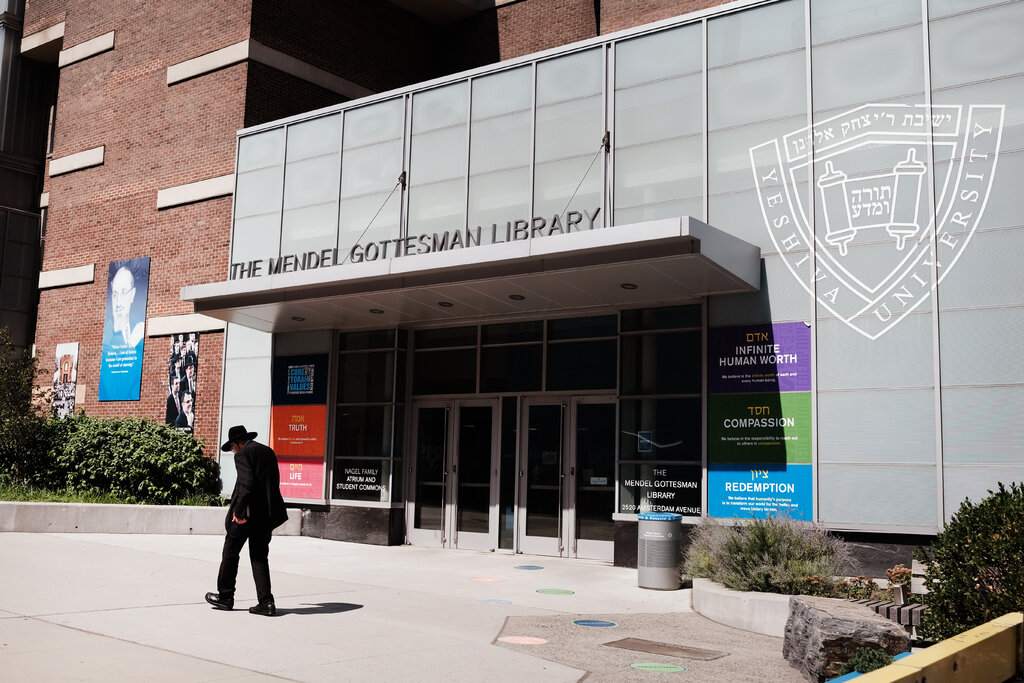 Justice Sonia Sotomayor said on Friday that Yeshiva University in Manhattan can for now disregard a state court ruling that ordered it to recognize an L.G.B.T. student club — a case she said could be considered by the full Supreme Court.

The ruling in State Supreme Court in Manhattan in June was celebrated by gay students and their supporters but was condemned by administrators at Yeshiva, America’s most prominent institution of Modern Orthodox Jewish higher education. They derided it as an attack on religious freedom and vowed to appeal; the university applied for an emergency stay late last month.

On Friday evening, Justice Sotomayor granted it. The justice, who has jurisdiction over the lower court, wrote that the state decision was “hereby stayed pending further order of the undersigned or of the court.”

The ruling suggests that the Supreme Court, which has taken an increasingly broad view of religious freedom in recent years, may take up the university’s case. Since Justice Amy Coney Barrett joined the court in 2020, petitioners in religious freedom cases have almost always prevailed there.

Yeshiva’s case is the latest skirmish in a heated and yearslong national battle over religious freedom, and whether institutions or even devout individuals can be compelled to provide public accommodation or services to people with differing views.

The university’s appeal has been closely watched by other religious organizations. A broad range of groups told the court this month that they intended to file briefs in support of Yeshiva, including the Roman Catholic Archdiocese of New York, the Church of Jesus Christ of Latter-day Saints, the United States Conference of Catholic Bishops and the Council for Christian Colleges and Universities.

In court documents, Jonathan Berry, a lawyer for that coalition, wrote that the Yeshiva case concerned whether religious educational institutions would be able “to live out their faiths and missions free from state interference.”

Without that protection, he wrote, “religious institutions may soon be forced to face the same impossible choice as Yeshiva University: abandon your faith or risk contempt or other legal penalties.”

The lower court in June had found that Yeshiva was not incorporated as a religious institution but as an educational one, and so must abide by New York City’s human rights law, which bars discrimination on the basis of sexual orientation. The university called the decision “obviously wrong” in June, and in its appeal it said it was nonsensical to view as secular an institution that is named after a type of traditional Jewish religious school and that emphasizes religion in its curriculum.

On Friday, its president, Rabbi Ari Berman, said the school wanted students of all sexual orientations and gender identities to feel comfortable on its campus, but it also wanted its identity as an institution grounded in Modern Orthodox Judaism to be taken seriously.

Many non-Orthodox Jewish congregations support L.G.B.T.Q. rights, with some performing same-sex marriages and choosing openly gay or transgender rabbis to tend to the spiritual life of their synagogues. Orthodox leaders, however, tend to interpret the Torah as calling for more traditional ideas of gender and sexuality.

“We are pleased with Justice Sotomayor’s ruling which protects our religious liberty and identity as a leading faith-based academic institution,” Rabbi Berman said in a statement. “But make no mistake, we will continue to strive to create an environment that welcomes all students, including those of our L.G.B.T.Q. community.”

Katie Rosenfeld, a lawyer for the Y.U. Pride Alliance, which has sought official recognition for several years, said the club would await the court’s final order.

“It remains committed to creating a safe space for L.G.B.T.Q. students on Y.U.’s campus to build community and support one another without being discriminated against,” she said.

Bina Davidson, the former president of the Pride Alliance, said in an interview in June that Yeshiva’s refusal to recognize the club had deprived it of important resources, including funding for speakers and the ability to advertise their events via an email system that included the entire student body. She said efforts to get an L.G.B.T. student club recognized began in 2009.

Yeshiva University says that its mission is to empower students to apply the values of the Torah in the modern world. In court documents, the university has outlined the ways in which Judaism shapes its curriculum and its student life.

The school encourages students to attend a program of intensive religious study in Israel, and 80 percent do, it said. It also requires male students to spend between one and six hours a day studying the Torah, and requires that doors on campus be adorned with a mezuza, a small religious scroll.

The university has been represented in this case by lawyers from the Becket Fund for Religious Liberty, a public-interest legal and education firm based in Washington, D.C.

In their application for an emergency stay, they wrote that Yeshiva’s policies and requirements were obvious indications of its status as a religious institution.

“Yeshiva shouldn’t have been forced to go all the way to the Supreme Court to receive such a common sense ruling in favor of its First Amendment rights,” Eric Baxter, the vice president of the Becket Fund and the lead attorney on the case.