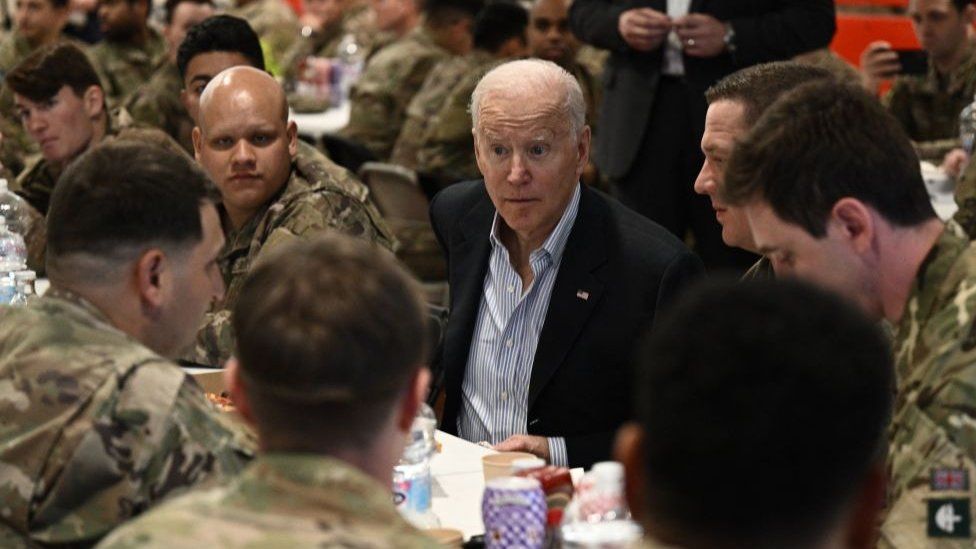 President Joe Biden hailed American military deployments to Europe as part of a struggle for democracy against autocracy during a visit to US troops in Poland.

His remarks come as the US and others have reinforced Nato’s eastern flank amid the war in Ukraine.

The stop at an airbase in Rzeszow, near the Ukrainian border, was part of Mr Biden’s trip to Europe to rally allies.

However, back home Mr Biden faces scepticism over his Ukraine response.

In his remarks to the troops on Friday, the president sought to portray their deployments as part of a wider “fight between democracies and oligarchs”.

“You are the finest fighting force in the history of the world,” he said. “What you’re doing is consequential.”

“What’s at stake is what your kids and grandkids are going to look like in terms of their freedom,” he said. “What you’re engaging in is much more than whether or not you can alleviate the pain and suffering of the people of Ukraine”.

Since February, the US has sent about 12,000 troops to Europe, many of them to Poland to help deter Russia from threatening Nato allies and to assist with humanitarian efforts. Thousands more have been redeployed east from existing US bases in Europe.

The deployments bring the total number of US troops in Europe – including both those on temporary missions and stationed there permanently – to 100,000 for the first time since 2005.

Mr Biden has repeatedly made clear, however, that the troops are in Europe to defend Nato allies and not to fight Russian forces. Earlier in March, he said that a “direct confrontation” between Nato and Russian forces would lead to “World War III” – a scenario he said must be prevented.

Earlier this week, Mr Biden met with Nato, EU and G7 leaders in Brussels to shore up a message of unity against Moscow’s invasion of its neighbour.

He is due to hold a bilateral meeting with Polish President Andrzej Duda on Saturday, and deliver a major address after meeting with Ukrainian refugees.

The trip comes as polls show that a majority of US voters are worried about his handling of the crisis in Ukraine.

Only about a quarter said they had confidence in his ability to handle a crisis or effectively manage the US military, according to an AP-NORC Center for Public Affairs Research poll, while 56% of Americans believe that Mr Biden’s response to Russia’s invasion of Ukraine has “not been tough enough”.

Another poll, from NPR/Ipsos, found that 45% of Americans believe Mr Biden is being too cautious. Over 60% said they want the US to give Ukraine the support it wants, while still wanting to avoid a larger conflict with Russia.

While no additional US troop deployments have been announced, earlier this week National Security Advisor Jake Sullivan said that troops levels in Europe are “a matter of constant reassessment” in the White House.

Next
War in Ukraine: Change of emphasis or admission of failure by Moscow?