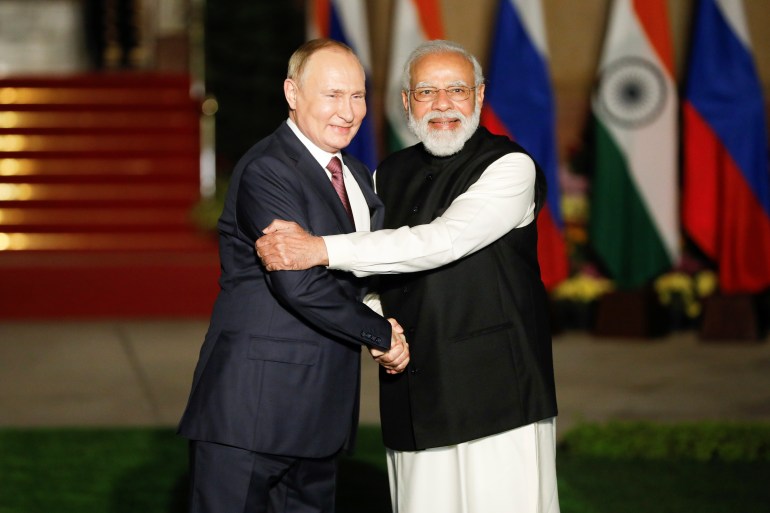 It has been almost two weeks since Russia began its assault on Ukraine, killing hundreds of people and displacing more than 2 million.

Besides generating a humanitarian crisis and sending shockwaves around the world, Russian President Vladimir Putin’s actions in Ukraine have also put the foreign policies of the countries in the spotlight.

While some countries, such as Germany, have completely shifted their defence and energy policies to reprimand Russia and secure the European borders, others like India continue to maintain a relatively restrictive stance towards old friend Russia.

But after the Russian invasion hit India closer to home, with the killing of an Indian student in Ukraine’s Kharkiv city, and hundreds of Indian students still awaiting evacuation, India’s Prime Minister Narendra Modi is under pressure to condemn Russia’s actions.

Last week, P Chidambaram, an Indian parliamentarian from the opposition Congress party, tweeted: “The Government of India should stop its verbal balancing act and sternly demand that Russia stop immediately the bombing of key cities in Ukraine.”

Meanwhile, Modi has held talks with both Putin and Ukrainian President Volodymyr Zelenskyy and called for an immediate cessation of violence.

Yet, on the global stage, India has abstained five times so far from condemning Russia’s actions at the United Nations and only reiterated a “commitment to the principles of the UN Charter, to international law and respect for sovereignty and territorial integrity of all states”.

India’s balancing act of appeasing both Russia and the West in the Ukraine crisis has caught the European Union off-guard.

According to Indian media reports last week, EU envoys together with Ukraine’s envoy to New Delhi met senior Indian foreign ministry officials before a landmark vote in the UN General Assembly and urged India to adopt a stronger position on the conflict.

French President Emmanuel Macron also held consultations with Modi on the matter. France currently holds the presidency of the Council of the EU and a proactive Macron has been holding regular talks with EU leaders and global leaders to de-escalate the crisis.

After Macron’s call with Modi, a statement released by the French embassy in India said the two leaders agreed to “ensure unhindered humanitarian access” to Ukraine and coordinate on addressing the crisis at the UN Security Council.

In recent years, India has been bolstering ties with the EU to ward off threats from China. At the recent Indo-Pacific Forum, EU foreign ministers and Indian Foreign Minister Subrahmanyam Jaishankar agreed to deepen security relations by coordinating maritime presence in the Indian Ocean and enhancing cybersecurity.

Garima Mohan, fellow at the Asia Program of the German Marshall Fund of the United States, says while Europe-India ties have made a lot of progress in recent years, India might have to re-evaluate its stance on the Russian invasion of Ukraine.

“European officials working with India are disappointed but certainly understand its position. The official line is everything is business-as-usual with India. But for political actors and European publics not familiar with Indian foreign policy, it will be a hard sell,” she told Al Jazeera.

“It is important to note that India’s position is evolving and as the crisis accelerates, India will have to re-evaluate its response,” she said.

“However, Sino-Russian closeness may have certain repercussions for India.”

Moscow has appreciated New Delhi’s cautious position on the Ukraine crisis, with India not featuring in a list of “unfriendly countries” drawn by the Kremlin following a series of sanctions imposed by the EU, the US and the United Kingdom.

However, India’s stance towards Russia on the Ukraine war is not new. Even in 2014, when Russia annexed Crimea, India had maintained neutrality at the UN.

Michael Kugelman, senior fellow for South Asia at the Wilson Center in Washington, DC, says India’s stance is a consequence of its special relationship with Russia.

“New Delhi has long viewed Moscow as its most reliable and trusted partner, a perception shaped by many decades of friendship, going back to the early years of the Cold War,” he told Al Jazeera.

“Indian leaders often speak of Russia as India’s closest and most reliable friend, a country that has never had any sort of crisis with India. And they see it as a country always willing to help India out on the global stage, including at the UN, where Russia’s voting patterns on issues like Kashmir have supported India.”

According to Kugelman, India’s Cold War nostalgia towards Russia continues to weigh in in their relationship. “It boils down to a simple calculation: Russia has our back and we will have its back as well,” he said.

Vivek Mishra, fellow at Observer Research Foundation (ORF) in New Delhi, says India’s diplomatic position on Ukraine could be beneficial and that there has been a “graded maturity” in India’s strategic autonomy.

“India’s foreign policy has evolved from non-alignment to embracing strategic autonomy in defence and security policies. This crisis has displayed exactly that with India discussing the crisis with EU and the US, abstaining from taking a stance on the conflict in the UN, and talking to both Russia and Ukraine,” Mishra told .

The question is: if China weighs in on the Ukraine crisis, will India support the West?

So far, China, like rival India, has also been playing a balancing act between Russia and the West.

However, China’s growing closeness with Russia in recent years is something India has been monitoring closely, according to ORF’s Mishra.

“Even if China weighs in more than it already has on the Ukraine-Russia conflict, India would continue to maintain its neutral stance. China is an imminent threat to India, so India won’t want to humour Russia in a way which would threaten its national interests,” he added.

Kugelman thinks if anything were to prompt India to change its position, it would be the course of events, not the decisions of other countries.

“EU pressure is unlikely to influence India’s foreign policy. The essence of India’s cherished principle of strategic autonomy is that it won’t cave to pressure from major powers to take a particular position or to align with a particular camp,” he told Al Jazeera.

Kugelman said India makes foreign policy decisions “on its own terms” and there is not much that other countries, including its closest partners, can do to change that.

“But if Putin expands his invasion into a NATO territory, all bets would be off and at that point, India would likely have no choice but to come out and condemn what would effectively be a new world war.” 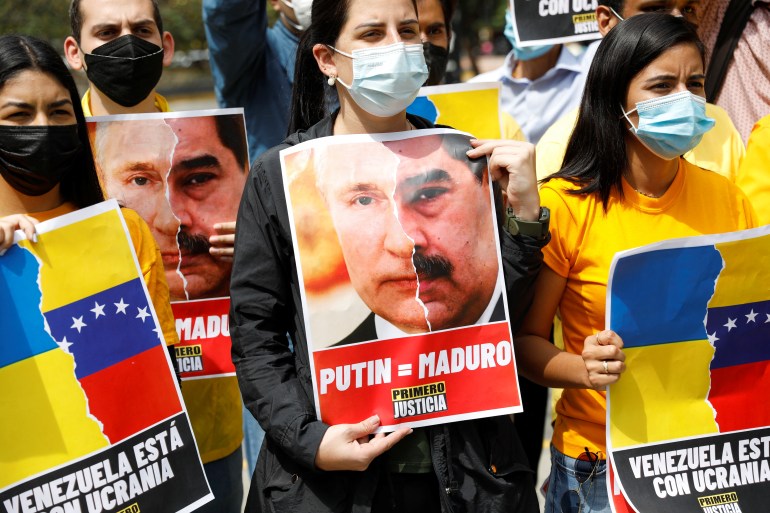 Next
Venezuela frees at least two jailed US citizens after talks