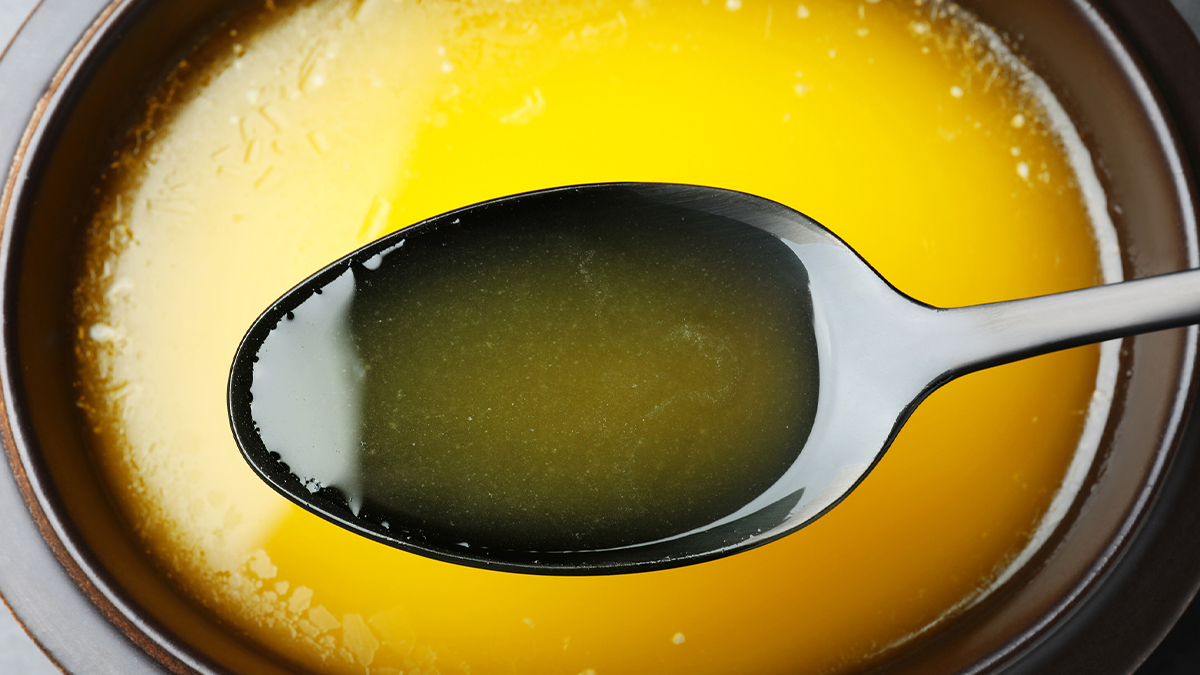 The kind of butter we buy is usually a simple choice between spreadable, stick, salted, and unsalted varieties. In fact, most of us probably don’t think twice about which specific type is best for our different cooking needs.

However, when it comes to searing and roasting, you might be surprised to learn that clarified butter is the best option for withstanding high heat without burning.

What is clarified butter?

We’ve all probably eaten clarified butter without realizing it. It’s often used in hollandaise sauce for Eggs Benedict and for dipping seafood, like crab legs and lobster. While it looks like plain melted butter, it’s far from that.

The experts at Land O’Lakes explained that all butter is made up of three components: water, butterfat, and milk solids. When the butter is melted down and the milk solids and water are removed, all that’s left is the butterfat — which is also known as clarified butter.

Clarified butter often gets confused with ghee, the keto diet staple that’s traditionally used in Indian cuisine. Although they’re similar, the experts at What’s Cooking America noted that ghee has been cooked longer to remove all moisture and caramelize the milk solids, not remove them. As a result, it has a nuttier taste and an extended shelf-life both in the fridge and at room temperature.

Why should we use clarified butter for roasting and searing?

Rendering out water and milk solids gives clarified butter a higher smoke point, making it ideal for roasting and searing. Otherwise, the milk could burn during cooking and leave a slightly bitter aftertaste on your dish.

It’s not as easy to find in stores as regular butter or ghee, but it is pretty simple to make clarified butter from scratch — and it’s definitely worth having a batch of it on hand for all of our roasting and searing needs!

How to Make Clarified Butter

Carl Hanson, senior editor of AllRecipes, shares a simple method for making clarified butter at home. To make one cup of it, you’ll need 2 1/2 sticks of unsalted butter to start. He mentioned that about 25 percent of the butter’s original volume will be lost when clarifying it.

Place the butter in a saucepan over low heat and let it melt slowly without stirring it. Allow the butter to separate as it’s melting. After about three or four minutes, skim off the top layer of white foam with a spoon and discard it.

Then take the pan off the heat and let it cool for about five minutes. Do a final skim of any solids that rise to the surface and slowly pour the clear butterfat into a glass liquid measuring cup.

Line a fine mesh strainer with a few layers of cheesecloth. Place the strainer over a heat-proof bowl and pour the butterfat into the cloth to ensure that the clarified butter is completely clear. Watch their video below to see how simple it is to make at home:

When it’s time to make a yummy roasted chicken, let the butter come to room temperature (if it’s kept in the fridge) and then smear two tablespoons of it over the meat before putting it in the oven. This allows the chicken skin to get crispy and golden brown as it’s roasting. The same can be done if you’re making roasted carrots, potatoes, or cauliflower as a side dish.

Most of us reach for vegetable or olive oil for searing meat before letting it cook low and slow in the oven. But for something like a leg of lamb, substituting that oil for clarified butter is an easy tweak to make a more flavorful roast. All it takes is melting about three tablespoons of the butter in a pan on medium heat and searing the meat on both sides for about five or six minutes until it’s browned.

There’s really no right or wrong way to cook with clarified butter, so get creative with how you use it! Save the regular sticks of butter for spreading onto bread or quickly frying up some eggs for breakfast.

Next
Hailey Bieber Has Finally Announced A Launch Date For Her Beauty Brand, Rhode