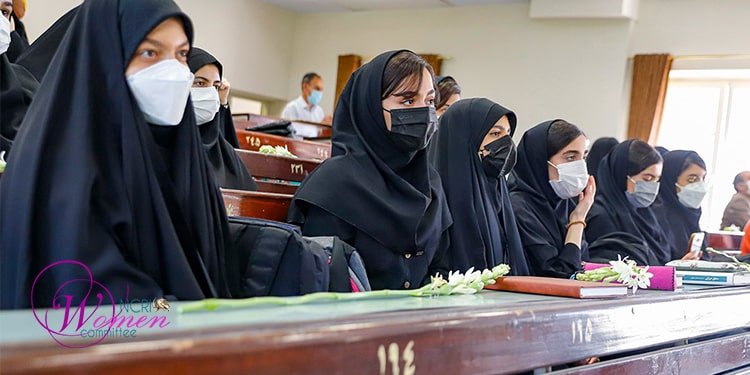 Universities reopen as female students are pressured to wear Maghna’eh

As universities reopen in Iran, security officials at Tehran University pressured female students to wear the Maghna’eh, which is a black cloth covering their head, forehead, chin and chest.

A group of female students attending the Tehran University reported this as universities reopened on Sunday, April 3.

This incident follows growing pressure and repression on Iranian women and girls at the behest of Raisi, the president of the mullahs’ regime.

In his remarks to a gathering in Khorasan Razavi Province, Ebrahim Raisi stressed the need to crack down on women in different ways, saying, “Nearly 28 systems have responsibilities related to the enforcement of the chastity and hijab plan.” (The state-run Mehr news agency – April 1, 2022)

Alam ul-Hoda, Khamenei’s representative in Mashhad, also called those who protest the compulsory hijab as enemies of God.

He said those people who call supporters of Hijab as anti-woman and dub those who deal with unveiling and forbid evil as violent; they are the enemies of God. (The state-run ISNA news agency – April 1, 2022)

Earlier, Hossein Ashtari, Commander of the State Security Force (SSF), called women’s defiance of the mandatory hijab as “norm-breaking.” He emphasized the need to repress women to the maximum possible extent, and added, “If some people want to act tough with the police, our agents will have to deal with them.” (The state-run Tasnim news agency – March 28, 2022)