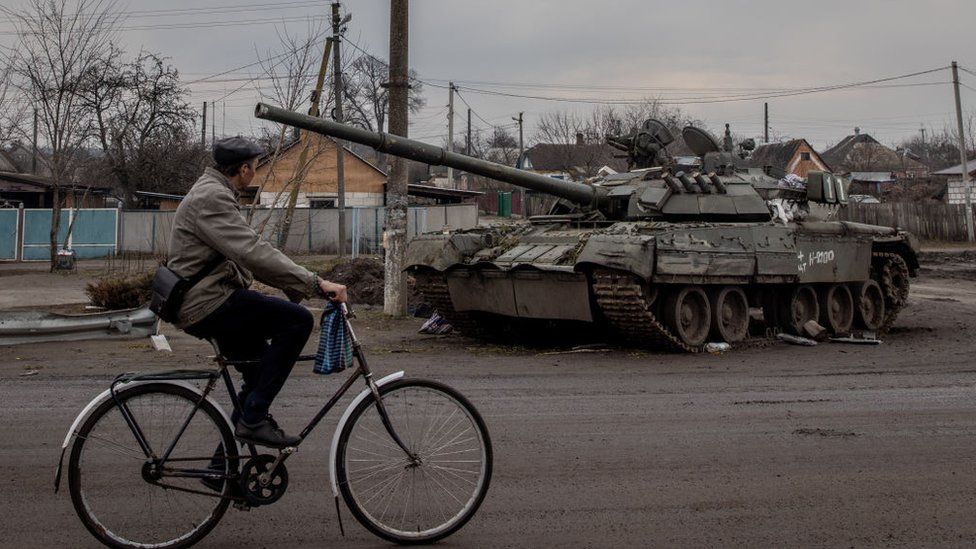 Russian forces in Ukraine are regrouping to double down on their attacks in the east of the country, according to Nato’s secretary general.

His statement came after Russia’s assertion on Tuesday that it would “radically” reduce military activity around the capital Kyiv and Chernihiv.

He said Russia’s troop movements did not amount to a withdrawal.

Moscow says it is now focusing on “liberating” the Donbas region, in Ukraine’s south-east.

Speaking during a press conference on Thursday, Mr Stoltenberg said “we see continued shelling of cities and we see that Russia is re-positioning some of the troops, moving some of them around, most likely to reinforce their efforts in the Donbas region.

“At the same time, Russia maintains pressure on Kyiv and other cities. So we can expect additional offensive actions, bringing even more suffering.”

He added that Russia’s aim of pursuing a military outcome had not changed.

Echoing Mr Stoltenberg’s remarks, the UK’s Defence Secretary warned that Russia’s change in tactics was “not a retreat”, and that it was “changing its focus” after its first efforts were rebutted.

Around 20% of Russian troops around Kyiv have started to reposition, according to a US senior defence official.

The official added that the Russians have largely abandoned Hostomel airport, outside of Kyiv, and are also moving away from the Chernobyl nuclear plant.

Despite this, they said that as troops on the ground dispersed somewhat, Russia is keeping the pressure on in the air, with air strikes continuing to fall on the cities of Kyiv and Chernihiv in the north.

Is the Ukraine-Russia meeting a path forward or political sideshow?

Bombs are also falling on towns and cities in the south, which is becoming the key battlefront, according to Ukrainian interior ministry adviser Vadym Denysenko, cited by Reuters news agency.

Though US intelligence reports say Russian troops have not made much progress in the east since the invasion began, Russia has said it will now concentrate its efforts on “liberating” the region.

The region is home to the self-declared and Russian-backed people’s republics of Luhansk and Donetsk, which are part of Ukraine but which Russia recognised as independent three days before invading.

But Ukrainian troops have “stymied” and “frustrated” Russia’s progress in the region, said the US defence intelligence official.

They added it remains to be seen whether the refitting and repositioning of troops will make a difference. But that this could mean the conflict is lengthy and more drawn out.