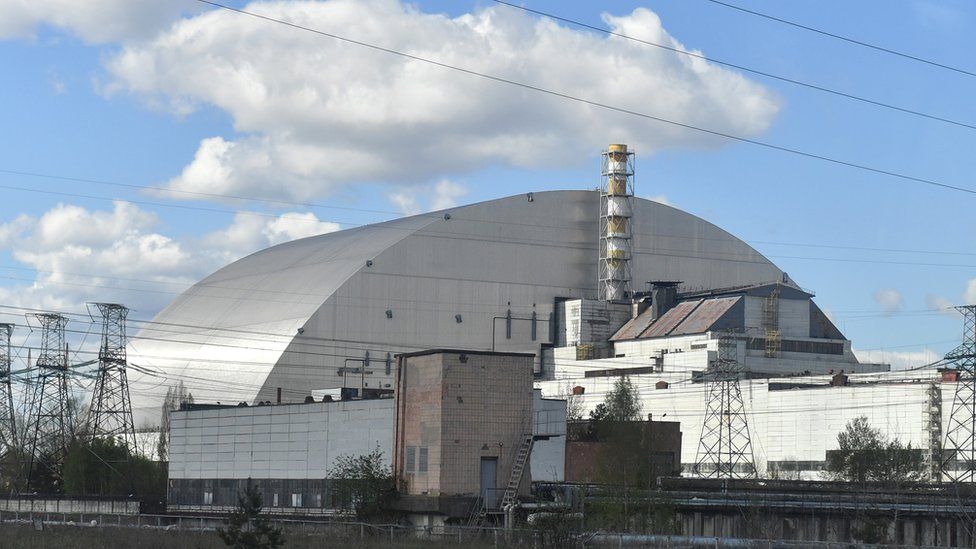 Many of the Russian troops occupying the former nuclear power plant at Chernobyl have left, Ukraine’s state nuclear company says.

Energoatom said two columns of Russian forces had set off towards the Belarusian border, leaving just a few at the site.

The announcement appears to confirm reports by senior US defence officials on Wednesday of a withdrawal.

Russian troops seized Chernobyl at the beginning of their invasion of Ukraine.

“This morning, the invaders announced their intentions to leave the Chernobyl nuclear power plant,” Energoatom said in a statement.

Reuters news agency quoted workers at the plant as saying some of the soldiers had no idea they were in a radiation zone.

The Russian military, however, said that after capturing the plant radiation levels at the plant itself had stayed within a normal range.

While “Chernobyl” is a word that evokes apocalypse, nuclear experts stressed throughout this saga that there was no risk of “another Chernobyl”.

There is no working nuclear reactor on the site. As Prof Claire Corkhill from Sheffield University told me at the time, even if buildings containing contaminated material were pierced “we wouldn’t be talking about plumes of radioactive smoke”.

She was much more concerned when Russian forces attacked a building at the working Zaporizhzhia nuclear facility on 4 March. That incident caused the director general of the International Atomic Energy Agency (IAEA) to plan a trip to Ukraine – essentially to ask Russian forces to keep nuclear facilities out of the line of fire.

“What is a concern in Chernobyl now,” Prof Corkhill told me, “is that we haven’t had regular communication between the site and the IAEA, which basically keeps a [safety log] of where any potentially hazardous material is. We now need to go in and establish that none of that material is missing.”

Other scientists are concerned about the damage that may have been caused to a place that has become a wildlife refuge and a site of international research collaboration.

Prof Nick Beresford, who studies the exclusion zone’s landscape, says his Ukrainian colleagues now don’t know if they will have labs to return to. “The zone itself, over the last nearly 40 years, has become a site for wildlife,” he added.

“Lots of rare species moved in when people moved out. We just don’t know how this will have affected the wildlife.”

In recent days Russia has said it will scale down its operations in northern Ukraine around the capital Kyiv and focus its forces on the eastern Donbas region. Chernobyl is located north of Kyiv.

But on Thursday Nato Secretary General Jens Stoltenberg said Moscow was repositioning rather than withdrawing in order to regroup, resupply and reinforce its offensive in Donbas.

“At the same time, Russia maintains pressure on Kyiv and other cities. So we can expect additional offensive actions, bringing even more suffering,” he said.

There was no change in Russia’s objective to pursue a military outcome, he added.

The occupation of the Chernobyl site since 24 February, the day of the invasion, has been dogged with concerns about power outages and problems for the staff, many of whom were trapped there for weeks and could not get home.

It is the site of what is considered to be the world’s worst nuclear accident in 1986.

The Russian withdrawal follows an announcement several days ago by the mayor of Slavutych, a nearby town housing workers at the plant, that Russian troops had left the town.