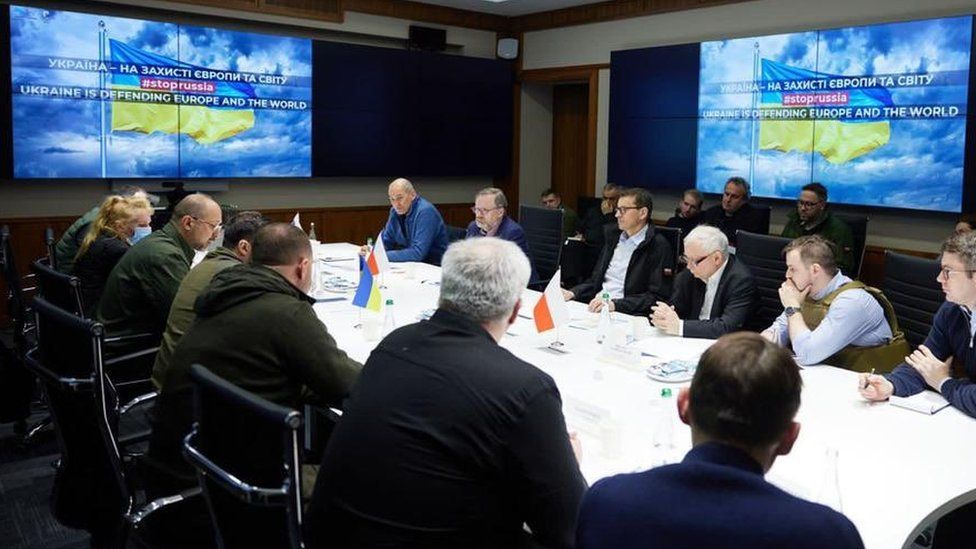 Ukraine has praised the courage of three European leaders who made a long, hazardous journey by rail from Poland to Kyiv in a show of support as the city came under further Russian attack.

The prime ministers of Poland, Slovenia and the Czech Republic met Ukraine’s President Volodymyr Zelensky on Tuesday evening as a curfew began in Kyiv.

Afterwards, the Czech leader told Ukrainians that they are “not alone”.

The group are the first Western leaders to visit Ukraine since Russia invaded.

“We admire your brave fight,” Petr Fiala wrote in a tweet. “We know that you’re also fighting for our lives. You’re not alone, our countries stand by your side.”

Poland’s Mateusz Morawiecki said that Europe would never be the same if it lost Ukraine. Instead, he wrote, it would be a “defeated, humiliated and pathetic version of its former self”.

“Your visit is a powerful expression of support for Ukraine,” the country’s president is quoted as telling the group.

Ukraine’s Prime Minister Denys Shmyhal wrote on Twitter that “devastating” sanctions against Russia had been discussed, including the “recognition of Russia as a sponsor of terrorism”.

As the talks took place, loud explosions could be heard across Kyiv from fighting on the western edge of the capital.

The European Union said the politicians were not carrying any particular mandate, but that leaders in Brussels were aware of the trip, as it was mentioned during an informal EU summit in Versailles, France, last week.

Poland’s deputy foreign minister Marcin Przydacz admitted the trip was risky, but said it was “worth taking for the sake of values”. He said they had told the Russians the visit was taking place.

The leaders decided to travel by train because flying by Polish military jet could have been viewed by Russia as dangerously provocative, BBC Europe editor Katya Adler reports. It was not immediately clear when their train would make the return trip to Warsaw.

Ukraine’s president has repeatedly called on Nato to impose a no-fly zone over his country’s airspace, but Nato has refused.

Elon Musk credits ‘The Simpsons’ for predicting his Twitter takeover

Mr Zelensky said Ukrainians now understood they could not join Nato. “We have heard for years that the doors were open, but we also heard that we could not join. It’s a truth and it must be recognised. I am glad that our people are beginning to understand this and rely on themselves and our partners who help us.”

At least five people were killed in Russia’s bombardment of Kyiv on Tuesday, and Mayor Vitali Klitschko ordered a curfew to run from 20:00 (18:00 GMT) on Tuesday to 07:00 on Thursday. The city was facing a difficult and dangerous moment, he said: “This is why I ask all Kyivites to get prepared to stay at home for two days, or if the sirens go off, in the shelters.

The three prime ministers were joined by Jaroslaw Kaczynski, the leader of Poland’s ruling Law and Justice party. Polish officials pointed out that his late twin brother and former president Lech Kaczynski had taken part in another risky trip to Georgia in 2008, during Russia’s summer invasion.

During the meeting in Kyiv, Mr Kaczynski said an international peacekeeping mission with military capability should be sent to Ukraine.

All three leaders have been vocal supporters of Ukraine in recent weeks. Slovenia’s prime minister said last week that the EU should send a strong message that Ukraine will eventually be granted membership.

Czech Foreign Minister Jan Lipavsky said the visit was a strong and important gesture to show solidarity with Ukraine. “Ukraine’s security is European security; therefore we need to do everything possible to help them survive this sickening barbaric Russian attack,” he told the BBC.