The Russians launched their attack on Thursday from three main directions: north, south and east.

Dozens of targets have been struck, as Russian troops have poured into Ukraine.

The fight for Kyiv

Russian forces arrived near Obolon on the outskirts of Kyiv on Friday, but so far have not advanced into the centre of the capital.

Russian troops now control a narrow path across the Dnieper river into the east of Kyiv, according to the Institute for the Study of War.

Overnight there were reports of clashes with so-called saboteur groups on the city streets – and an oil depot was hit at Vasylkiv south of the city.

A residential block in the suburb of Bucha was hit by shelling.

On Saturday there were explosions in the west of the city near Peremohy Avenue and a residential apartment building was hit by a missile.

There has also been fierce fighting at Hostomel airport, to the west of Kyiv.

Russia is now in full control of significant parts of Ukraine’s territory.

After Ukraine’s air defences and other military infrastructure came under attack on Thursday, columns of tanks moved into position, backed up by artillery and air power.

Troops have spread across parts of the north, east and south, with missile strikes and artillery clearing the way for advancing Russian forces.

Strike from the north

From the north, Russian troops crossed the border into Ukraine at the three-way junction between Ukraine, Russia and Belarus, at Senkivka.

In recent weeks, a huge deployment of Russian troops gathered close to Novye Yurkovichi and Troebortno, including “the entire 41st army”, according to Michael Kofman of the US-based Center for Naval Analyses.

Reports say some forces have bypassed the area to continue moving south.

A second, more rapid advance has come down the west side of the Dnieper river via Chernobyl, taking control of a large area to the north and west of Kyiv.

Strike from the east

Russian forces have breached Kharkiv. On Sunday morning there were reports of street fighting and explosions.

Later in the day, Ukrainian officials said the Russian attack had been repelled.

Reports say the shelling is continuing around Donetsk, which has come under attack from troops crossing from Belgorod in western Russia.

There are thought to be about 15,000 Russian-backed separatists in Donetsk and Luhansk, who may help a Russian advance. Ukraine believes the figure is higher.

377A: Singapore to end ban on gay sex

Fighting has also continued around Sumy.

Strike from the south

Russian forces have made a rapid advance from Crimea, moving north east and north west.

To the north east, there has been heavy fighting around Mariupol, a major port.

On Saturday, Russian forces conducted an amphibious assault from the Sea of Azov on the city’s western side.

An advance from Mariupol to the east would create a land bridge between Crimea and territory held by pro-Russian separatists in Donetsk and Luhansk.

The Russian defence ministry claims its troops entered Melitopol without resistance – although western officials suggested it is still in Ukrainian hands.

Russia also says that it has encircled the town of Berdyansk to the west of Mariupol.

Ukrainian forces have held the city of Kherson after heavy fighting and say they have thwarted an attempted amphibious landing by Russian troops in Odesa.

In the days leading up to the invasion, Russia positioned landing ships capable of deploying main battle tanks, armoured vehicles and personnel, off the Ukrainian coast in a major build-up in the Black Sea and the Sea of Azov. 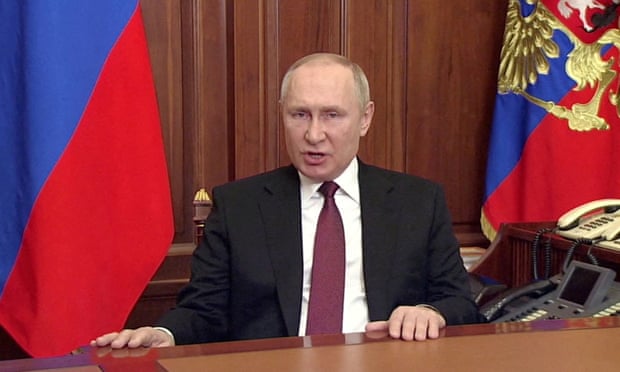