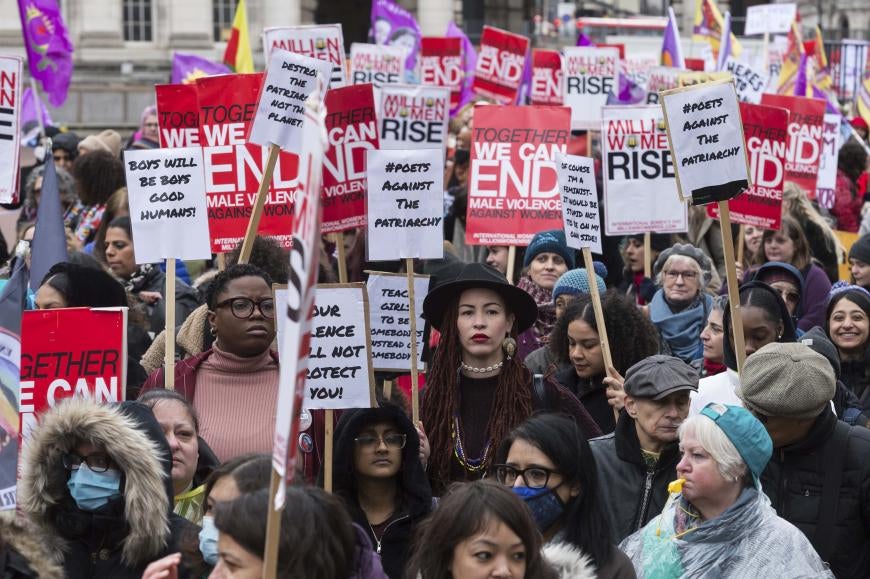 Share
Home
News
UK: Tackling Violence against Some Women, But Not All

(London) – The United Kingdom government is set to tarnish its own landmark advancement on violence against women by excluding migrant women from key protections. This perpetuates longstanding barriers for migrant women whose residency status depends on their abusers, as they may fear expulsion from the UK if they seek help for domestic violence.

More than 10 years after signing the convention, the UK government has pledged to ratify the Council of Europe Convention on Preventing and Combating Violence against Women, known as the Istanbul Convention, by July 31, 2022. However, it plans to do so with reservations to two articles, one of which requires measures to ensure that migrant women victims of violence are not forced to remain reliant on abusers for their residency status.

“After a decade of promises, the UK government is casting a shadow over what should be a landmark rights victory by excluding some of the most marginalized women from lifesaving protections from violence,” said Hillary Margolis, senior women’s rights researcher at Human Rights Watch. “No woman should have to choose between escaping abuse and possibly being deported.”

On May 17, Home Secretary Priti Patel announced the government’s plans to ratify the convention with reservations to Articles 44 and 59, meaning the government intends to modify or exclude its legal obligations to comply with those provisions.

Article 44 relates to prosecution of UK citizens or residents for crimes committed outside of UK territory. Article 59 compels countries to enact measures to protect migrant victims of violence whose residency status is dependent on that of a spouse or partner who is or becomes abusive. This includes providing autonomous residence permits and suspending deportation proceedings to permit victims to apply for such permits.

The UK government’s reservation to Article 59 will continue to leave migrant women who depend on their abusers without assured access to crucial support and a pathway to escape violence, putting their health and lives at ongoing risk, Human Rights Watch said.

Patel said the government will apply a reservation to Article 59 while awaiting the evaluation of the Support for Migrant Victims scheme, a pilot project introduced alongside the Domestic Violence Act of 2021 to support a limited number of women who cannot access public benefits. People on visas tied to spouses or fiancés have “No Recourse to Public Funds” under the Immigration and Asylum Act 1999, making them ineligible for most government benefits, which often includes refuge spaces.

The Support for Migrant Victims scheme, which concluded in March, was roundly criticized by key organizations led by-and-for Black and minoritised and migrant women as “wholly inadequate” both in scope and in substance to meet the needs of migrant women victims of violence.

Significant evidence already points to the need for greater protections for migrant women victims of violence with precarious residency status. In research by the Latin American Women’s Rights Service, 62 percent of migrant women in London surveyed said their abusers had threatened deportation if they reported the abuse to authorities.

Southall Black Sisters, which ran the Support for Migrant Victims Scheme, has reported that over 60 percent of women seeking their assistance have insecure immigration status. Research from the office of the Domestic Abuse Commissioner for England and Wales highlights that women in such circumstances are less likely to seek or benefit from services or escape abuse.

The UK has long positioned itself as a champion of tackling violence against women and girls internationally, but has faced mounting evidence of inadequate prevention, response, and accountability measures domestically and failure to prioritize combating it at home. Partners or former partners killed 214 women – more than one a week – in England and Wales during the three years ending March 2020. Police recorded nearly 1.5 million domestic abuse-related incidents and crimes in the year ending March 2021. Years of campaigning by women’s sector organizations, led by IC Change, have preceded ratification.

Rejecting a guaranteed pathway to autonomous residency for migrant women who are victims of violence follows years of a “hostile environment” policy by the UK government, a series of immigration policies that target undocumented people and block their access to work, housing, health care, education, and other key benefits. Organizations that work to prevent and respond to violence against women have cited the hostile environment policy as a deterrent to migrant women victims of violence coming forward and accessing lifesaving services as well as a means of control by abusers.

Over 80 organizations, including Human Rights Watch, sent a letter to the home secretary on May 30 calling for ratification without reservations. A June report from the House of Lords International Agreements Committee said it sees no justification for the reservation to Article 59 and calls on the government to withdraw it.

In a July 1 letter to the home secretary, the chairs of the Joint Committee on Human Rights, Home Affairs Committee, and Women and Equalities Committee called for a commitment to revisit and ultimately withdraw the reservation, noting “serious concerns that the issue of non-discrimination will continue to remain unaddressed and vulnerable women will remain at risk.”

The Istanbul Convention establishes robust, legally binding standards for governments to prevent violence against all women and girls, support survivors, and hold abusers to account. It is notably inclusive and comprehensive, and requires protections for all victims of violence, regardless of age, ethnicity, sexual orientation, disability, immigration status, or other characteristics.

Thirty-six countries have ratified the convention. Turkey was the target of international condemnation when it withdrew from the convention in 2021, despite its ongoing failure to effectively protect domestic violence victims. Nine countries have ratified with a reservation to Article 59, including Armenia, Cyprus, Germany, Liechtenstein, Malta, Monaco, North Macedonia, Romania, and Slovenia. Germany is the only country to provide a substantive explanation: its national law differs from the convention but includes measures to suspend expulsion from the country and permit application for autonomous residency for migrant victims of violence.

The government should ensure that all women in the UK are equally protected from violence by ratifying the convention without reservations and move urgently to fully carry out its provisions equally for all women and girls.

“The Istanbul Convention is momentous because it encompasses all women and girls, not just those the government deems entitled to the full scope of protections from violence,” Margolis said. “The UK government is at risk of perpetuating a system in which some are perceived as less worthy of support than others, and going against the very spirit of the convention and its fundamental principle of protecting every woman and girl.”

Next
Does Eating Mango Make You Gain Weight?