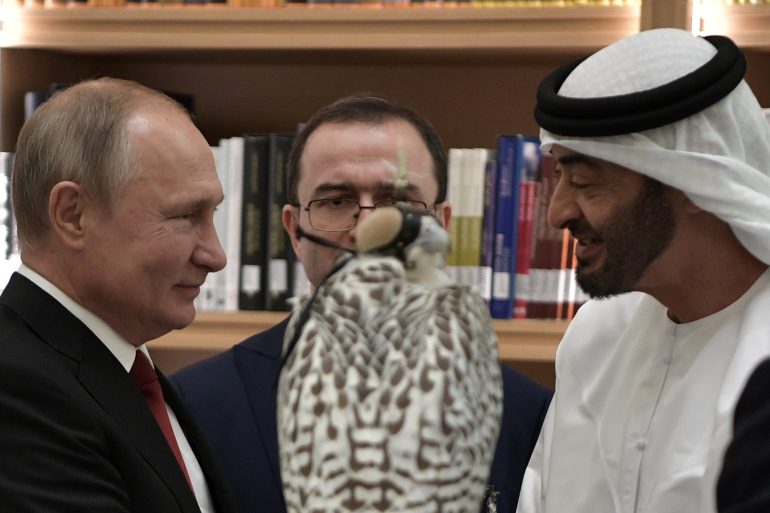 As the Western world moves to diplomatically isolate Russia amid widespread global condemnation over its war on Ukraine, the United Arab Emirates (UAE) stands out as one of a few countries keen to maintain a neutral, if not supportive, stance towards Moscow.

On Wednesday, it was among an overwhelming majority of states that backed a resolution at an emergency session of the United Nations General Assembly (UNGA) reprimanding Russia over its invasion of Ukraine and demanding Moscow immediately withdraw its forces.

That stood in stark contrast with its decision on Friday during a UN Security Council (UNSC) meeting to abstain from a vote on a similar text.

In a Twitter post on Sunday, UAE presidential adviser Anwar Gargash said the Gulf state “believes that taking sides would only lead to more violence” and that the UAE’s priority was to “encourage all parties to resort to diplomatic action”.

Unlike UNGA resolutions – which have political weight but are generally non-binding – those adopted by the UNSC, where Russia has veto power, are more consequential.

“Right now, we recognise that this resolution adopted here today is a necessary signal of where we need to be going,” the UAE’s UN envoy Lana Nusseibeh said on Wednesday, a day after calling for “space for a diplomatic off-ramp” to be maintained and “channels” to remain open.

According to Andreas Krieg, an associate professor at the School of Security Studies at King’s College London, the UAE’s disparate votes reflect a “balancing act” it has chosen to adopt towards the Ukraine-Russia crisis and wider foreign policy issues.

Highlighting the UAE’s keenness to support Russia while appearing neutral in the conflict, Krieg pointed out that its vote in favour of the more symbolic UNGA resolution was because it was “less likely to antagonise Russia” compared to the UNSC one.

Although the UAE, which this month assumed the UNSC’s presidency, has long been a US ally that supported its regional and international policies, analysts say its stance on the crisis raging in Europe underlines a shift and an attempt to balance relations in a new world order where Moscow – and Beijing – are equally important for the Gulf state.

“Abu Dhabi seeks to conduct a flexible foreign policy in which its relationships are diversified beyond the UAE’s Western partnerships,” said Giorgio Cafiero, CEO and founder of Gulf State Analytics, a geopolitical risk consultancy focused on the Gulf region.

“Looking ahead, it expects China, Russia and India to play more influential roles as rising global powers filling a void left by the Americans.”

But by abstaining from Friday’s vote, the UAE chose not to respond to Washington’s pleas. And on Thursday, Yousef al-Otaiba, the UAE ambassador to the US, acknowledged that the relationship between Abu Dhabi and Washington was going through “a stress test”, but expressed confidence both would “get out of it”.

Cafiero said that because the UAE sees Russia as a key partner, it has been “carefully navigating the Ukraine conflict” so as to avoid problems with Moscow that might harm their relationship “just to please Washington”.

Reflecting this balancing act, the UAE on Thursday said Ukrainian nationals could get visas on arrival, an apparent reversal of a decision earlier this week to suspend visa waivers for Ukrainians as more than one million people flee the war.

On Wednesday, the UAE also announced it would provide $5m in humanitarian aid to Ukrainian civilians in response to an appeal by the UN Human Rights Council.

According to Matthew Hedges, a PhD student at Durham University with a focus on the Gulf region, the UAE’s recent actions “only increase awareness of Abu Dhabi’s strong alliance with Moscow.”

Krieg agreed that as the UAE “increasingly pivots away from the West and liberal world order to a new order which includes China and Russia”, it views its ties with Moscow as “very important” and itself “as a geostrategic and geopolitical partner of Russia”.

At the same time, “the UAE is a key enabler of Russia in the Middle East”, Krieg noted, adding that UAE support has been important to Russia’s roles in Libya and Syria, and involvement in Yemen and sub-Saharan Africa.

According to a November 2020 report issued by the US Pentagon’s inspector general for counterterrorism operations in Africa, the UAE was suspected of being a significant source of finance for the Russian mercenary group Wagner in Libya.

Russia, which deployed more than 63,000 Russian military personnel to Syria, has been a staunch ally of President Bashar al-Assad during the country’s decade long war. Its intervention in 2015 by launching air attacks in support of al-Assad marked a turning point in the conflict and enabled pro-government forces to wrest back lost territory from rebels.

Krieg explained, however, that despite this partnership, the UAE was unlikely to intervene directly in Ukraine, but would instead support Russia by helping its “oligarchs and the deep state around Putin … to bypass sanctions”.

Canada, the EU, the UK, the US, among others, unveiled a series of sanctions against Russia over the past week, targeting banks, oil refineries and military exports.