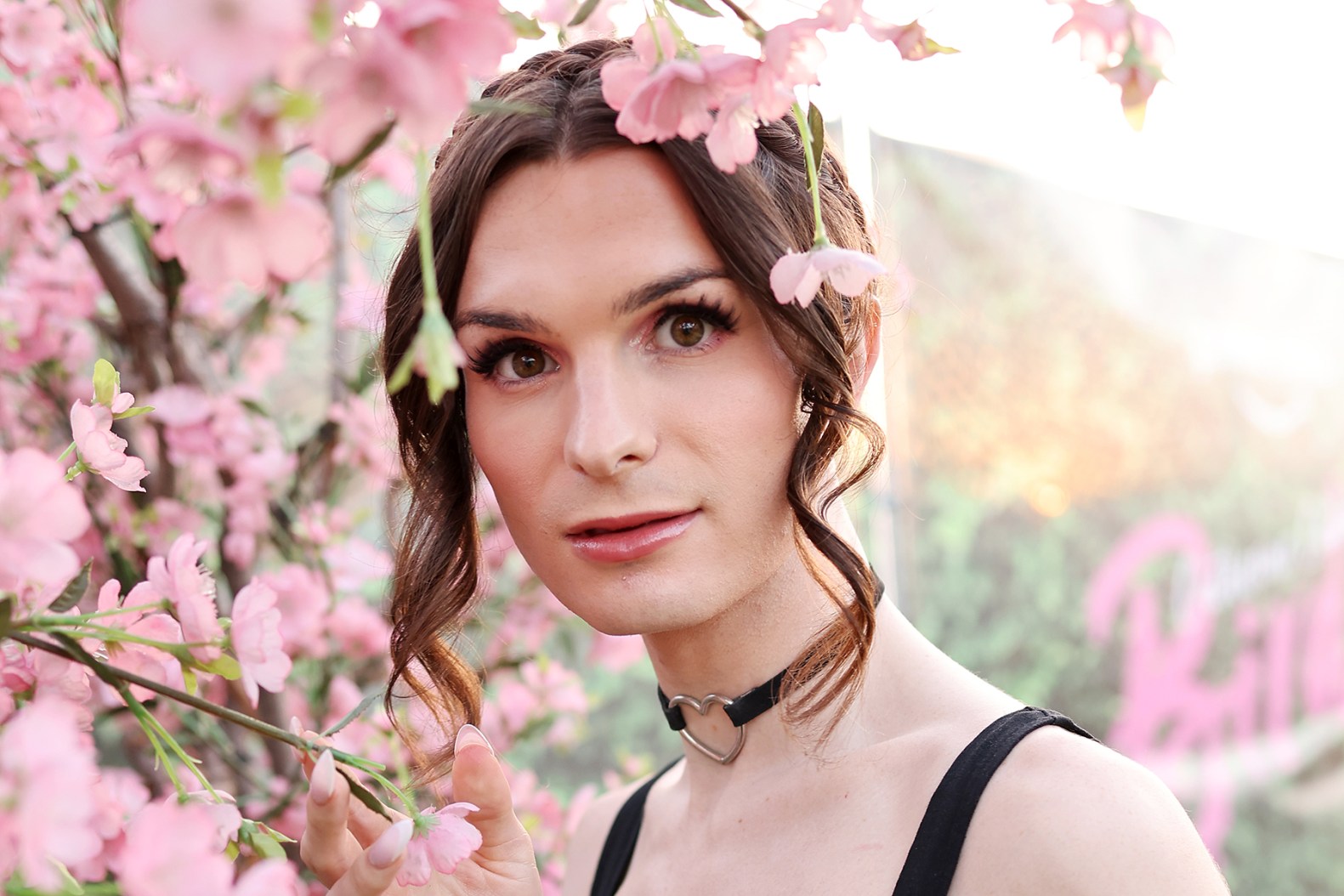 Cole, 18, who campaigns against fast-tracking minors onto puberty blockers after her own bad experiences with the drugs, said Mulvaney’s elevated platform in Washington DC sent a worrying message to teens.

Mulvaney, 25, who showcases her own transition into ‘girlhood’ to 8.4 million TikTok followers, was part of a panel of progressive campaigners who recently interviewed President Joe Biden, a Democrat.

Mulvaney’s fans have voiced support for her White House video, which has been viewed 9.7 million times, but critics including Cole, Caitlyn Jenner and many others eschew her showy gender change and Biden for boosting her profile.

‘It’s a little insulting that he calls himself a girl and not a woman,’ Cole said in an interview with Turning Point USA’s Frontlines.

‘He’s trying to emulate the look and personality of a teenage girl, which is an experience he’ll never know, because he’s biologically male. He will never understand what it means to grow up as a woman. It’s very disturbing.’

The Biden administration should have given the limelight to a ‘real trans kid’ rather than Mulvaney, Cole said.

Cole, who transitioned to male at 13 before regretting the move at 16 and seeking a reversal, also warned of social media’s big-name influencers impacting vulnerable youths who may themselves be questioning their identity.

‘Social media was one of the — if not the — biggest catalyst in me transitioning,’ said Cole, who recently founded the Detrans United campaign and support group.

‘If I wasn’t exposed to the content that I was exposed to so young, then it just wouldn’t have happened.’

Cole describes feeling like an unattractive ‘tomboy’ with negative feelings about femininity. She gravitated towards trans social media users and was soon being ‘force-fed that kind of content by the algorithm on Instagram,’ she added.

‘All these pieces clicked together … I had this idea that ‘maybe I’m not actually a girl, maybe I’m a boy’. It made sense to me at the time.’

Years into her detransition, Cole says she now suffers side effects from her double mastectomy and has to wear bandages as her body rejects the skin grafts. She doubts she can have children or breastfeed, she says.

Mulvaney met Biden as part of a panel of six progressive activists for NowThis News. In the interview, which aired on Sunday, he vowed to protect ‘gender-affirming care,’ saying states should not limit access to transgender treatments.

The 25-year-old has gained a massive following on TikTok by documenting her transition to a transgender female — originally identifying as ‘nonbinary’ but telling followers in March that she was a girl.

She first joined TikTok in 2020 after a stint playing Elder White in the Book of Mormon on Broadway. The influencer plans to get gender reassignment surgery on her face in December.

Still, her showy video posts on becoming a ‘girl’ on a youth-centric social media platform raise concerns, particularly when she uses such phrases as ‘Barbie pouch’ to describe vaginas.

Her critics include Jenner, 72, a right-wing celebrity and former athlete, who came out as transgender in 2015 and underwent sex reassignment surgery in 2017, who slammed the White House appearance.

‘Let’s not ‘normalize’ any of what this person is doing,’ Jenner posted on social media.

‘Young people look up to celebrities and politicians, and if they only hear one side, with no cultural counterweight, they’re hearing that transitioning is somehow consequence free and risk-free,’ said Jackson.

‘That’s ignoring the growing cohort of de-transitioners who come to regret their procedures.’

Are social media influencers behind the rise in teenage transitioners? Yes No

For those experiencing gender dysphoria, transitioning with drugs and surgery can be life-saving. Yet some experts warn against providing irreversible treatments to adolescents, pointing to growing numbers who come to regret procedures and seek to de-transition.

377: The British colonial law that left an anti-LGBTQ legacy in Asia

Whether to allow young people to take puberty-blockers, hormones or undergo surgery has become a hot-button issue in America’s culture wars, and Republican officials in Arkansas, Alabama, and Texas have sought to limit access to procedures.

Statistics on this issue are contested, but there does appear to be a rise in the number of young people seeking to transition, and studies suggest that online social media and peer groups play a role in the uptick.

Researchers from Vanderbilt University, in Nashville, Tennessee, this month found that the number of chest reconstruction surgeries being performed on trans children shot up nearly five-fold between 2016 and 2019, when it reached 489.

A report by the University of California, Los Angeles (UCLA), published this year found that 300,000 US children aged between 13 and 17 identified as transgender in 2020 — doubling in number from 2017.

Experts are divided over the rise and its likely causes. Many link it to growing understanding and acceptance of gender dysphoria, others liken it to a ‘contagion’ or fad driven by peers and social media.

‘Adolescents may come to believe that transition is the only solution to their individual situations, that exposure to internet content that is uncritically positive about transition may intensify these beliefs,’ says Littman’s study.

Worried moms and dads describe their kids ‘binge-watching’ videos on YouTube and other platforms that drive an ‘urgency to transition’ and instruct minors ‘how to deceive parents, doctors, and therapists to obtain hormones quickly’, says the study.

But the picture is different in Europe. Britain’s National Health Service this week unveiled plans to restrict puberty blockers and other treatments for children, saying they are often only going through a ‘transient phase’. Sweden and Finland have made similar moves.

Julia Mason, an Oregon-based pediatrician and an advisor for the Society for Evidence-based Gender Medicine, said Biden’s meeting with an advocate of transitioning was sending the wrong message to young people.

‘I look forward to President Biden meeting a de-transitioner to get some alternative views of this topic,’ said Mason.

‘It’s disappointing that the Biden team chose to elevate the status of this TikToker … social media is toxic to young people, especially young women. It presents them with unrealistic ideas about womanhood and drives anxiety and depression.’