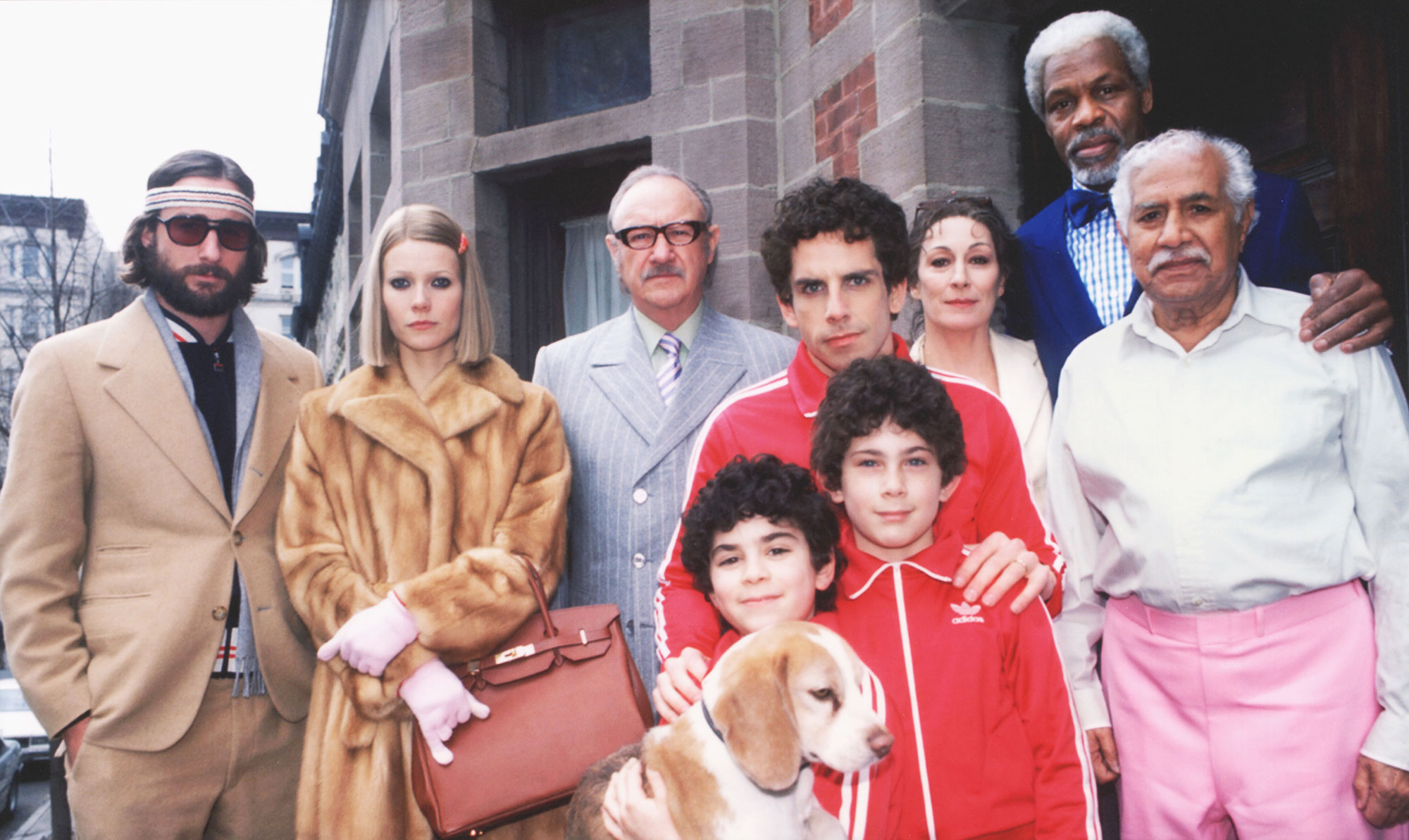 ‘The Royal Tenenbaums’ Cast: Where Are They Now? Gwyneth Paltrow, Ben Stiller, Owen Wilson and More

A reunion of the cast of The Royal Tenenbaums might be the only family gathering worth attending.

While the story may sound sweet, it’s later revealed that Royal’s homecoming is built on a lie. He tells his kids, now all grown up and each stuck in their own funks, that he’s dying of a terminal illness, hoping he can gain sympathy from them and their mother, his ex-wife Ethel Tenenbaum (Anjelica Huston). Despite Royal’s deceitful reason for his return, the family manages to find a way to reconcile their pasts and move toward a brighter future.

The stylish dramedy, which also starred Owen Wilson, Danny Glover and Bill Murray, was inspired by J.D. Salinger’s short stories and Orson Welles’ 1942 film, The Magnificent Ambersons — but the vision is all Anderson’s.

From the millennial pink accents to the Halloween-worthy costumes, the charm of The Royal Tenenbaums is in the details — and in its casting.

Anderson wrote the role of the once absent Tenenbaum patriarch specifically for Hackman — but the acting legend was hesitant to take the part. “It was written for him against his wishes,” the Grand Budapest Hotel director joked in a 2013 interview with Vulture. “He was difficult to get.”

The two-time Oscar winner was used to making more money than what was allotted for his role in the ensemble indie, Anderson confessed during a 20th anniversary panel at the Tribeca Film Festival in October 2021. However, Hackman was eventually swayed.

“I think maybe when he finally settled on the fact that he was really going to have to do the movie, he had to make it worth his while somehow,” the French Dispatch director continued. “[Hackman] gave us a lot. For that small amount of money, I feel like he gave us everything he had.”

Looking back on the film 20 years later, Luke agreed with Anderson. The Legally Blonde star found Hackman, who retired from acting seven years after appearing in The Royal Tenenbaums, to be a formidable scene partner — but he was even more terrifying off screen.

“He had a great thing that he did [when] he was on set all day,” the Old School actor recalled in October 2021 of the novelist’s acting process. “He just sat in his chair between shots. So even if another scene was going on, or if he wasn’t in it, he was always right there, which was also intimidating.”

The biggest compliment for Anderson’s follow-up to 1998’s Rushmore came courtesy of Paltrow, who admitted that there’s one scene in the film that always gets to her: the moment when Margot, in her fur coat and kohl-rimmed eyes, steps off the bus to meet Richie and Nico’s “These Days” begins to play.

The day she filmed that scene, her father, producer Bruce Paltrow, was on set, which only added to her admiration of the onscreen moment. (Bruce died in 2002 due to  complications of oral cancer and pneumonia.)

“My dad was there, and it was this very special day,” the Iron Man actress said during the Tribeca Film Festival panel. “I really hate, hate seeing myself in a movie ever. That’s kind of, like, the only scene that I can watch of myself, like, of my whole career.”

Keep scrolling to find out where the cast of The Royal Tenenbaums is now:

After playing Margot Tenenbaum, she starred in Shallow Hal, View From the Top, Sylvia, Country Strong and Contagion. She also played Pepper Potts in the Marvel Cinematic Universe appearing in the Iron Man trilogy, Spider-Man: Homecoming and Avengers: Endgame. She played recurring  Holly Holliday on Glee before founding the wellness and lifestyle brand Goop in 2008.

Gwyneth married producer Brad Falchuk in 2018 after four years of dating. She shares kids Apple and Moses with her ex-husband, Coldplay singer Chris Martin, whom she was with from 2003 to 2016.

The same year Luke played Richie Tenenbaum, he also starred alongside Reese Witherspoon in Legally Blonde. He would go on to star in Old School, Legally Blonde 2: Red, White and Blonde, The Family Stone, Idiocracy and Zombieland: Double Tap. He has also appeared on That ‘70s Show, HBO’s Enlightened, Showtime’s Roadies and Stargirl on Disney+. In 2020, he was the host of the ABC series Emergency Call.

He has been romantically linked to Drew Barrymore, former basketball player Meg Simpson and his Royal Tenenbaums costar Gwyneth.

The same year he played Chas, Stiller also wrote, directed and starred in Zoolander with Owen, who became a frequent collaborator. He earned recognition with comedies such as Dodgeball: A True Underdog Story, Meet the Fockers, Tropic Thunder and the Night at the Museum trilogy. Along with voicing the character of Alex in the Madagascar films, Stiller directed and starred in the Showtime limited series Escape at Dannemora in 2018.

Stiller married Christine Taylor in 2000, but after 17 years of marriage, the pair announced their separation in May 2017. The estranged couple share daughter Ella and son Quinlin.

Owen, who played Eli Cash, became one of the biggest stars in Hollywood thanks to a string of comedies that had him teaming up with his Royal Tenenbaums costar Stiller, including Zoolander, Starsky & Hutch, Meet the Fockers and the Night at the Museum films. He also starred in Wedding Crashers, Marley & Me and Midnight in Paris. The Texas native voiced Lightning McQueen in Pixar’s Cars franchise.

He reunited with Anderson on the Life Aquatic With Steve Zissou, The Darjeeling Limited, Fantastic Mr. Fox, The Grand Budapest Hotel and 2021’s The French Dispatch. That same year, he starred alongside Tom Hiddleston in Marvel’s Loki TV show.

After playing the patriarch in The Royal Tenenbaums, the iconic actor only appeared in two more movies: 2003’s Runaway Jury and 2004’s Welcome to Mooseport. In 2008, the French Connection actor confirmed that he was leaving acting. He briefly came out of his retirement to narrate two TV documentaries: 2016’s The Unknown Flag Raiser of Iwo Jima and 2017’s We, The Marines. The Enemy of the State actor has written five novels, including 2001’s Payback at Morning Peak and 2013’s Pursuit.

Hackman married Betsy Arakawa in 1991. He shares three kids — Christopher, Elizabeth and Leslie — with first wife Fay Maltese, whom he was married to from 1956 to 1986.

Huston went on to work with Anderson again on three movies after playing Ethel Tenenbaum: The Life Aquatic With Steve Zissou, The Darjeeling Limited and The French Dispatch. She also starred alongside Keanu Reeves in 2019’s John Wick: Chapter 3 — Parabellum after appearing on the short-lived NBC musical series Smash from 2012 to 2013. She released her first memoir, A Story Lately Told: Coming of Age in Ireland, London, and New York, in 2013. One year later, the Oscar winner released its follow-up, Watch Me.

Huston was married to sculptor Robert Graham from 1992 until his death in 2008.

Murray, who played Raleigh St. Clair, is a frequent collaborator of Anderson’s, appearing in nine of the director’s 10 films, including Rushmore, The Life Aquatic With Steve Zissou and The French Dispatch. The comedy icon previously worked with Sofia Coppola on 2003’s Lost In Translation, which earned him his first and only Oscar nomination, and 2020’s On the Rocks. He reprised his Ghostbusters role of Dr. Peter Venkman in 2021’s Ghostbusters: Afterlife.

The Chicago native was married to Jennifer Butler from 1997 to 2008. The pair are the parents of four sons: Cal, Jackson, Cooper and Lincoln. He also shares two sons, Luke and Homer, with first wife Margaret Kelly, whom he was with from 1981 to 1996.

After playing Ethel’s beau, accountant Henry Sherman, Glover went on to star in Saw, Saw III, Dreamgirls, Be Kind Rewind, Sorry to Bother You, Jumanji: The Next Level and The Dead Don’t Die, which also starred Murray. He had a recurring role on ER in 2005 and on Brothers & Sisters in 2007.

Glover married Eliane Cavalleiro in 2009. He shares a daughter, Mandisa, with ex-wife Asake Bomani, from whom he split in 2000 after 25 years.

Baldwin was the narrator of Anderson’s film. He played Jack Donaghy on 30 Rock from 2006 to 2013. He later played Donald Trump on Saturday Night Live from 2016 to 2020. He released his memoir, Nevertheless, in 2017, and has hosted the “Here’s the Thing” podcast since 2011. The Beetlejuice actor starred in the miniseries Dr. Death in 2021. That same year, Baldwin was involved in an incident on the set of the indie film Rust as a prop gun misfired, killing cinematographer Halyna Hutchins. No charges were filed at the time, but police opened an investigation.

The Boss Baby star married Hilaria Baldwin (née Thomas) in 2012. They have six children: Carmen, Leonardo, Eduardo, Romeo, Rafael and Lucia. He also shares a daughter, Ireland, with ex-wife Kim Basinger, to whom he was married from 1993 to 2002.

Since playing Chas’ son Ari, Rosenmeyer has appeared in films such as 2016’s Money Monster and 2021’s Shook. He wrote and directed the 2008 film Fugue after starring on the short-lived TV series Oliver Beene from 2003 to 2004. The New Yorker later appeared on four episodes of Crazy Ex-Girlfriend between 2015 and 2019.

Meyerson made his acting debut as Chas’ son Uzi and went on to appear in House of D, Little Manhattan and Griffin & Phoenix. His last acting credit was a three-episode stint on The Book of Daniel in 2006. Since 2018, he has worked as an associate producer for The Late Show With Stephen Colbert.

Turturro, whose dad is actor John Turturro, played the young Richie Tenenbaum in the 2001 film. They have only appeared in two other movies since: 2004’s 2BPerfectlyHonest and the following year’s Romance & Cigarettes, which also starred Murray. After graduating from New York’s School of Visual Arts in 2012, they worked as an associate editor at DC Comics.

Aslanian-Persico’s first and only film role was playing young Chas in The Royal Tenenbaums. He has worked for the NYC Department of Education since July 2018.

Gorovaia made her film debut playing young Margot Tenenbaum. She appeared in 2003’s Runs in the Family and in 2004’s The Butterfly Effect with Ashton Kutcher, going on to train with the School of the American Ballet and study drama at LaGuardia Arts High School in New York City. In 2000, she performed in The Nutcracker with the New York City Ballet. In 2019, Gorovaia starred in and produced the short film A Magnificent Gray. She directed her first short film, Tapochki, in 2021.

Previous
Kim Kardashian Passes The Bar Exam – And Flexes A Look, Of Course