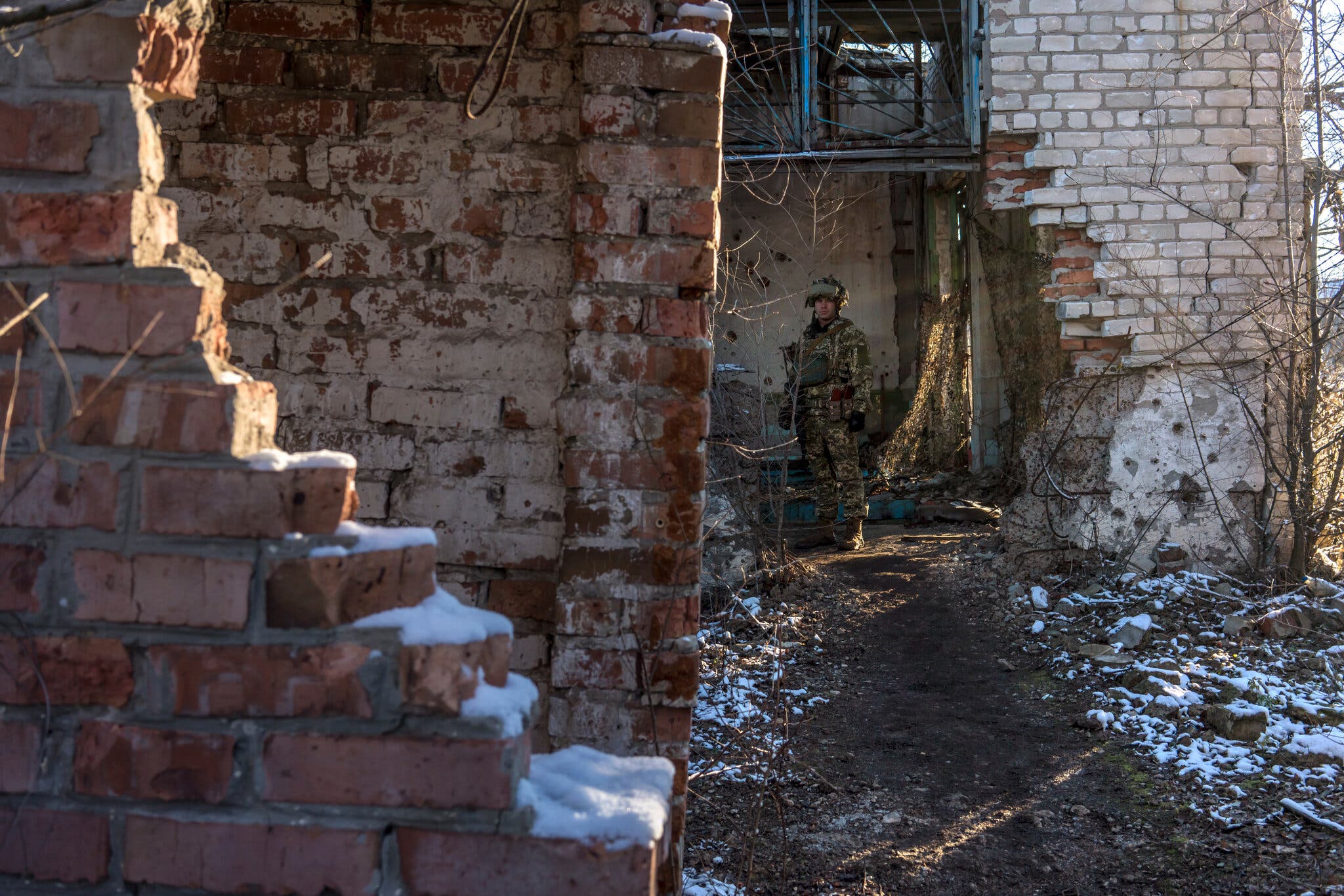 The Roots of the Ukraine War: How the Crisis Developed

Share
Home
News
The Roots of the Ukraine War: How the Crisis Developed

It felt like a scene from the Cold War, a perilous episode from a bygone era. An unpredictable Russian leader was amassing troops and tanks on a neighbor’s border. There was fear of a bloody East-West conflagration.

Then the cold war turned hot: Vladimir Putin ordered Russian forces to invade Ukraine. The repercussions were immediate, and far-reaching.

In the days ahead of the invasion, even as Russian forces reached an estimated strength of 190,000, and even as the United States warned in increasingly dire tones that a military strike appeared inevitable, Mr. Putin was claiming that he was open to diplomacy, and European leaders were working desperately to persuade the Kremlin to stand down.

Then on Feb. 24, the Russian president, addressing his nation, declared the start of a “special military operation” in Ukraine.

Now, the largest mobilization of forces Europe has seen since 1945 is underway, with Ukrainian soldiers and civilian resistance fighters battling to fend off a Russian assault on multiple fronts.

On Monday, talks began between Russian and Ukrainian delegations in Belarus, a close ally of Moscow’s, but more movement took place on the battlefield than at the negotiating table.

A 17-mile-long Russian convoy was reported making its way toward the capital, Kyiv. And in a chilling escalation, a barrage of Russian rockets hit a residential neighborhood in Ukraine’s second-largest city, Kharkiv, where at least nine civilians were killed and dozens injured.

Outside observers speculated that Mr. Putin, frustrated by the surprisingly slow advance of his forces — which greatly outmatch Ukraine’s but have faced stiff resistance from Ukrainian soldiers and civilians alike — may have grown impatient and decided to tighten the screws. That could signal more civilian casualties ahead, they said.

The number of refugees who have fled the country has topped half a million. And Mr. Putin appears intent on capturing the Ukrainian capital, Kyiv, toppling Ukraine’s democratically elected government, and subsuming the country into Russia’s orbit.

The invasion threatens to destabilize the already volatile post-Soviet region, with serious consequences for the security structure that has governed Europe since the 1990s.Mr. Putin has long lamented the loss of Ukraine and other republics when the Soviet Union broke apart. Now, diminishing NATO, the military alliance that helped keep the Soviets in check, may be his real mission. Before invading, Russia made a list of far-reaching demands to reshape that structure — positions NATO and the United States rejected.

Here is a look at how the world got here.

What’s behind the Ukraine crisis?

After the Soviet Union collapsed, NATO expanded eastward, eventually taking in most of the European nations that had been in the Communist sphere. The Baltic republics of Lithuania, Latvia and Estonia, once parts of the Soviet Union, joined NATO, as did Poland, Romania and others.

As a result, NATO moved hundreds of miles closer to Moscow, directly bordering Russia. And in 2008, it stated that it planned — some day — to enroll Ukraine, though that is still seen as a far-off prospect.

Mr. Putin has described the Soviet disintegration as a catastrophe that robbed Russia of its rightful place among the world’s great powers and put it at the mercy of a predatory West. He has spent his 22 years in power rebuilding Russia’s military and reasserting its geopolitical clout.

The Russian president calls NATO’s expansion menacing, and the prospect of Ukraine joining it a major threat to his country. As Russia has grown more assertive and stronger militarily, his complaints about NATO have grown more strident. He has repeatedly invoked the specter of American ballistic missiles and combat forces in Ukraine, though U.S., Ukrainian and NATO officials insist there are none.

Mr. Putin has also insisted that Ukraine and Belarus are fundamentally parts of Russia, culturally and historically. He holds considerable sway over Belarus, and talks about some form of reunification with Russia have gone on for years.

But East-West relations worsened drastically in early 2014, when mass protests in Ukraine forced out a president closely allied with Mr. Putin. Russia swiftly invaded and annexed Crimea, part of Ukraine. Moscow also fomented a separatist rebellion that took control of part of the Donbas region of Ukraine, in a war that still grinds on, having killed more than 13,000 people.

What does Putin want?

Mr. Putin appears intent on winding back the clock more than 30 years, establishing a broad, Russian-dominated security zone resembling the power Moscow wielded in Soviet days. Now 69 years old and possibly edging toward the twilight of his political career, he clearly wants to draw Ukraine, a nation of 44 million people, back into Russia’s sphere of influence.

Russia presented NATO and the United States in December with a set of written demands that it said were needed to ensure its security. Foremost among them are a guarantee that Ukraine would never join NATO, that NATO draw down its forces in the Eastern European countries that have already joined, and that the 2015 cease-fire in Ukraine be implemented — though Moscow and Kyiv disagree sharply on what that would mean.

The West dismissed the main demands out of hand, while making overtures on other concerns, and threatening sanctions. Moscow’s aggressive posture has also inflamed Ukrainian nationalism, with citizen militias preparing for a drawn-out guerrilla campaign in the event of a Russian occupation.

Mr. Putin’s timing could also be related to the transition from President Donald J. Trump, who was notably friendly to him and disparaging of NATO, to President Biden, who is committed to the alliance and distrustful of the Kremlin.

He may also want to energize nationalists at home by focusing on an external threat, as he has in the past. Mr. Putin has crushed domestic challenges to his authority, but last year, with the economy stumbling and the pandemic raging, opposition groups held some of the largest anti-Putin protests in years. Since the invasion began, thousands of Russians, some at great personal risk, have taken to the streets to protest the war.

How is the United States responding?

In early December, President Biden made clear that his administration was not considering sending troops to fight for Ukraine since, among other reasons, Ukraine is not a member of the NATO alliance and does not come under its commitment to collective defense.

Records of gay military sackings deleted by Ministry of Defence

Instead, the United States has sent anti-tank and antiaircraft weapons to Ukraine, increased the American military presence in NATO countries that border Russia, and ordered an additional 7,000 troops to Europe. The Pentagon also ordered the deployment of an armored brigade combat team to Germany to reassure skittish NATO allies in Eastern Europe. Administration officials also warned that the United States could throw its weight behind an Ukrainian insurgency.

But the real cudgel is financial.

Before the invasion, Mr. Biden threatened Mr. Putin with “economic consequences like none he’s ever seen.” Afterward, he began to put them in place. Mr. Biden, vowing to turn Mr. Putin into a “pariah,” has announced tough new sanctions aimed at cutting off Russia’s largest banks and some oligarchs, from much of the global financial system and preventing the country from importing American technology critical to its defense, aerospace and maritime industries. The administration has also issued sanctions against the company behind an energy pipeline connecting Russia to Germany.

Mr. Biden has also said the United States was freezing trillions of dollars in Russian assets, including the funds controlled by Russian elites and their families, making them pay for what the American president called “a premeditated attack” against a free nation in Europe.

Western governments have also vowed to freeze assets belonging to Mr. Putin, but very little is known about what he owns and where it might be.

The Biden administration could also institute sanctions that could deprive Russians of their beloved next-generation phones, laptops and other gadgets.

What’s at stake for Europe?

At stake for Europe is the security structure that has helped keep the peace on the continent since World War II. Europeans were initially divided over how to respond to various forms of Russian aggression, and the conflict laid bare the fractures within the European Union and NATO. But outrage over Mr. Putin’s aggression has helped foster a unified front, and the E.U. unveiled penalties that hey described as unprecedented for the bloc in terms of scale and reach.

Europe has important trade ties with Russia, and stands to lose far more than the United States from sanctions. It is also dependent on Russian gas supplies, a weakness that Mr. Putin has exploited in past disputes.

Europe lost an invaluable negotiator with Moscow after the departure of Chancellor Angela Merkel, who grew up in the east, speaks fluent Russia, and had developed a good working relationship with the Russian president. Her successor Olaf Scholz, has tried to take on a leadership role in the crisis that escalated soon after his election, halting certification of the Nord Stream 2 natural gas pipeline that would link his country with Russia — one of the strongest moves yet by the West to punish the Kremlin. Previous
I Suck at Makeup, But These Eye Stickers Make Creating Euphoria Looks So Easy