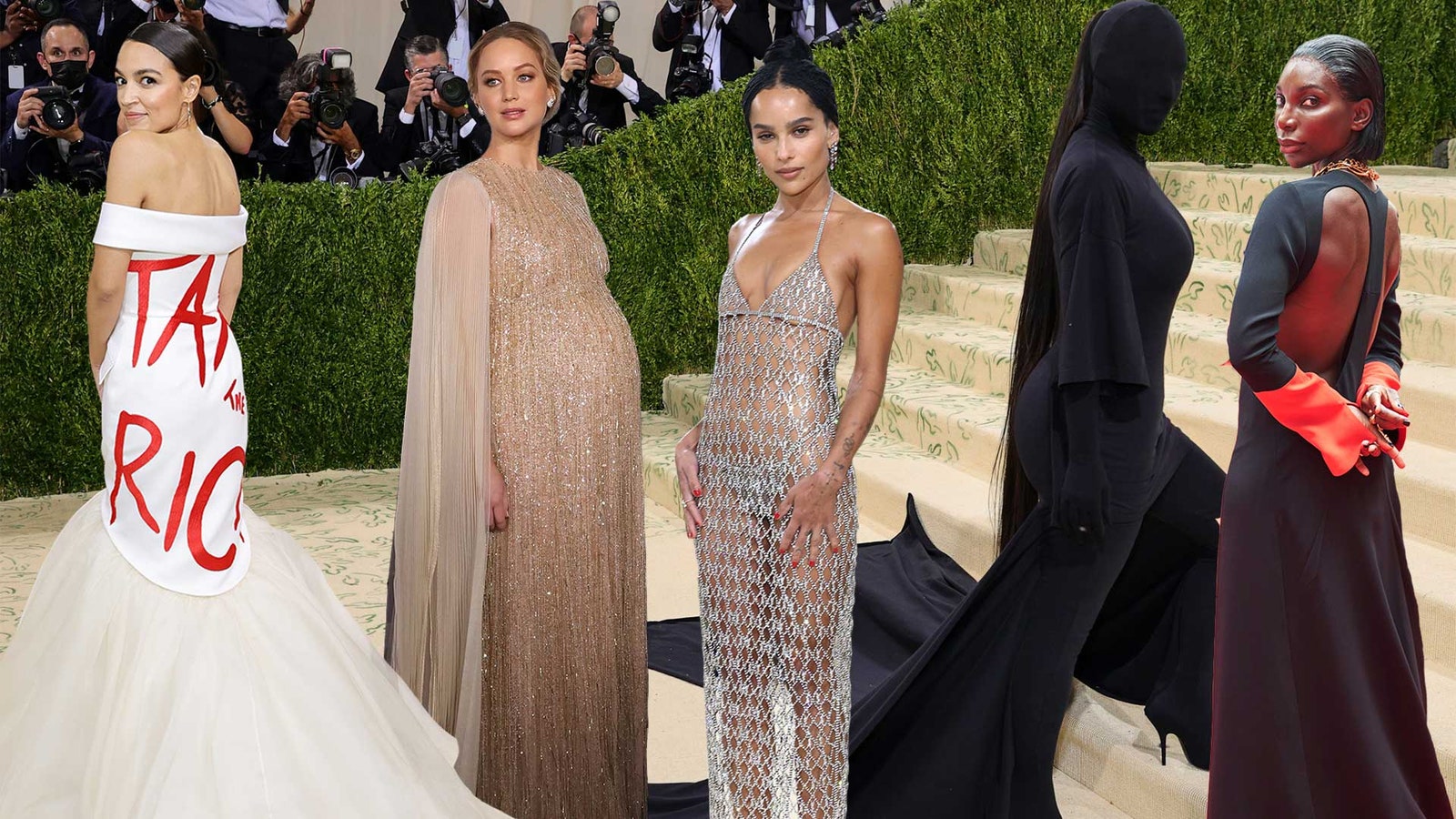 Exquisiteness abounded on the red carpet in 2021, with stars making up for lost time in front of the cameras. These were not your ordinary princess dresses, but tumbling frothy confections that paid homage to Hollywood icons of yore, statuesque gowns delivering political statements, and bulletproof looks that made their own kind of history. Here, the 15 dresses that defined the year.

Erivo gave the semi-digitised awards season the finger by wearing retina-searing Valentino couture to the Golden Globes. The sculptural Stabilo highlighter-green gown spelled out the fact nothing would ruin her red-carpet fun this year, with her monster platforms adding to the kick-ass effect. The message? Do not mess with this die-hard fashion fan.

Coel swept the TV BAFTAs in an original look by London’s rising star, Maximilian Davis. The statuesque dress featuring a dramatic back strip, which was inspired by the Trinidad highways the designer’s taxi driver parents motored along during his childhood, was one of the first pieces Davis made in his bedroom before he applied for Fashion East. It was also the first time Coel had allowed a designer to make her a custom dress, usually preferring pieces she or her mother had made. It was a momentous occasion for all involved.

AOC made a splash during her first Met Gala appearance, wearing a white Brother Vellies gown emblazoned with the political message: “Tax the rich.” The look went viral as the Democratic-Socialist congresswoman hammered home her belief that, “The time is now for childcare, healthcare, and climate action for all.” A truly excellent example of using fashion as a platform for change.

Ushering US President 45 out and 46 in wearing a bulletproof Schiaparelli gown was one of the proudest days of Lady Gaga’s life. “I don’t know if people know this about me, but if I weren’t who I am today, I would have been a combat journalist,” she told British Vogue of her momentous date at the Capitol. The gilded dove of peace brooch Gaga chose to adorn her bespoke look spoke a thousand words about what this inauguration meant to the American nation watching.

Viola Davis in Lavie by CK

“Viola wanted a designer who spoke to her specifically as a Black woman,” Davis’s stylist Elizabeth Stewart told British Vogue of the actor’s Golden Globes look: a Lavie by CK dress celebrating the transportive quality of Cameroon’s prints. “It’s all about rethinking glamour and couture on the red carpet in the age of diversity and inclusivity.” The gown was specifically inspired by African royalty and, as Stewart said, Davis is Hollywood royalty.

The French cinema favourite delivered a certain je ne sais quoi at Cannes, by showing that she can pull off Balenciaga’s subversive second-skin dresses and knife boots with the same level of sass as Demna Gvasalia’s loyal disciples (read: Kim Kardashian and Rihanna). From the paparazzi-shielding sunglasses to the crystal cuffs, Huppert was everything great red-carpet fashion should be: a talking point.

J-Law got a new stylist this year and she wore the dress to prove it. For her spectacular red-carpet comeback, Kate Young – the woman also behind the wardrobes of Sienna Miller and Dakota Johnson – commissioned Dior to create the expectant mother a glittering gown that looked the very definition of radiant.

The most memed dress of the year goes to Kim Kardashian West and her all-in-one Balenciaga Met Gala look, designed by Kanye West in collaboration with Demna Gvasalia. We’re still reeling from the hype – and so are the Halloweeners who morphed up in homage to one of the world’s most famous women.

“It’s pretty bold and very sparkly” is how Kravitz summed up her Met Gala look prior to the event. Even this forewarning could not prepare us for the jaw-dropping effect of her crystal sheath, crafted from teeny-tiny YSL diamantés and revealing a pair of microscopic bejewelled knickers underneath. Come to think of it, we’re still not over it.

Yes, it’s not technically a dress, but Chan’s Swarovski speckled two-piece deserves a shout out. Fashioned by rising South Korean-born couturier Sohee Park, the Eternals premiere look honoured Chan’s mission to give Asian designers a seat at the table.

Eternal Versace girl Angelina Jolie sent social media into meltdown with her platinum silver column gown that delivered superhero chic on the Marvel press tour. The kicker? It was crafted from heritage metal mesh, in line with the actor’s new conscious approach to red-carpet wear, demonstrating that newness is not always necessary when it comes to making Hollywood fashion history.

Zendaya, who only stopped by the Oscars to present an award, stole the crown for the undisputed “wow” moment on the red carpet thanks to her sunshine Valentino gown, which billowed in the wind along with her mermaid hair. Almost every dress from the newly crowned fashion icon has been worth noting this year, from her vintage YSL gown once belonging to Eunice W Johnson to her homage to Beyoncé in Versace, but this effortlessly exquisite wisp of an Oscars gown trumped the lot.

After Eilish’s transformative British Vogue cover shoot, which paid homage to the hyper-femininity of Old Hollywood sirens, the popstar nodded to America’s most famous pin-up: Marilyn Monroe. “She had always dreamed of wearing a proper ballgown – particularly something corseted, thanks to her love of Barbies growing up,” says British Vogue’s style director Dena Giannini, who dressed Billie for her big moment. Completing the fairytale blush tulle Oscar de la Renta dress were no less than 30 pieces of Cartier jewellery, including 25 rings – the most ever worn by a starlet on the red carpet.

Rihanna was always going to shut down the Met Gala red carpet, but the fashion chameleon delivered a look unlike anything we have seen from her before. Her custom enrobing Balenciaga gown, with its matching jaunty headpiece and jewels to drool over, was also different to the other Balenciagas at the ball. Proof Rih always goes her own way.

Mulligan is a quiet but commanding presence on the red carpet. For her short and sweet public appearances this year, she teamed up with Valentino’s Pierpaolo Piccioli and veered straight into gargantuan ballgown territory. It was the off-kilter capelet that did it for us on this bubblegum-pink confection at the Met Gala. The mood? “Revenge Barbie”. The verdict? Pure heaven. Next
Anya Taylor-Joy Isn’t Resting on Her Laurels