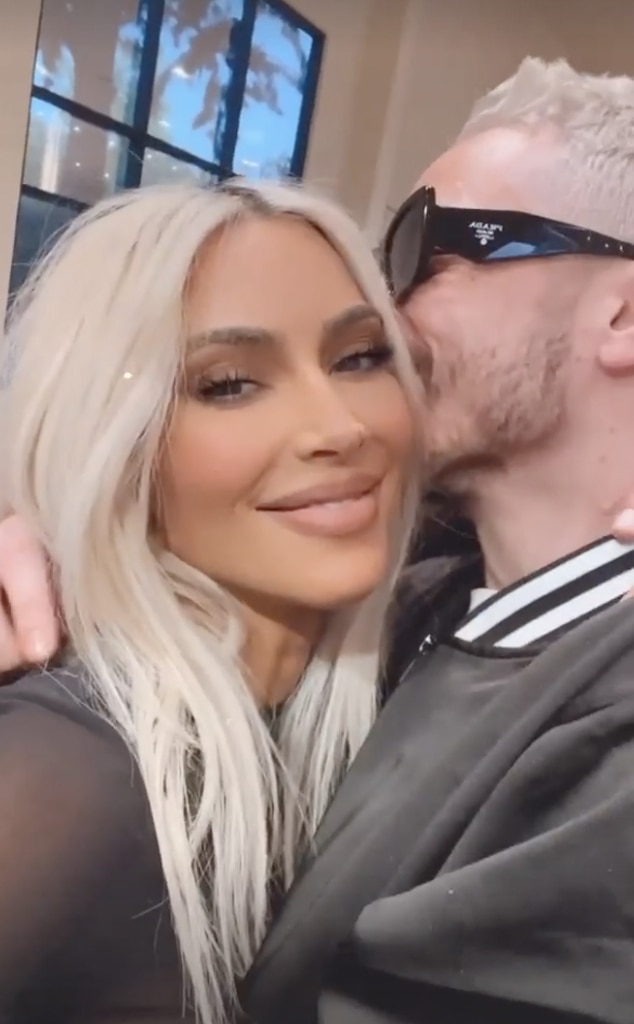 Kim Kardashian and Pete Davidson are proving that blondes do have more fun.

On May 29, the SKIMS CEO shared PDA-filled Instagram videos of herself and her boyfriend—who she began dating last fall—rocking matching platinum blonde ‘dos. In one clip, the Saturday Night Live alum shared a kiss with his girlfriend as she looked into the camera. In another, Pete, 28, stuck out his tongue while having his arm around Kim, 41, as she shared a kissy face.

Two days prior, Pete debuted his new platinum blonde tresses while appearing to be at a photoshoot with Kim, her hairstylist, Chris Appleton, and makeup artist, Mario Dedivanovic. The King of Staten Island actorwas photographed outside an office in Calabasas while wearing a shower cap covering newly dyed hair. The Kardashians star was also photographed with him, wearing a nude SKIMS crop top and matching leggings.

Kim’s post comes days after she and her 8-year-old daughter North West—who she shares with ex-husband Kanye West—traveled to Italy to attend Kourtney Kardashian and Travis Barker‘s wedding ceremony.

Though Pete couldn’t make it as Kim’s date to the lavish nuptials due to him making his final appearance on Saturday Night Live on May 21, she found a subtle way to keep the comedian close to her by getting the letter “P” written in crystals on her hot pink nails.

However, Kim was far from lonely at her sister’s wedding, as the rest of her family members, including mom Kris Jenner and sisters Khloe Kardashian, Kendall Jenner, and Kylie Jenner, were also in attendance.

Following the nuptials, the KKW Beauty founder shared a photo of Kourtney caressing North’s face as she walked down the aisle. Kim captioned the May 27 post, “KRAVIS FOREVER.”

Celebrity news: Kim’s 1st Husband Just Responded to Claims She Was on Drugs When They Got Married

Next
For Victoria’s Secret model Emira D’Spain, trans visibility and joy are synonymous