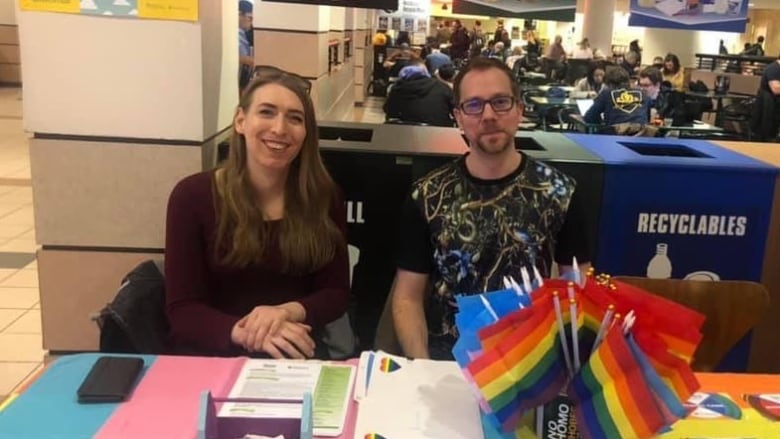 It wasn’t easy growing up transgender in a small Alberta hamlet, but Alex Marshall has a genuine fondness for her hometown — and she wants to help other rural LGBT youth get that same feeling.

Marshall grew up in Joffre, Alta., a hamlet of about 170 people, 145 kilometres south of Edmonton.

“I think it’s such a cool, cute little community,” Marshall said. “And I just hate that, growing up, I knew it wasn’t a space for me.”

Now the rural education co-ordinator for fYrefly in Schools, Marshall works with students, educators and community members to reduce discrimination against LGBT youth.

Through the program, she’s spoken to more than 2,000 people since January.

The program, run through the University of Alberta’s Institute for Sexual Minority Studies and Services, looks at understanding LGBT identities and teaching others to become better allies, according to its website.

FYrefly started about a decade ago but didn’t explicitly include rural schools until 2020.

Marshall said it’s important to include them because of the lack of infrastructure supporting rural LGBT youth.

In bigger cities, youth have access to specific-LGBT events or spaces like the Pride Centre, but that isn’t always the case in rural areas.

“Sadly the messaging that they get is, when you’re 18 you can move to the big city and be safe and queer then,” Marshall said.

But through fYrefly, she hopes to change that.

Dixonville School in the hamlet of Dixonville, 500 kilometres northwest of Edmonton, had a visit from Marshall in February.

The kindergarten to Grade 9 school has fewer than 50 students.

Principal Britain Olischefski said his school community is accepting, but he was eager for students and teachers to learn how to become better allies to their LGBT peers.

“The concept of gender identity is changing and things are different than when I grew up,” Olischefski said. “There’s lots to understand especially when it comes to [terminology].”

Olischefski said the biggest impact of the fYrefly program was on a transgender student, who, he said, was beaming after the presentation.

Marshall said that while most school communities are eager to learn, she is sometimes called in because of incidents of homophobia, transphobia or even violence.

She uses those incidents to teach students and teachers to learn about LGBT identities and understand the effects of discrimination, she said.

Olischefski says the teachers and students at Dixonville learned a lot about empathy through the training.

“You may not identify as trans or queer, but you can still be a friend.”

Previous
Why Is No One Taking Sexual Assault In The Metaverse Seriously?

Next
Ukraine conflict: What is Nato and how has it responded to Russia’s invasion?