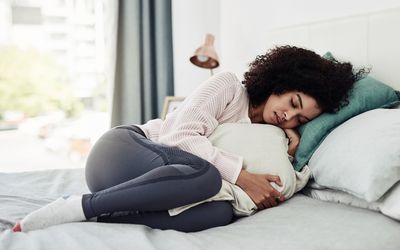 It’s common to feel a little more tired than usual when you’re about to start your period. In fact, more than 90 percent of women — most of them in their 30s — say that they experience premenstrual syndrome (PMS) symptoms, such as mood swings, tender breasts, and headache, according to the Office on Women’s Health. But for some menstruators, an impending visit from Aunt Flo can make them feel like they’re coming down with something along the lines of the flu.

Although the “period flu” isn’t an official medical diagnosis (and it’s not related to influenza, the virus), many menstruators experience an onslaught of malaise-type symptoms, including fatigue, body aches, and headaches around the middle of their cycle, says Taraneh Shirazian, M.D., board-certified ob-gyn at NYU Langone Health.

In other words, like traditional PMS, period flu tends to pop up after ovulation and before your period — the exact number of days prior to your flow, however, varies person to person. And period flu’s symptoms (many of which are the same as those of PMS) normally ease off a few days after your period starts, says Christine Greves, M.D., board-certified ob-gyn at Winnie Palmer Hospital for Women and Babies in Orlando, Florida.

So what’s the difference between PMS and period flu, exactly? Because it’s not well studied, it’s hard to say how, if at all, period flu really differs from PMS or even other period-related conditions such as premenstrual dysmorphic disorder (PMDD), says Dr. Greves. That said, both experts describe it as an exaggerated form (think: more intense, more flu-like) of PMS.

Ahead, everything you need to know about period flu, including causes, symptoms, and how to find relief from the monthly malaise

You probably guessed it: Your hormones are likely to blame for your overall crummy feelings.

While the exact cause of period flu is still TBD (remember: there’s not a lot of research on the topic), the most likely cause is the dramatic drop in hormone levels during the luteal phase of the menstrual cycle (aka the time between ovulation and your period), says Dr. Shirazian.

A little cycle science: During ovulation (typically around day 14 of your cycle), there’s a dramatic increase in luteinizing hormone (LH), which causes an ovary to release an egg. (Just before ovulation, levels of the hormone estrogen are also at their highest.) Then comes the luteal phase, when the egg travels through the fallopian tubes to the uterus. At this time, levels of the hormone progesterone increase to help prepare the uterine lining for pregnancy. If you don’t become pregnant (i.e. the egg is not fertilized), your estrogen, progesterone, and LH levels drop, and you start to shed the lining of your uterus as your period begins.

“This drop in the hormone LH and progesterone causes some women to feel a whole host of symptoms,” says Dr. Shirazian. “Some people describe these symptoms as diarrhea and nausea because there’s hypermobility of the bowels, lethargy, cramps, and lower back pain. I would call it overall malaise, which is how people generally feel around the flu, so it would make sense that people call it the ‘period flu.'”

Research also suggests that progesterone might affect neurotransmitters in the brain, including serotonin (which plays a role in mood and energy). So the thinking is that when progesterone fluctuates, so do the levels of serotonin, which can potentially lead to, for example, the increased feelings of fatigue and that come with period flu.

In addition to this shift in hormones, the increased levels of prostaglandins can result in some women experiencing these exaggerated PMS symptoms, notes Dr. Greves. ICYDK, prostaglandins are hormone-like substances in the body that trigger your uterine muscles to contract so the uterus sheds its lining during your period. High levels of prostaglandins are associated with more painful cramps, and can also cause abdominal cramps and diarrhea, according to the Mayo Clinic. Because they’re inflammatory compounds, prostaglandins can also increase inflammation in your body leading up to your period, which, in turn, can trigger those flu-like symptoms, adds Dr. Greves.

But after a few days of your period, prostaglandin levels decrease so your period flu pain (should) subside.

Period flu symptoms run the gamut of PMS ailments and include:

It’s important to note, though, that common period flu symptoms don’t include a fever, sore throat, and congestion — signs that indicate you might truly be suffering from a cold or the flu virus. So, if you’re experiencing any of these symptoms, that’s a red flag that it’s not just cranked-up PMS. “Upper-respiratory symptoms don’t usually go along with your period. If you have a cough, fever, chest pain, or difficulty breathing, then it’s far less likely to be the ‘period flu,'” says Dr. Shirazian.

How to Find Relief from Period Flu

Fortunately, you don’t have to live in agony when that time of the month rolls around. Here are some ways you can find relief for your symptoms.

“Birth control works because it stabilizes your hormones, so you don’t have that LH surge or drop in progesterone levels. Women who are on birth control don’t notice any major changes during their period. It keeps everything constant,” explains Dr. Shirazian. The best type of hormonal birth control — the pill, ring, patch, or intrauterine device (IUD) — for managing period flu depends on your symptoms. Ask your doctor to figure out the best choice for you.

The patch, pill, and ring work similarly because they’re systemic hormones, meaning they’re absorbed into the body and don’t go straight to your uterus, says Dr. Greves. But the hormonal IUD offers a more localized response in the uterus, so it may help with symptoms such as cramping and menstrual flow.

If you have diarrhea, it can lead to dehydration, so make sure you’re getting enough H2O throughout the day, says Dr. Greves. Drinking water, tea, or broth can help replace the loss of fluid and electrolytes, according to the Mayo Clinic. She also recommends eating plenty of inflammation-fighting foods, such as fruits and vegetables, to help fight the pain associated with the increased levels of prostaglandins.

Exercise provides the natural release of feel-good endorphins and helps with the inflammation caused by the prostaglandins, explains Dr. Greves. So lace up your sneakers and head out for a walk, do some yoga, or lift some heavy weights — whatever works for you. (FYI, here are 6 things to know about working out on your period.)

Taking a turmeric supplement, such as that from Garden of Life (Buy It, $36, walmart.com) — after first okay-ing it with you doctor, as supplements are not regulated by the FDA — or pain medication, such as non-steroidal anti-inflammatory drugs (NSAIDs) can help ease cramps and lower back pain, adds Dr. Shirazian.

Start taking the smallest dose (~200 mg) as possible of NSAIDs (e.g. Aleve, Motrin, Advil) regularly about two days before your period starts to help ease prostaglandin-causing pain symptoms, provided you don’t have any contraindications, recommends Dr. Greves. Be sure to take the medication with food to avoid a stomach ache and, worse, ulcers. Once your period starts, gauge your symptoms to see if you need to continue to take them. For example, you can take a tablet every six hours as needed. “Some warm compresses can also help with back pain,” she adds. (See also: Holistic PMS Treatments to Help You Get a Handle On Your Hormones)

When to See Your Doctor

Generally, the “period flu” isn’t something you should worry about too much, especially if you’re noticing a monthly pattern with your symptoms. The best way to approach it is to keep track of your symptoms by using a period tracking app or even a journal, and if any new ones pop up or if something feels off, reach out to your doctor.

“All of these symptoms can be [due to] lots of things. If we’re talking pelvic pain, nausea, and vomiting, then it can be ovarian cysts, pelvic inflammatory disease (PID), and even pregnancy, so it depends on the specific symptoms,” explains Dr. Shirazian. “But if your symptoms are alleviated with your period or if they are cyclic in nature, then it’s less concerning.”

However, if the “period flu” is affecting your quality of life (think: staying home from work, forcing you to miss out on social activities), there’s absolutely no reason to continue living with it. Speak to your doctor about possible preventive options such as hormonal birth control.