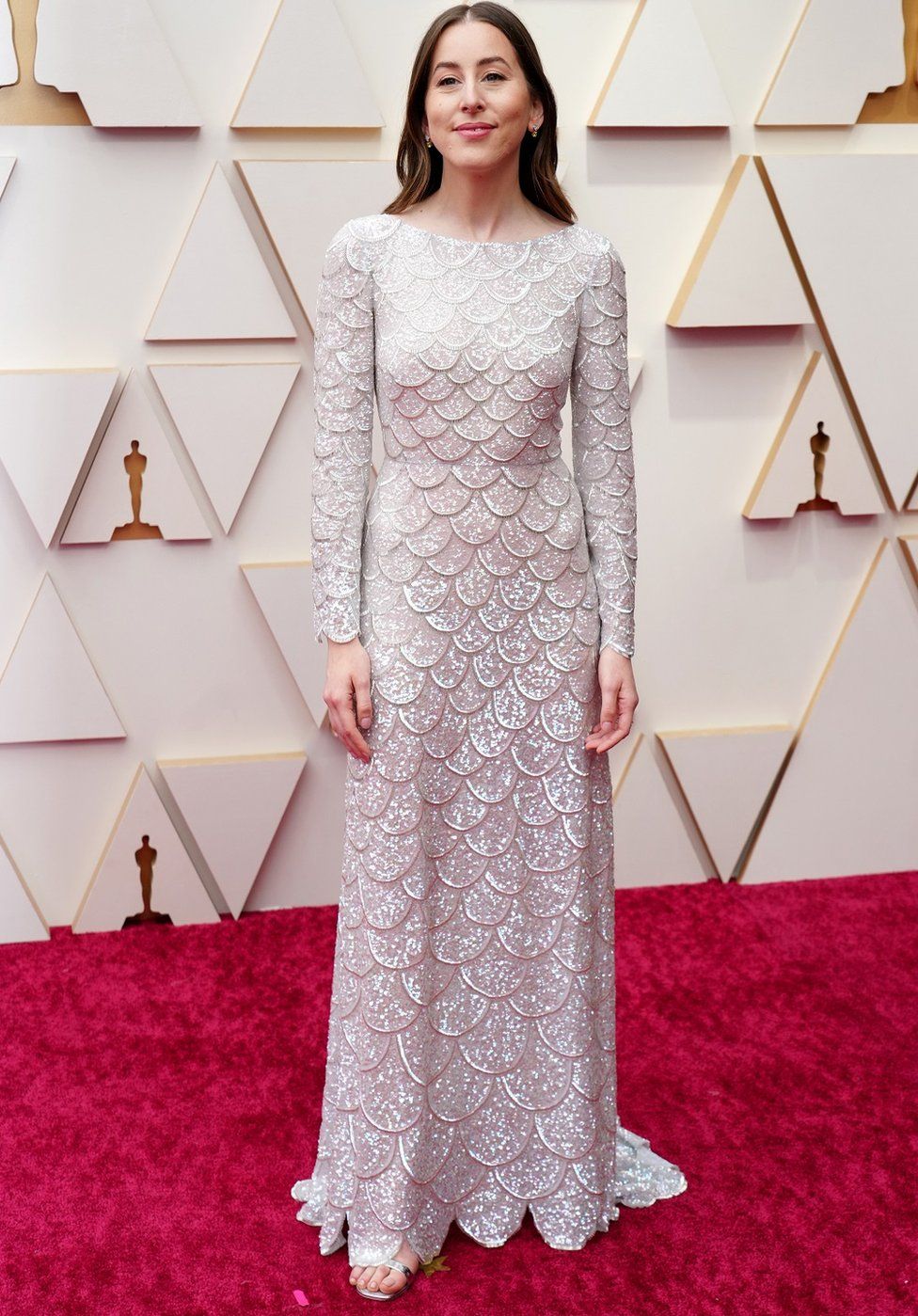 After last year’s Oscars red carpet was somewhat limited thanks to Covid-19, the event was back to being the usual full-on fashion bonanza as Hollywood stars returned in their droves.

Alana Haim, star of Licorice Pizza, oozed classic glamour with a delicately layered dress shimmering with sequins, paired with a simple silver sandal and nude nail polish. There was no fishtail hem but she still definitely channelling a subtle mermaid vibe.

There were more sequins courtesy of Jessica Chastain’s bodice and full skirt, accompanied by a huge ballroom-style ruffle – quite the change from the 1980s shoulder pads she sported in her leading role in The Eyes of Tammy Faye, for which she won best actress.

Best supporting actor nominee Kodi Smit-McPhee side-stepped the safe black tux choice, opting for a pale powder double-breasted blue suit and shirt. He teamed it with a silver neck chain and earring plus white brothel creepers for extra height. Not that he needed it at just over 6ft 1in.

Emilia Jones stars in best picture winner Coda and was one of a number of stars to bare their midriff on the red carpet in a halterneck sequinned number with a structured bodice.

Timothee Chalamet obviously couldn’t face the stress of doing up a bow tie so came up with a simple solution – go shirtless. And that’s right – more sequins.

Kristen Stewart, who was nominated for best actress for her portrayal of Princess Diana in Spencer, went for a bold look with black hot pants, a unbuttoned chiffon cream shirt, a black tux and side-swept hair. Not to mention a pair of killer stilettos.

Billie Eilish took the ruffle trend to the max with her Victorian-inspired black voluminous floor-length gown. Gothic glam with a sharp black haircut to match. Her Bond theme, No Time To Die, won best song.

First-time nominee Ariana DeBose went on to win best supporting actress for West Side Story. Having wowed us in different shades of yellow at this year’s Baftas and Critics Choice awards, she opted for bright red this time, looking relaxed in a wide-leg trouser and matching top. She added a voluminous cape for extra glamour.

Lupita Nyong’o, you never let us down. A vision in gold sequins that morphs into what we can only describe as floaty streamers from the waist down, dotted with a few pink spring flowers that shouldn’t work – but totally do.

Jason Momoa sported a blue and yellow handkerchief on the red carpet, the colours of the Ukrainian flag. Nicole Kidman was up for best actress for her turn as Lucille Ball in Being the Ricardo but lost out to Chastain. She walked the red carpet with husband Keith Urban, who wore a classic tux. Kidman plumped for a grey strapless gown with a train and an eye-catching puffball waist.

One of last year’s winners, Daniel Kaluuya, went bold with a bright teal double-breasted jacket with black lapels and a black shirt. A chunky gold ring completed the look.

Jessie Buckley, who was up for best supporting actress, caught up with the film’s director, Maggie Gyllenhaal, on the red carpet. Buckley sported a cream gown, while Gyllenhaal went for a structured off-the-shoulder number with ornate gold embellishment.

Will Smith looked quite the English country gent – before his now infamous slap and before winning best actor. Has he also been catching up on Peaky Blinders?

West Side Story star Rachel Zegler was a late addition to the presenting line-up and had said she wasn’t sure what she was going to wear. Luckily, she happened upon this on-trend beaded black dress with a striking knotted back strap.

Bill Murray looked dapper in a black-and-white shirt with polka dot scarf and a felt beret with leather trim. We can only assume the mini Oscars statuette wrapped in cellophane in his pocket is a lollipop – it was a fairly long ceremony so it might have come in handy when the hunger pangs kicked in.