Hakim Sulaimani is wearing a burgundy track jacket half-zipped over a crisp white shirt, with a black bag that reads “Degentrify your coffee” in bright orange letters slung across his shoulder. They say that some people wear their heart on their sleeve, but in Sulaimani’s case, it’s more of a mission statement. The soft-spoken 28-year-old is determined to build a completely new coffee economy for Yemen, some 7,000 miles away.

Sulaimani is the owner of Yafa Café, a bustling coffee shop on a busy stretch of Fourth Avenue in Brooklyn‘s Sunset Park neighborhood. The deep notes of freshly roasted coffee and the sweet fragrance of cardamom engulf your nostrils the moment you push open the glass door. On the front left wall hangs a series of photographs, one depicting the facade of his family’s ancestral home in Yafa, a district located in the southern part of Yemen. Another wall is decked out in woven baskets from the same region. Each piece of decor, each cup of coffee poured, each item on the menu is an ode to Yemen.

“I want to do for Yemeni coffee what Starbucks has done for the Indonesian coffee economy,” says Sulaimani, who hopes to see coffee become one of Yemen’s main exports in his lifetime. Sulaimani first started taking pride in Yemeni coffee when he was seven years old, thanks in part to a PBS show. A trivia question revealed that Yemen was one of the birthplaces of coffee, a fact that stuck with him. “I remember being a kid and feeling super hyped because I’d never heard of Yemen in any other context before in the mainstream,” he says. In college, when he was spending lots of time in coffee shops in New York City, he realized that Yemeni coffee could also be a viable career. He initially dreamed of a modest online business selling coffee beans, but that vision quickly morphed into the full-fledged café that he opened in 2019 with his cousin Ali Suliman (who has since left the business and is now a coffee consultant). Today, Yafa Café serves a modern menu that includes cardamom–brown sugar lattes, za’atar avocado toast, and some very popular breakfast burritos.

Yafa Café is in the same working-class neighborhood where Sulaimani grew up. It’s on the same block as his father’s bodega, Yafa Deli,where he was practically raised. His father, Tarek, who arrived in the U.S. from Yemen nearly three decades ago, remains skeptical of the café, Sulaimani admits with a laugh. But while his father still sells $1 cups of coffee at the bodega, Yemeni pour-overs go for $7 a cup at Yafa Café, not even 100 feet down the block. “Any type of coffee can trace its DNA to Yemeni coffee. So you’re drinking kind of the grandfather of coffee,” he says.

Sulaimani has high hopes for that coffee. He is frustrated that even though Yemeni coffee sells at record prices in the Western market (with one well-known shop making headlines for selling $16 cups), Yemen’s coffee farmers struggle to make ends meet—a situation made even more dire by the country’s ongoing civil war. Although Yemen has several 10th- and 11th-generation coffee farmers, many have shifted to growing khat, a popular amphetamine-like stimulant. For the coffee at Yafa Café, Sulaimani works with a small coffee farm in Yafa that relatives help manage, as well as a handful of other companies that prioritize the well-being of farmers and an ethical supply chain. He hopes to one day directly support more farms and to convince more coffee farmers to return to their original crop.

How to Make the Best Hot Cross Buns, Because It’s Not Good Friday Without Them

At Yafa Café, a big part of the business is educating customers, not only on why he charges $7 per cup of coffee but also through being transparent regarding his supply chain. His approach has paid off. In the years since it first opened, Yafa Café has become a glowing success, beloved both by the local community and by customers who trek in from neighboring states like Connecticut for the coffee and to order from the food menu, which, like the coffee, is rooted, but not fixed, in tradition. “I didn’t want to deal with people saying, ‘This isn’t how my mom makes it,'” says Sulaimani. Dishes like the shurba, or soup, with bulgur and a hawaij-spiced fried chicken sandwich have proven to be very popular. Another hit? The honeycomb buns, a sweet bread that his aunt would bake after her 4 a.m. prayers every morning when the café first opened. 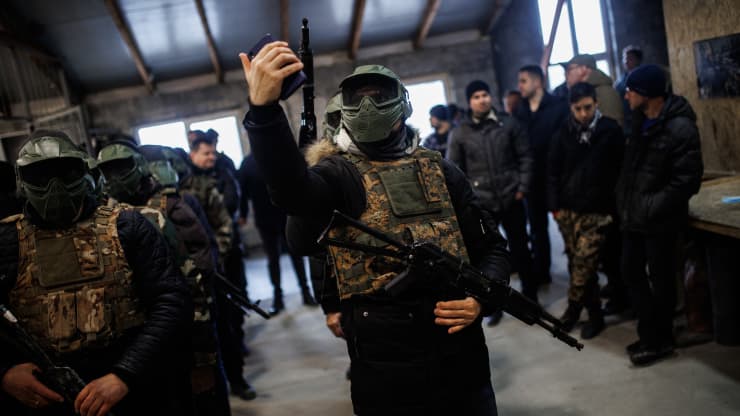 Previous
Russia-Ukraine War: What to know on Russia’s war in Ukraine
Next
Salma Hayek Is The Coolest Mum At Paris Fashion Week