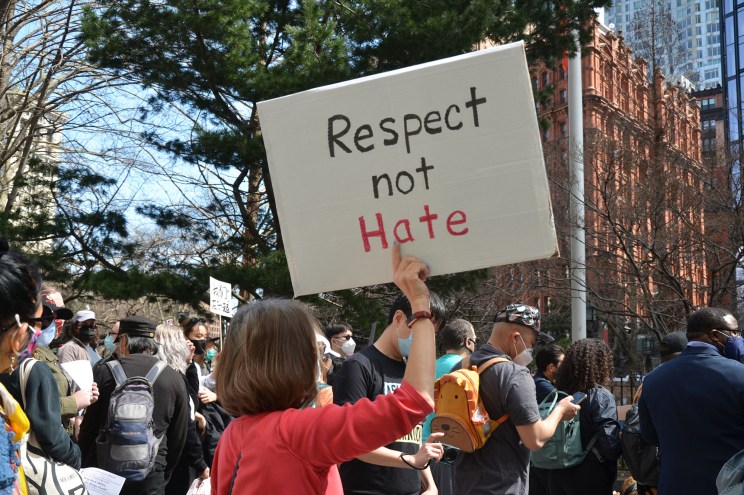 Erik Bottcher, my city councilman, says his mother is afraid to come to New York City, worried that she will be “hit.” She’s not wrong. The elected officials who claim to champion women’s rights aren’t taking women’s justified fears seriously.

It’s no accident that when Frank Abrokwa allegedly smeared his feces on a victim in a Bronx subway station on Feb. 21, the victim was a woman.

Before the attack, the suspect tried to hit on his victim, saying, “How come you don’t want to talk to me?”

Every woman or girl knows what this is like: Some stranger comes up to you and tries to talk to you. Do you entirely ignore him, and risk angering him? Or do you engage as minimally as possible, and try to find a way out of the interaction?

This is harder, of course, when there is no one else around — too often the case on subway platforms these days.

She ignored him — so he committed a premeditated act of retaliation designed to humiliate and degrade. He fled the scene to poop into a bag, returned, and smeared the poop across his victim’s face, hair and back, saying, “like this, b-tch?” as she tried desperately to escape. At his arraignment, Abrokwa used the same slur to address a female judge.

Abrokwa is now back on the street to escalate his behavior.

Signs show he will: He’s faced 44 past arrests, and has several violent cases pending from the past six months, including punching two people (men) in two different transit stations, and spitting on a man he called a “f—king Jew.”

Because Abrokwa hasn’t killed or raped anyone, judges in three separate cases have freed him on no bail, under the 2019 state law.

Sure, one judge could have held him, under a provision that allows for incarceration for repeat suspected offenders. But she didn’t, deeming insufficient evidence.

To proponents of the bail reform, this means it’s working. He could have been held — if everything had worked absolutely perfectly.

This insistence that everything is fine ignores the fact that courts are deeply dysfunctional, and the new bail laws did nothing to change that. The Democratic state Legislature just grafted yet more opportunities for catastrophic mistakes on a system that makes such mistakes every day.

The flipside of bail reform is that maybe Abrokwa deserves a second chance (or a 45th chance). In that case, he’s supposed to be getting “the help he needs,” in the new “thoughts and prayers” cliché.

Mayor Eric Adams said that “this horrific situation” was partly due to a “failed mental health system,” and Bottcher, too, says the people making his mother afraid are suffering from “untreated mental illness.”

OK, fine. If we’re not going to jail people, we’ll carefully tend to their mental needs.

But Abrowka was already on supervised release, because of his earlier alleged attacks.

What kind of mental illness does he have? Like the attackers in many recent violent crimes, he appears perfectly lucid, and understands cause and effect.

Why didn’t his “supervised release” regimen fail to catch and treat this mysterious illness? What should the treatment be? What happens if he resists treatment?

Everything to Know About the 2022 MTV VMAs: Performers, Nominees and More

Too many women are paying the price for the city’s failure to answer these questions. This year alone, at least six New York City women have been killed by strangers: Jennifer Ynoa, Kristal Bayron-Nieves, Michelle Go, Dorothy Clarke-Rozier, Gloria Ortiz and Christina Yuna Lee.

That’s more than an entire year’s worth of stranger-on-women killings in normal years. In 2018, no New York City woman was killed by a stranger, indicating how safe the city had become.

And too many women have had close calls — particularly in the transit system. City public-health researcher Nina Rothschild suffered a skull fracture in a Queens subway stairwell, attacked by a career criminal who just served an 18-year sentence out of state.

A 68-year-old woman was slashed in the Union Square subway last week.

Don’t let anyone tell you this is just life in the big city. It’s because of specific changes in state and city policies.

Bayron-Nieves’ attacker had been released without bail after an earlier attack. Lee’s alleged killer, too, was on no-bail supervised release. Go’s alleged killer was on parole, and had missed his appointments — with no penalty.

Police no longer arrest chronic, repeat turnstile-jumpers — so they are free to commit bigger crimes in the transit system.

As they look over their shoulders, New York’s women should wonder how feminist their progressive politicians are.

Previous
Ukraine conflict: Putin lays out his demands in Turkish phone call
Next
Transgender woman, 79, can claim Maine nursing home discriminated against her