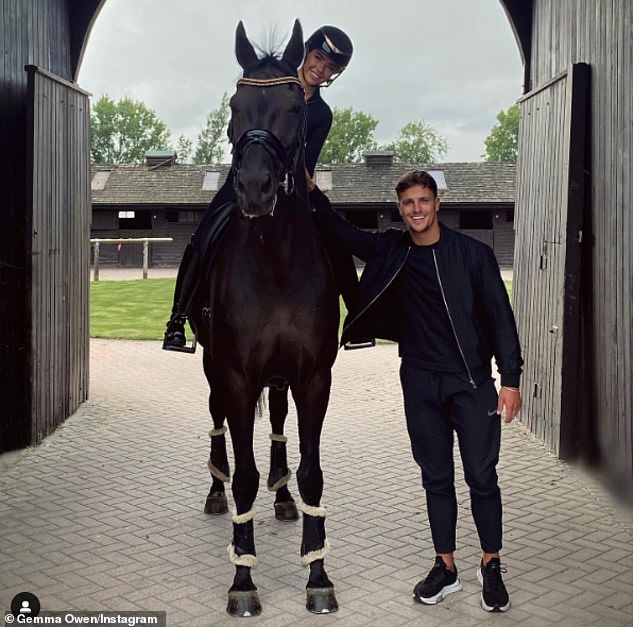 International dressage champion Gemma Owen has shared the sweet moment she introduced beau Luca Bish to her equestrian life and one of her champion horses.

Gemma, whose riding passion began when she was just aged seven took to her Instagram on Thursday to share an image of the fishmonger on the grounds of her Cheshire mansion while she was all saddled up.

Earlier in the day Luca, 23, took to his TikTok account to share the ‘adorable’ moment the couple were reunited after being apart for 24 hours.

As the Brighton native makes way from his Range Rover, Gemma can be seen running out to him barefoot and leaping into his arms.

Captioning the fifteen second clip, Luca wrote:  ‘POV: You’ve not seen each other for 24 hours after spending every single together for the last two months.’

Fans of the loved-up pair rushed to comment on their reunion with one writing: ‘ Best couple ever youse are so cute!’

A third commented: ‘My winners.’

‘The way she ran to you stop yous are adorable’ a fourth gushed.

The reunion comes after Gemma revealed she is still waiting for Luca to make their romance official.

The Love Island couple finished as runners-up in this years series, and despite leaving the villa over two weeks ago Gemma has revealed they are not boyfriend and girlfriend.

Fans of the show saw Gemma tell Luca she wanted to wait until he had met her family before they were official, but even after her beau got the thumbs up from her footballer dad Michael, Gemma is still waiting

Luca hinted he had big plans during the couple’s recent trip to Portugal, where the fishmonger met Gemma’s dad.

But during an interview on Wednesday, Gemma revealed she’s ‘still waiting’ for a romantic gesture and there’s ‘no updates’.

In a chat on Capital FM, she was asked: ‘Is this like an act of waiting, you’re wanting it to happen?’ to which Gemma replied: ‘Well I feel like at this point yeah!’

Host Lauren Layfield then said to the horse rider: ‘You’ve been waiting a little while now, and we’ve all been waiting, so now I want proposal levels of asking you out, do you know, I mean I want it big!’

Gemma replied: ‘I mean I know I said in the villa let’s wait till we get out, want you to meet the family, let’s not rush it, but now I’m like, okay…’

While her Love Island co-stars Davide and Ekin-Su have shared plans to move in together in Essex, Gemma said she and Luca are a way off that stage, explaining:

‘Right now we’re all just trying to settle down with our new lives, but I think definitely.’

‘Let’s be girlfriend and then we can talk about moving in together!’

Gemma has revealed that Luca has the ‘thumbs up’ from her dad Michael.

Speaking on The Six O’Clock Show, the dressage rider said they have ‘got approval’ from her sportsman dad after spending time together in Portugal.

Gemma detailed: ‘Family thumbs up, very good. We had a little trip, a bit of work, bit of relaxing, met all of them there. That was really positive and really nice.

‘Now we’ve got the approval, the ball’s in his court. Just waiting for him.’

She confirmed that the pair weren’t yet ‘offical’ and added: ‘I’m not being fussy at this point, not a big gesture just something nice. Let’s just put a label on it.’

Taking to Brian Dowling and Fionnuala Jones, Gemma continued: ‘Everyone’s asking me “are you and Luca official yet?” We’re basically living like we are official but we just don’t have that label.’

Luca and Michael’s meeting has been weeks in the making. The fishmonger only got the chance to meet Gemma’s mum Louise during Love Island’s meet the family episode.

Michael maintained a low profile during his daughter’s stint on the infamously racy ITV2 show, after initially admitting it was ‘a father’s worst nightmare.’

Share or comment on this article: Gemma Owen introduces beau Luca Bish to her beloved horse as couple reunite after 24 hours apart