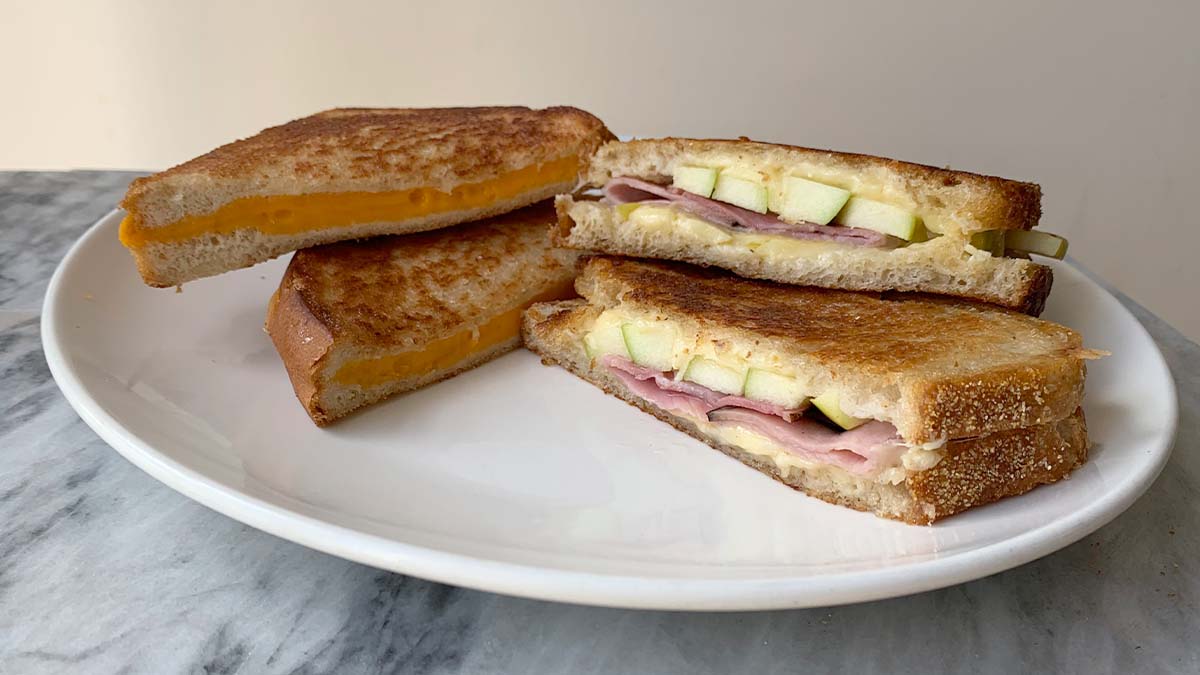 Modern vs. Traditional Grilled Cheese — Which One Reigns Supreme?

Out of all the unique food-centric holidays, National Grilled Cheese Day is one that speaks dearly to me as a sandwich lover. My childhood love for a gooey, crispy grilled cheese “sammy” has spilled over into adulthood, and that’s what led me to the idea of a taste test.

I decided to try making two versions of my favorite treat: a traditional grilled recipe versus an upgraded one. Let’s see which one is the cheesy winner!

Let’s get back to basics and take a dive into this classic grilled cheese recipe by self-proclaimed “Sandwich King” Jeff Mauro.

The recipe oozes nostalgia (as well as some serious cheese) and is as simple as it gets. You only need two types of American cheese, country white bread, and salted butter to enter into grilled cheese heaven.

When I tried this out, I smeared the bread with mayo instead of butter to get that golden brown crust and avoid burning the sandwich in the pan.

The traditional grilled cheese recipe has a solid foundation. But if you’re looking to build upon it, then it’s worth upgrading some of the ingredients.

This food technicality had me a little stumped at first. Thankfully, Laura Werlin (author of two cookbooks on grilled cheese) cleared up any confusion.

“Ham is great [in a grilled cheese], but it should be thinly sliced,” Werlin told Insider. “You’re adding that smokey flavor.”

With this in mind, I proceeded to whip up Glenn’s recipe — which only makes one sandwich. You can, however, double or triple the measurements as needed to make multiple grilled cheeses.

The Moment of Cheesy Truth

I would be the first person to tell you that nothing beats tradition. However, I actually enjoyed the modern grilled cheese more than the classic recipe. How to Start Cooking Authentic Italian Food at Home, According to Lidia Bastianich

Hear me out: Mauro’s recipe for grilled cheese had a milky, salty flavor and a nice gooeyness from the American cheese. Not to mention the sandwich had a crunchy texture as well from the toasted bread. But that was it.

If I were whipping up the traditional grilled cheese, I would definitely eat it alongside a bowl of soup or a salad to make it a complete meal.

In contrast, Glenn’s grilled cheese recipe had a variety of flavors. The smokiness from the ham, sharpness of the white cheddar and the slight sweetness of the apple all worked perfectly in this sandwich.