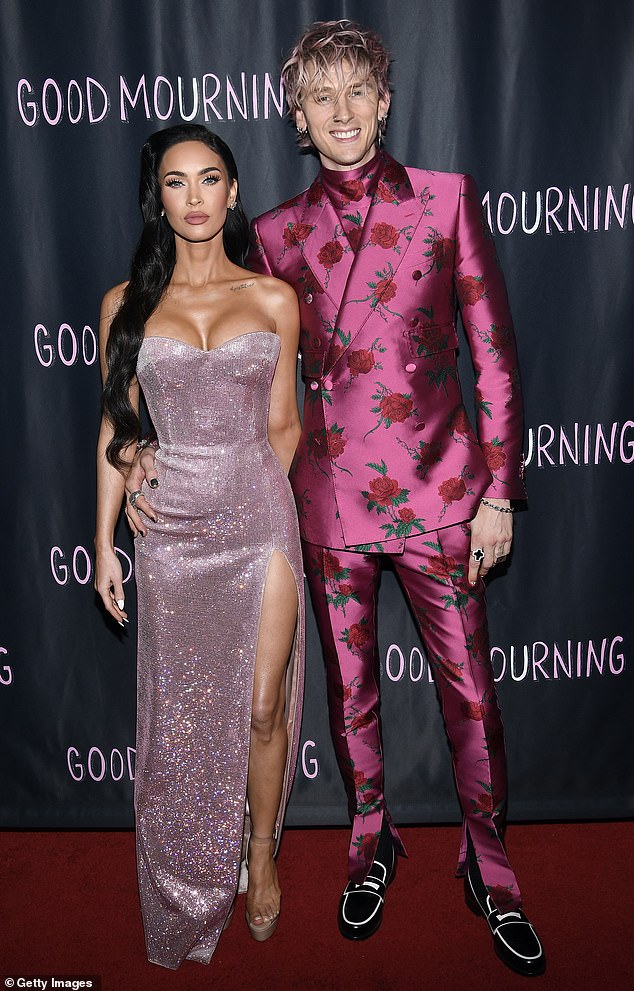 They met while working together on the movie Midnight In The Switchgrass.

And 32-year-old Machine Gun Kelly says he and 35-year-old fiancée Megan Fox will ‘always collaborate’ as their relationship continues to blossom.

On Thursday night the lovebirds walked the red carpet of their latest project together, the film Good Mourning.

While speaking to People MGK – real name Colson Baker – gushed, ‘I’ll always collaborate with Megan. I’m madly in love with her — and I’m also a fan.’

When it came to directing Megan he added, ‘She didn’t let me lead her character too much in any direction.

‘She was like “I got this. I understand what this character is.” She improvised and brought Kennedy to life, and I’ve heard a lot of people say that that’s their favorite character in the movie,’ he noted.

In the upcoming feature Baker portrays London Clash, who’s put in the position to choose between love and a movie role.

‘Every line that people wanted to keep in the editing station that [Megan] had said was stuff that she actually had said to me in real life,’ Colson revealed. ‘She was like, “You’re 30. It’s time to grow up.”‘

For the event Fox looked every bit the busty bombshell in a curve-clinging strapless gown covered in sparkly pink rhinestones.

Megan was able to show off her sky-high platform heels through her gown’s daring thigh-high slit.

The mother-of-three’s lengthy raven hair was swept over one shoulder and styled in loose, uniform curls that cascaded down her chest.

Tara Reid on DMX, Deepak Chopra & the Art of Ascension

His pants had a slight flare to them and he layered his suit jacket over a mock neck top of the same pattern.

Machine Gun Kelly and Megan’s love story began in May 2020, following the actress’ divorce from her husband of a decade, Brian Austin Green.

After less than two years of dating, MGK got down on one knee in January and asked Megan for her hand in marriage.

‘You’re such a gorgeous soul,’ she said in part. ‘I’m honored to love you and to be the recipient of your love. Happy Birthday love of my life.’

Previous
How Kristin Chenoweth is connected to the Girl Scout murders Next
Who Is Ellen Barkin And Why Is She Testifying In The Johnny Depp Vs Amber Heard Trial?