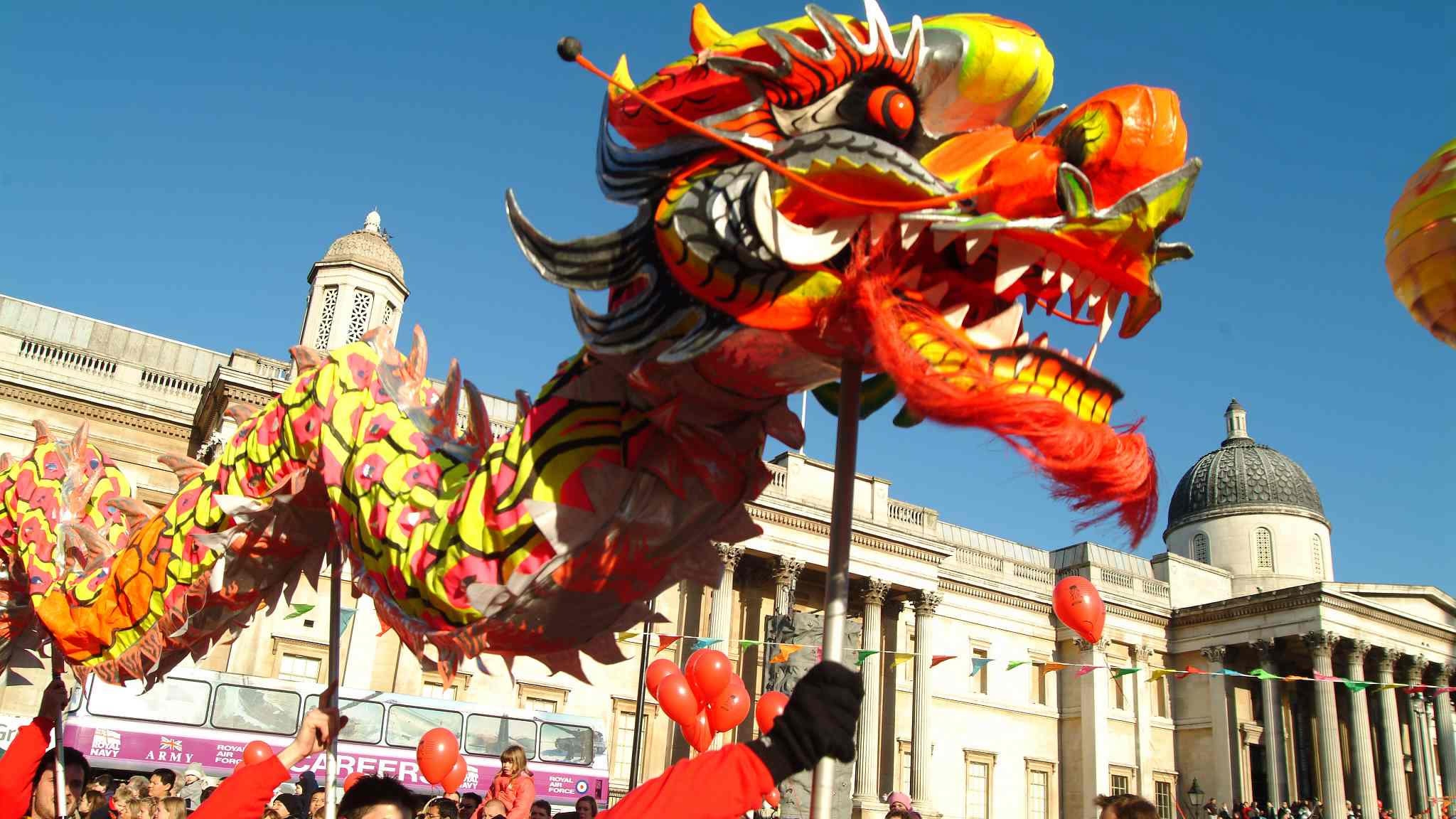 When people talk about the “holiday season” in the U.S., they typically refer to that period between Thanksgiving dinner and New Year’s Day. But shortly after that, another massive holiday brings friends and family together in several Asian countries, with concurrent parties that carry on the traditions stateside. The Lunar New Year, most commonly associated with the Chinese New Year or Spring Festival, typically falls sometime between January 21 and February 20 annually. Lunar New Year 2021 is on February 12, and in terms of the Chinese zodiac animal, it’s the Year of the Ox.

It’s called the Lunar New Year because it marks the first new moon of the lunisolar calendars traditional to many east Asian countries including China, South Korea, and Vietnam, which are regulated by the cycles of the moon and sun. As the New York Times explains, “A solar year—the time it takes Earth to orbit the sun—lasts around 365 days, while a lunar year, or 12 full cycles of the Moon, is roughly 354 days.” As with the Jewish lunisolar calendar, “a month is still defined by the moon, but an extra month is added periodically to stay close to the solar year.” This is why the new year falls on a different day within that month-long window each year.

Here’s what to know about Lunar New Year traditions, and what more than 1.5 billion people do to celebrate it.

The Lunar New Year isn’t only observed in China, it’s celebrated across several countries and other territories in Asia, including South Korea and Singapore. In Vietnam, Lunar New Year is known as Tết, and in Tibet it’s Losar. In the U.S., though, it’s most commonly associated with what’s often called Chinese New Year, the American version of China’s 15-day-long festivities.

“It’s been popularized because the largest segment of the Asian-American population in the United States is Chinese,” Maasbach explains. “It’s kind of like that old Friends joke, ‘In China, they just call it ‘food’; in Chinese, it’s just the new year.” But in America, she says, where the holiday is mainly experienced in the Chinatowns of various cities, “we just made it ‘Chinese New Year.'” In Maasbach’s experience, while Lunar New Year is the more inclusive and accurate term as it applies to the holiday worldwide, celebrating is “not as popular with some of those immigrant groups in America.”

As it’s also become popular with people of all nationalities who visit Chinatown to eat and watch the parade performances, Maasbach adds, “it’s sort of like our stake in the country, if you will, and that’s really a pride point.”

That name was popularized after Communist Party leader Mao Zedong took power in China in 1949. “The term was coined before the Communists, but it was used extensively by the party to replace ‘the new year,’ because they tried to get rid of anything that’s old—all of the superstitions and religion, including the celebrations,” says Kian Lam Kho, chef and author of Phoenix Claws and Jade Trees: Essential Techniques of Authentic Chinese Cooking. During the Cultural Revolution from 1966 to the year Mao died in 1976, the traditional lion and dragon dances were also a point of contention, according to History.com.

Nowadays, Kho explains, “in mainland China, almost everybody refers to the new year as Spring Festival. But if you’re in Hong Kong, Taiwan, or anywhere else in most of the Chinese diaspora, they’re still calling it ‘new year.'”

Spring Festival is a 7-day vacation in China.

There is a weeklong holiday in the People’s Republic of China during Spring Festival; in 2021, the public holiday is February 11-17. Ahead of that holiday comes a bustling travel period known as Chunyun, in which millions of people trek home by plane, train, and automobile to celebrate the new year with their extended families. CNN deemed Chunyun “the largest human migration on the planet” ahead of the Lunar New Year in January 2020, projecting that 3 billion trips would be made (though this was likely impacted by then-burgeoning pandemic travel restrictions).

“I tell people who want to visit Asia, in general, avoid Chinese New Year because you won’t be able to get anywhere!” laughs Kho.

Lunar New Year traditions include the Dragon Dance and the distribution of red envelopes filled with money.

“When you walk around Chinatown, if you’re not familiar with the layers of meaning in these festivals, you may miss them,” Maasbach says.

Upside-down fu characters: On Chinese New Year, you’ll commonly see a calligraphy character on a square of red paper, hung in a diamond shape. The character, 福 [fú], which means good luck, is hung upside down for Lunar New Year. “The word ‘to arrive,’ or to begin, is a homophone for the word for upside down,” Maasbach explains. Through this bit of pictorial wordplay, the symbol effectively means that good luck is arriving, or pouring down on you.

Red pockets full of money: Known as lì xì in Vietnamese or hóngbāo in Mandarin, in China they’re traditionally gifted from an elder or parent to children, or really anyone who’s unmarried. “It’s really fun, because even if your brother is 40 and he’s unmarried he still gets red envelopes,” Maasbach says. The custom arose out of a tradition of using coins as a gift to ward off evil spirits.

It’s an occasion for kids to have a little fun when asking for an envelope, too. When asking, “you have to say things like ‘xin nian kuai le’, or ‘Happy New Year,’ or ‘gong xǐ fā cái’, which means ‘make money in the new year’. But it kind of has a rhyme,” Maasbach says. “You’ll say, ‘gong xǐ fā cái, hóngbāo ná lái!'” This translates to, ‘Make a lot of money in the new year—now give me my red envelope!”

Firecrackers: Firecrackers and fireworks are often set off throughout Lunar New Year, both to ward off an ancient monster called Nian, and because it’s become a raucous way to celebrate. It’s common to see families shooting off the equally festive, and non-fiery, confetti cannons on the streets of U.S. Chinatowns on New Year’s Day.

The Lion Dance and Dragon Dance: Traditional dances and gymnastic performances are an exciting part of a Lunar New Year parade. A Lion Dance typically features two performers inside the costume, operating as the creature’s front and back legs. “It’s supposed to send away any evil spirits,” Maasbach says. “It’s an opportunity to feed the lion with red envelopes.”

The Dragon Dance features visible puppeteers holding poles as they make the dragon move in a flowing motion. While these two dances are among the best known, Maasbach says they’re just a few examples native to specific regions. “China is a very diverse country, with many different practices,” she continues. “The Fan Dance, the Phoenix Dance, the Lion Dance—those are all provincial expert pieces.”

Again, attracting—and carrying over—good fortune into the next year is a major theme of the holiday, and so is protecting against bad fortune. With that comes a lot of superstitious practices, Maasbach says.

“Pay back your debts before the new year starts,” Massback continues, or it’s bad luck.

Don’t cut your hair on the Lunar New Year—in fact, stay away from scissors altogether. “My mother would be irate if I cut anything with scissors on Lunar New Year,” says Maasbach. In a time of family togetherness and celebrating fortune, it’s taboo because it’s believed that you’ll be severing those connections.

Avoid wearing black or white, as they’re associated with mourning. To attract luck, “you have to wear red,” Maasbach says, adding that her late grandmother wore red almost everyday, because “she wanted everything to be happy.”

Don’t do laundry on the first or second day of the new year, according to travel site China Highlights, “because these two days are celebrated as the birthday of Shuishen (水神, the Water God).” Avoid washing your hair too, lest you wash your good fortune away.

Don’t sweep after Lunar New Year’s Eve, the site adds, or you’ll be sweeping away accrued wealth and luck.

Several traditional Lunar New Year foods also carry extra meaning in China, because the way they’re pronounced is a homophone for another luck-related word. For example, “the pronunciation for ‘fish’ in Mandarin and many other dialects is ‘yú’, which is the same pronunciation as ‘leftover’,” Kho says. “The idea is that every year, you want an abundance of food or wealth, so that you have it left over for the next year.”

It remains to be seen how the coronavirus pandemic will affect Lunar New Year celebrations in the U.S. and in Asia. Hong Kong, which was in partial lockdown as of December 2020 due to a fourth wave of infections, has canceled their iconic parade and their fireworks for the coming Year of the Ox. San Francisco has canceled their festival and parade as well. It’s also unclear how COVID-19 will impact the yearly Chunyun travel rush, if at all (millions of Americans traveled over the 2020 Thanksgiving holiday, against public health recommendations).

The Museum of Chinese in America is holding a virtual MOCA Fest through February that includes Chinese cooking classes, cultural events, and classes for kids. “I don’t think you’ll ever see Chinese Americans in the U.S. not celebrate,” Maasbach says.

Previous
How to Find Inner Peace and Happiness in the Chaos

Next
Should You Be Canceling Your New Year’s Eve Plans?