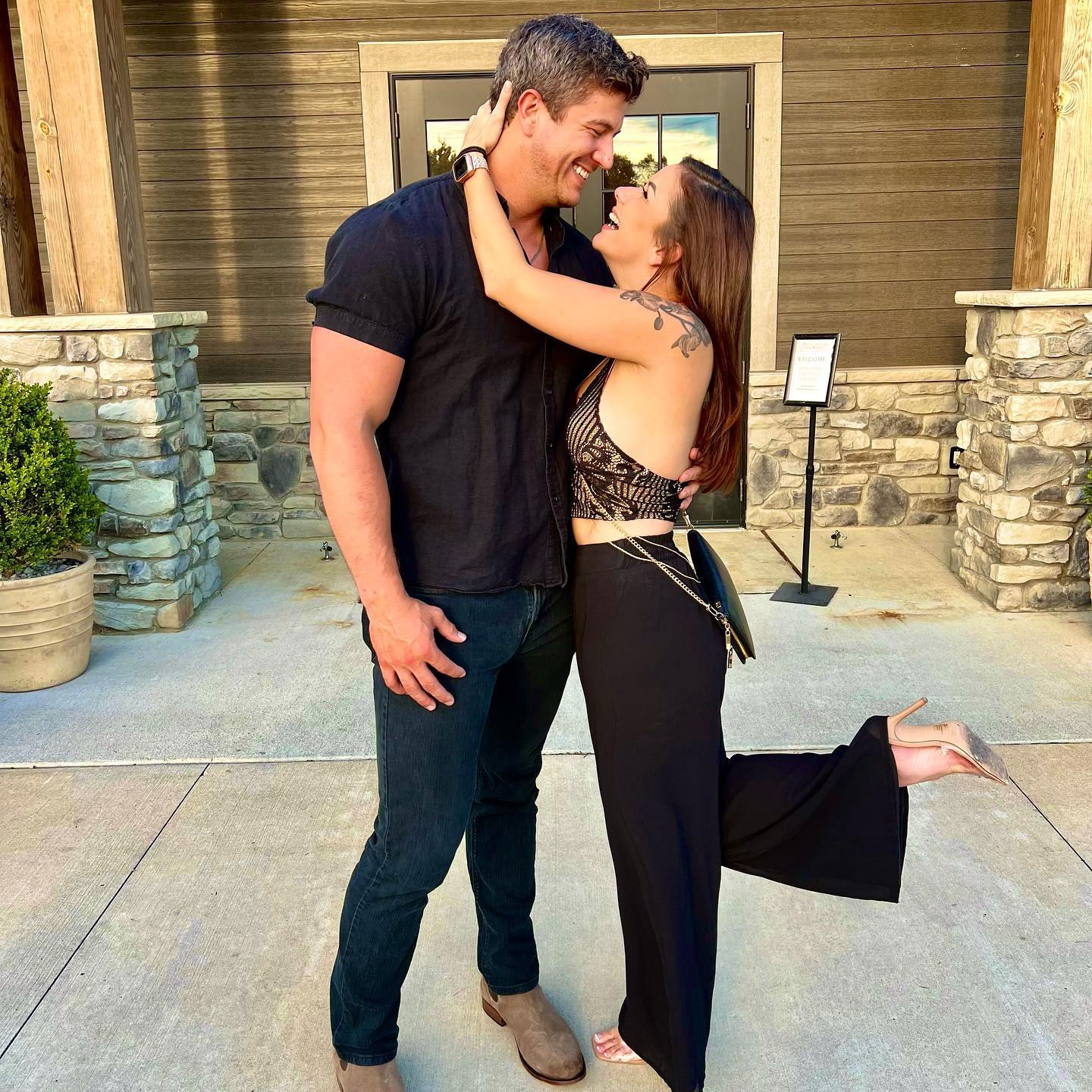 Finding true love in the pods! While not all couples found their perfect match on Love Is Blind, season 1 alums Matt Barnett and Amber Pike’s romance proves that the show’s unique process can work.

In February 2020, viewers were introduced to the Georgia natives on the inaugural season of the Netflix dating show, which was filmed in late 2018. In addition to Pike, Barnett also formed connections with Jessica Batten and Lauren “LC” Chamblin. Ultimately, he chose to pursue the former tank mechanic and the couple got engaged and said “I do” by the season finale.

“My wedding certainly wasn’t what I always dreamed it would be growing up, and it wasn’t what the rest of the world saw either,” Pike wrote via Instagram in February 2021 while reflecting on her unique nuptials. “I’m sure over time my memories of the day will fade, the details will disappear, and my lifelong expectations versus my reality will become irrelevant… but one thing I’m sure I will never forget is the way I felt.”

Ever since the pair tied the knot on TV, they have offered their supporters a glimpse into their relationship. The reality stars have continued to grow their connection and constantly share their affection for one another.

In May 2020, the duo gave Us Weekly an inside look into their lives during their COVID-19 quarantine experience. “We’ve been taking this time to get back into exercising together because we’re so out of shape,” Matt joked to Us, adding that whenever he and his wife “don’t feel like cooking” they order takeout from one of the local Atlanta eateries to “support the restaurants.”

The couple’s relationship has only continued to bloom in the years since. “Not just a good vibe, the best vibes🖤✨. When it comes to relationships, you can check all the boxes you want but nothing tops finding someone you have chemistry with and that matches your energy,” Pike wrote via Instagram in September 2022. “Remember when you’re looking for your other half and checking off boxes to keep your eye open for those intangible and undefinable qualities that will keep the magic in your life.”

In November 2022, the Netflix stars celebrated their fourth wedding anniversary and acknowledged the accomplishment on social media.

“4 years of being married to the hottest wife ever! Here’s to at least 80 more anniversaries,” Barnett penned in a touching tribute via Instagram in November 2022.

For her part, Pike chose to mark her appreciation for not only her spouse but for their admirers as well. “Thanks so much for all the Anniversary well wishes! Just wanna make sure y’all know we appreciate all the love and support,” she captioned her own post, which she followed up with a playful remark for the couple’s next anniversary. “Someone told us that the four year was supposed to be the ‘Fruit Theme’ Anniversary… so obviously hubby and I spent the day in North Georgia tasting all the wine to our heart’s content at @wolfmountainvineyards . If anyone has some ideas for what we can do for our 5 year we are open to ideas lol I think the ‘Wood Theme’ could get pretty interesting 😉.”

Scroll down for Pike and Barnett’s relationship timeline:

While the show did not air until two years later, the couple embarked on their romantic — and reality TV journey — in late 2018 and tied the knot that November.

The first season of Love is Blind premiered on February 13, 2020, and viewers got to see Pike and Barnett’s love story unfold from their first connection in the pods to their nuptials.

“One of the craziest, most wonderful experiences of my life. I wouldn’t trade it for anything in this world. #loveisblind #loveiscrazy #loveisanadventure #takethatleap,” Barnett shared via Instagram at the end of February about his experience meeting his wife on the dating series.

During quarantine, the couple gave Us a look into their quarantine routine.

“Most of our days are broken up walking our beautiful dog, Koda,” Barnett explained to Us. “She’s such a cutie pie.” Pike also mentioned how they like to play Pokémon Go as well.

In honor of their second wedding anniversary, the former Georgia army guard shared a steamy snap of the two via Instagram.

“Two years ago today since we officially said “I do”… and I still can’t keep my hands off you,” she wrote. “Happy 2yr Wedding Anniversary to my frustrating-crazy-sweet-handsome hubby. I LOVE YOU @barnettisblind.”

While the second season of the Netflix show was airing, Pike took to Instagram to reflect on her own experience and unique ceremony.

“My wedding certainly wasn’t what I always dreamed it would be growing up, and it wasn’t what the rest of the world saw either,” she wrote via Instagram. “I’m sure over time my memories of the day will fade, the details will disappear, and my lifelong expectations versus my reality will become irrelevant… but one thing I’m sure I will never forget is the way I felt.”

In honor of the couple’s third anniversary, Pike posted a video slideshow on social media of the pair over the years.

“Late post : because obviously things never happened unless the internet knows about it…,” she captioned the video. “But seriously, Happy Anniversary to my Love @barnettisblind . This third year was definitely charmed, and judging by the pics I’d say we’ve got this kissing thing down pat! If it’s cool with you though I’d like to keep practicing 😘.”

The Love Is Blind alums continued to show how much they care for one another, with Pike sharing a heartfelt message for her husband via Instagram.

“‘Some hearts just get lucky sometimes,’” she penned. “Having a partner that thinks life is an adventure meant for making memories and having amazing experiences instead of making money and having things is something I’m super thankful for. It’s not a life that’s right for everyone, but I think I’m really lucky because it’s a life that’s just right for me.”

The twosome celebrated their fourth wedding anniversary together.

“4 years of being married to the hottest wife ever! Here’s to at least 80 more anniversaries,” Barnett wrote via Instagram.