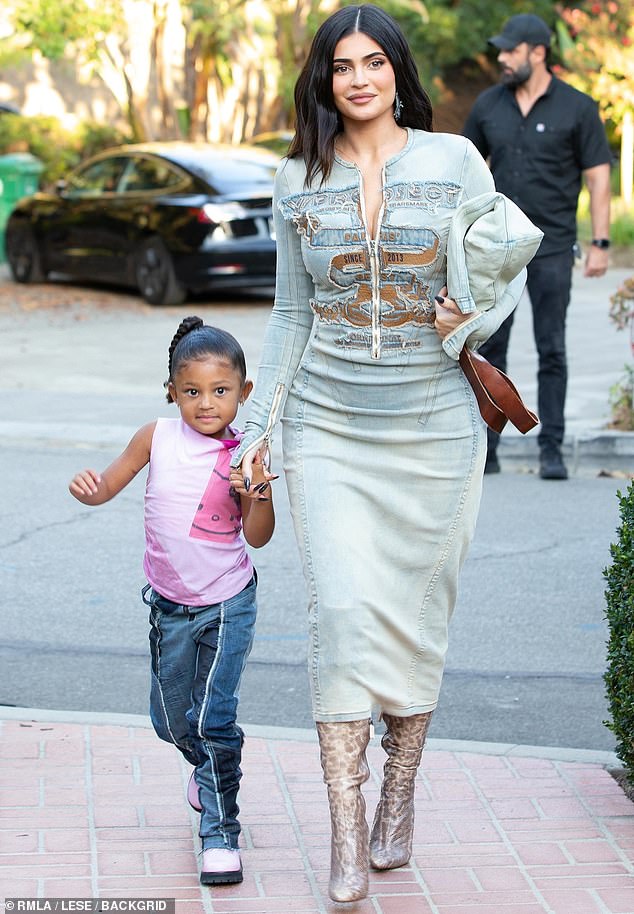 Kylie Jenner was spotted holding hands with her four-year-old daughter Stormi as they arrived at a Beverly Hills party this week.

The lip kit mogul was bringing her little tyke to an investor event for 818 Tequila, the brand controversially founded by Kylie’s big sister Kendall Jenner.

For her latest night out Kylie, 25, went country chic in double denim, accentuating her hourglass figure in a skintight denim dress with tan leather accents.

Her plunging neckline allowed the reality star to flash her ample endowments as she oozed glamour on the way to the fete.

Sharpening her unmistakable features with heavy makeup, Kylie wore a luxurious black hairdo that cascaded over her shoulders.

Balancing expertly on a pair of snakeskin-print high-heeled boots, Kylie brought a denim jacket along in case of a drop in temperatures.

Inside the party, Kylie could be spotted mingling with her sisters Kim and Khloe Kardashian and Kim was seen chatting to Katy Perry’s husband Orlando Bloom.

Kendall launched 818 Tequila last February and named it after the zip code she was born in, igniting a predictable cultural appropriation row in the process.

Meanwhile Kylie shares Stormi, as well as an infant son whose name she has not publicly disclosed, with her rapper boyfriend Travis Scott.

Travis and Kylie welcomed their newest baby this February just one day after Stormi’s fourth birthday and initially announced his name was Wolf.

She explained: ‘WE JUST REALLY DIDN’T FEEL LIKE IT WAS HIM. JUST WANTED TO SHARE BECAUSE I KEEP SEEING WOLF EVERYWHERE.’

The Female First Awards 2021: Album of the Year

The family recently jetted off to the Bahamas to ring in Kylie’s 25th birthday on a breathtaking sun-kissed holiday that was documented on social media.

Kylie celebrated her birthday on a yacht with a group that included her sisters Kendall Jenner and Kim Kardashian.

Kylie’s daughter was on hand, along with Kim Kardashian’s little girl Chicago, who was born just a couple of weeks before Stormi.

Meanwhile Travis is in the midst of a comeback after a deadly stampede claimed 10 lives at his Astroworld festival performance last year.