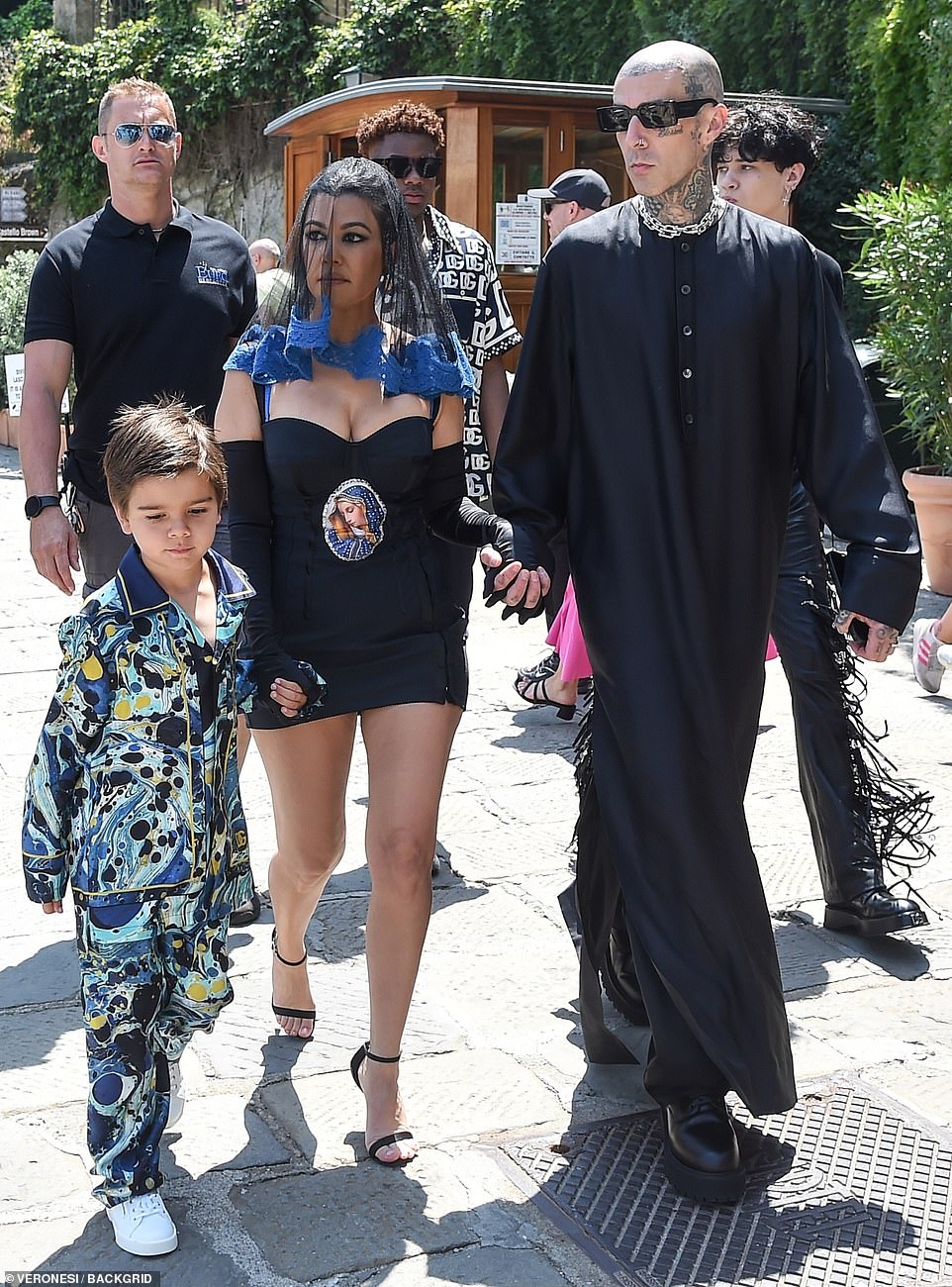 The intimate wedding of Kourtney Kardashian and Travis Barker is due to be held tomorrow on the secluded terrace of a medieval castle, MailOnline can reveal.

Final preparations were today underway to prepare the romantic venue behind the high walls of the ancient Castello Brown fortress in the Italian village of Portofino.

Staff have been sworn to secrecy and made to sign legal agreements, forbidding them from talking about the wedding, which has been billed as the showbiz event of the year.

The ceremony was widely tipped to take place sometime this weekend, but we can exclusively reveal that guests will gather tomorrow to watch the couple tie the knot.

The castle, which was once used as a stop off point for Richard the Lionheart on his way to the Crusades, normally operates as a museum for tourists.

But the entire building on a hilltop overlooking the historic seaside village near Genoa has been sealed off since last Wednesday after the Kardashians hired it for a week.

As wedding preparations gather place, it has been revealed that an intimate garden grotto with outlandish gold structures is set to play a key role in the wedding.

The amazing set was being erected on Saturday in the grounds of a historic beachside house near the Castello Brown fortress, which has been widely tipped to be the venue for the main wedding party.

Much of the Kardashian family are staying in a house next door to the medieval castle and on Saturday, a 12ft high gold structure in the shape of a huge gilded picture frame or mirror was erected at one end of the garden plot beneath the house.

Workers were seen hanging leaves and foliage from a curved frame over the length of the 40ft long garden to create the effect of a woodland hideaway.

Two other giant gilded objects with wide brimmed bowls on top, possibly to become flaming bowls to illuminate the area, were also seen in place.

Dozens of candles in glass jars were also lined up ready to be lit and moved into position to in what promises to be an enchanting and romantic scene.

The secret garden is on the hillside beneath the castle and enjoys magnificent views over the Mediterranean.

Curious tourists in hire boats anchored in the cove adjacent to the castle were watching the last minute preparations taking place this afternoon.

MailOnline has revealed that the wedding is due to take place tomorrow when paths around the perimeter of the castle and the rented house are closed off to the public.

The closure will ensure that mother-of-three Kourtney and Blink-182 drummer Travis will escape the prying eyes of onlookers and be able to control publicity for their big day.

A steep path leading up to Castello Brown from Portofino harbour has remained open so that locals and visitors can still access the rocky coastline on the seaward side of the fortress.

But signs have now gone up saying that the path will be closed on Sunday and re-opened on Monday in an apparent measure to guarantee privacy for wedding guests.

Security cameras have been erected to help monitor the area and keep unwanted visitors away.

Teams of workers were today seen moving around boxes containing sound equipment and trays with glasses and boxes of drinks between the castle and a nearby storage area.

Security guards refused to answer questions at the entrance to the castle, saying only that it was closed to members of the public.

American and Canadian tourists from a cruise ship stopping off at Portofino were today being escorted by their tour guides on walks around the castle perimeter.

Kourtney and Blink-182 drummer Travis are believed to be staying on the 213ft superyacht Regina D’Italia which is moored just offshore from the tourist hotspot fishing village.

It is believed that the couple will be ferried to their wedding venue by tender boat, arriving at a small private jetty on the secluded cove at the rear of the castle.

Workers were today seen attaching a silver carpet to the wooden planks of the jetty which is in the grounds of a historic house next door to the castle.

The house is believed to be currently rented by members of the Kardashian family who are staying there during the festivities.

But the closure of the path tomorrow will mean that the couple will be able to move between the house and the path away from the prying eyes of tourists and the paparazzi.

But they will still have to climb more than 100 steps from the jetty to the castle, meaning they may change into their wedding finery in private rooms inside the fortress which dates back to Roman times.

A security guard with a radio handset at the entrance of the house insisted today: ‘I’m not allowed to say anything. I don’t know anything about a wedding.’

Kourtney’s children Mason, 12, Reign, seven, and Penelope, nine were seen around the jetty on Friday.

Her mother Kris Jenner, 66, who recently revealed that she had been ‘sworn to secrecy’ about the upcoming nuptials, was seen out shopping in the village earlier in the day.

The whole Kardashian clan including Kourtney’s sister Kylie, 24, later gathered on Friday night for a pre-wedding meal at Ristorante Puny near the harbour.

A member of staff connected with the wedding preparations smiled as she told a MailOnline reporter: ‘Yes, I am working here, but I can’t talk to you because I have signed an NDA (a Non Disclosure Agreement).’ Bright floral arrangements, designer suits and chic outdoor furniture were seeing being delivered to the venue on Friday, as a helicopter lowered a large wooden structure into the grounds of the castle.

Local villager Dino who was walking his border collie Zack beside the castle this morning, said: ‘We are used to VIPs visiting here because Portofino is such a beautiful place.

‘The boss of Pirelli tyres and Berlusconi’s son have houses here. Celebrities generally arrive in their yachts and then come ashore

‘The Castle is used for lots of events including weddings. The terrace is magnificent and has the most wonderful views in the whole of Portofino.

‘It is often closed to the public, but it is very unusual for the paths to be closed as well. It does suggest that this wedding is going to be very big.

‘I have never known the path and the park around the castle to be closed before. I will have to find somewhere else to walk my dog tomorrow.’

Kourtney and Travis unofficially married after the Grammys in Las Vegas and held an official ceremony in Santa Barbra last Sunday to legally become man and wife.

But it is believed that they will be repeating their vows under the Italian sunshine to confirm their union in front of family and friends.

Guests are expected to include Kris, Kourtney’s sisters, Khloe and Kim Kardashian and Kylie and Kendall Jenner, and Kris’ partner Corey Gamble

But Courtney’s former partner Scott Disick – the father of her three children – has not been invited.

It is believed that 46-year-old Travis’ son Landon, 18, and daughter Alabama, 16, will also be there.

But it is thought that Kourtney’s maternal grandmother Mary Jo ‘MJ’ Campbell and Travis’ dad, Randy, have not travelled abroad for the ceremony, although they were present at their legal courthouse nuptials.

Next
My Body, My Choice: 10,000 People Protested For Abortion Rights In New York City