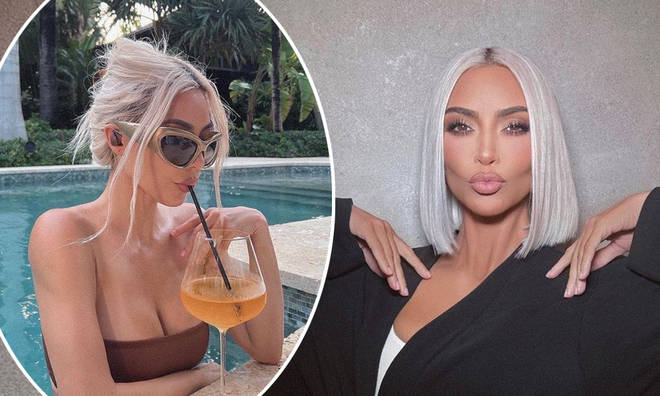 Kim Kardashian is no stranger to a Photoshop edit, but she’s come under fire once again for tweaking one of her bikini photos.

Kim Kardashian posted a string of pictures from her pool, showing off her new collaboration with Beats, but fans are zooming in for the wrong reasons.

Taking to Twitter, fans have pointed out she’s edited her neck in some of her new bikini snaps.

It appears she edited out her trap muscles to make her neck look slimmer.

TikTok user and photographer Caroline in the City called out Kim’s pics, claiming Kim made some tweaks to make her neck look slimmer.

She also showed what the photo would have looked like without the edits.

Caroline explained the liquify tool had most likely been used to alter the water behind her neck, pointing out curved lines in the pool.

“As you can see, the water reflection in the background starts to look a lot more natural as well, we don’t have that warped effect,” she said.

Over on Twitter, fans are wondering why Kim’s edited her neck, with one writing: “Why did you photoshop your neck, that is so weird lolol.”

“Why photoshop out traps? To make the neck look slimmer?” Quizzed another.

“Apparently kim kardashian has been photoshopping a whole ass muscle out of her neck in pictures…girl why are you saying that your standard of beauty is ‘attainable’ when you’re literally trying to make people feel like they should be missing body parts to look good [sic],” tweeted a third.

It’s not the first time Kim has been accused of Photoshopping her pics; she once edited out her belly button in a pic promoting her underwear range SKIMS.