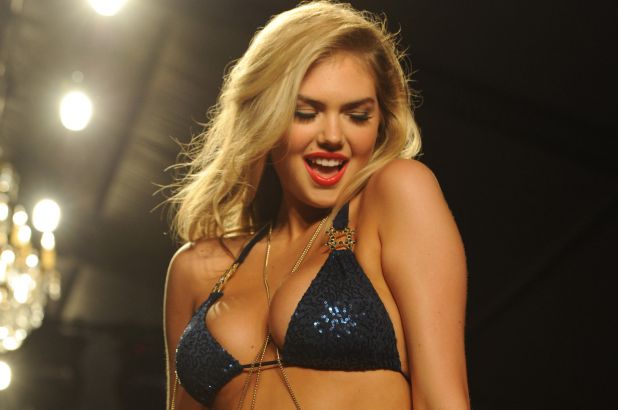 Another day, another impressive feat of strength that Kate Upton pulled off with ease. The Sports Illustrated Swimsuit alum pulled her personal trainer, Ben Bruno, on a sled across an outdoor workout space, making the entire thing look deceptively easy.

“It’s always fun working out with @kateupton,” Bruno wrote in a caption on Instagram where he posted the video of Upton completing the exercise. “I know I’m supposed to be the trainer, but she’s gotten so strong that she pushes me a lot too now, and it’s awesome to see.”

Beyond just making for an attention-grabbing social media post, backward sled pulls provide both strength and cardio benefits. “The sled pull is a great strength-based cardio move — you’ll get your heart rate up while working your quads, hamstrings, glutes, lower back, and calf muscles in one movement,” Alyssa Ages, a trainer at Uplift Studios, Epic Hybrid Training and Global Strongman Gym, previously told Shape. “It also helps develop power and strength in the glutes and hamstrings and, because pulling the sled backwards takes the focus off of your quads, works the oft-neglected lower back to boot.”

In his caption, Bruno went on to note that lifting weights won’t necessarily make someone “bulk up,” even if they’ve built up enough strength to pull their trainer on a sled à la Upton. “So many women are apprehensive to lift weights out of fear of bulking up, but Kate is proof that won’t happen if you train correctly,” he writes. “It’s one thing for a hairy meathead like me to tell women to lift weights, but it’s a much more powerful message coming from Kate because the proof is in the pudding.”

Upton previously opened up to Shape about that very idea. She explained that the pressure to be a certain size for her career as a supermodel impacted her approach to workouts until she realized that heavy weight training doesn’t have to mean bulking up. “What really helped me deal with the pressure of the fashion industry and having to be a certain weight was taking myself out of that conversation completely,” she said in the interview. “Once I started focusing on being strong and doing weight training, I became the size that I needed to be for modeling. I changed the battle inside my head to be about strength and having balance in my life instead of fitting into a pair of jeans.”

Upton also discussed working with Bruno — and how he’s helped her build up to the heavy weighted sled exercise she’s now pulling off. “When I started training with him, he would say, ‘Let’s put 500 pounds on the sled,’ and I would immediately say, ‘I can’t do that.’ So he started standing on the sled so I couldn’t see how much weight was on there,” she said in the interview. “Now my attitude has changed completely, and I’m always pushing myself to do more.”

Though Upton can now make the sled pull exercise seem effortless, she’s put in a lot of work to get to this point. Bruno has praised Upton’s work ethic in the weight room and also at home, as they had to train virtually for a period of time in 2020 due to the COVID-19 pandemic. As the trainer put it in a previous Instagram post praising her form and strength, “She’s super consistent and always brings her best effort, which is the recipe for success.”

Of course, this isn’t the first time Upton’s showed off the results of her work. She’s previously pushed her husband up a hill, tackled 110-pound landmine lunges, and nailed 80-pound single-leg Romanian deadlifts — so her latest accomplishment is to be expected. Next
How to French Braid Hair