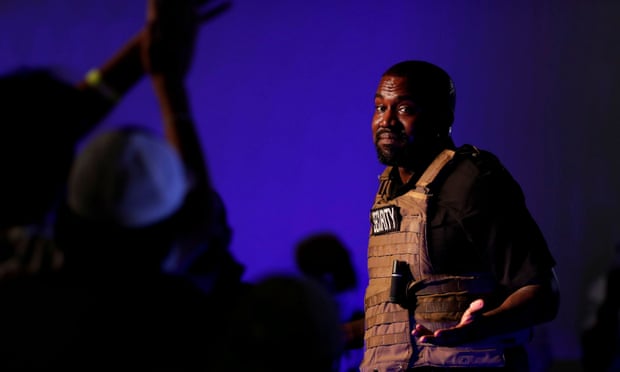 Kanye West: no American icon has ever self-destructed so spectacularly

Share
Home
Celebrity
Kanye West: no American icon has ever self-destructed so spectacularly

In 2009, Kanye West was riding high. 808s & Heartbreak – his fourth studio album and a marked departure from his soul-based, hip-hop sound – proved a resounding critical and commercial triumph. A foray into clothing design had culminated in a Paris fashion week sneaker show with Louis Vuitton and a shoe line with Nike, the first for a non-athlete.

No longer was West the dorky producer turned rapper agitating to break out of Jay-Z’s shadow. He had become something even bigger: a true star. The only person who could stop Kanye was Kanye – or Ye, as he’s preferred to be known of late.

Now his empire lies in a smoldering heap in the wake of the 45-year-old artist’s October media blitz.

West himself says he lost $2bn in a single day this week.

First there was the smear campaign against his ex-wife Kim Kardashian, then the White Lives Matter fashion statement in Paris, then his complete transformation into an alt-right puppet. And it crescendoed with West’s fusillade of unprompted antisemitic commentary, starting with him needling the Kushner family during an hourlong Tucker Carlson sit-down in early October, that cost West his diverse portfolio.

Gap, JP Morgan and Creative Artists Agency are among a raft of partners that quickly cut ties. All the while West dug in, claiming on a podcast appearance that Adidas – whom West teamed with after leaving Nike – would never leave him regardless of how many more antisemitic assertions he made.

But a week later, Adidas went their own way too, a move the company reckons cost them $246m in potential fourth-quarter earnings. Overall, West’s Yeezy line accounted for as much as 8% of Adidas’s bottom line. No wonder it took them a week to break up with him.

We’re a long way from the days when a Kanye drop used to mean something else entirely, a deeply immersive sound collage from the vanguard of pop music’s new wave. After years of being typecast as a producer, albeit one who had a hand in Jay-Z’s seminal Blueprint album, West crossed over into emceeing in 2003 with The College Dropout – which didn’t just distinguish him from the gangsta rappers of the era, but made preppy style and nerd idolatry cool. Two years later he consolidated that break with Late Registration, a Billboard blockbuster that marked a sea change in pop music.

West may not have been gangsta in the 50 Cent mold, but he was tough in his own way. He had his own near-death moment, a 2002 car crash that shattered his jaw. During an emergency surgery, a metal plate was inserted into his chin and his jaw was wired shut – a fortunate outcome that nonetheless would disadvantage an aspiring rapper. But West used the experience, rapping about it over a sped-up Chaka Khan hit. That single, Through the Wire, became the lead single of The College Dropout and announced West as a talent who could not be deterred.

Before long West was a cultural giant – bigger than the rapper Common in Chicago, bigger than Russell Simmons at the Def Jam label, bigger than Diddy in business, bigger still than the late designer Virgil Abloh, a complicated relationship that inspired a South Park parody. And once West’s ego grew to size, well, it became impossible to feed. Interrupting Taylor Swift’s winning moment at the 2009 MTV video music awards, marrying Kardashian (the Marilyn Monroe to his Walt Disney, he once crowed), getting into bed with Donald Trump and moaning about slavery being “a choice” – none of it satisfied West. (The rapper has spoken publicly about having bipolar disorder. Medical experts have underscored that mental health struggles and bigotry are separate problems.)

And yet, astonishingly: he nearly survived every controversy until Adidas changed their number and things came to a head this month. Now, with just about all his collaborators gone, West isn’t just off Forbes’ billionaires list. He’s a toxic asset. Not even the rightwing pundit Candace Owens will have him on her show now – and West was supposed to buy the rightwing social network Parleroff her chief executive husband. Loyal fans who took West’s antics as judo moves to get out of his apparel brand deals surely must feel let down after hearing West made an unsolicited visit to Skechers’ LA offices and was shooed away. “I don’t think a board of directors in a million months of Sundays would ever allow a business to touch him again,” says Matt Baker, the chief strategy officer at the brand management firm Deutsch NY.

Where West’s rise beat the odds, his downfall beggars belief. No American icon has ever self-destructed so spectacularly – not the actors (Mel Gibson, Isaiah Washington), TV creepers (Matt Lauer, Bill O’Reilly), sports heroes (Michael Vick, Joe Paterno) or even the tabloid targets (Britney Spears, Lindsay Lohan). Even Roseanne Barr, who once dressed as Hitler and was finally written off her own TV reboot after a racist one-liner about former White House senior adviser Valerie Jarrett, didn’t have her fingers in as many pies as West – not only desperate for new partners, but a new divorce attorney, too. Camille Vasquez, the attorney who redeemed Johnny Depp, won’t touch West, either.

It’s only in recent days that West has trialed an apology on Lex Fridman’s podcast, another unoriginal version of the “if I offended” word salad. But it didn’t make things better for the students of his briefly shuttered Donda Academy, or vindicate his tarnishing of George Floyd – or stop him from spouting more offensive rhetoric. But with Ye’s billions reduced to millions and JP Morgan no longer willing to grant him loans against his net worth or otherwise engage the classic rich guy tax avoidance game, West might soon find the only entity willing to engage him is the IRS – and for them, Heartless is more than a West anthem. It’s modus operandi, too.

Kanye West had it all – wealth, power, status, autonomy. But in the end it wasn’t enough. There was no predicting it would come crashing down so dramatically. And yet there’s still no telling how much farther he could fall.