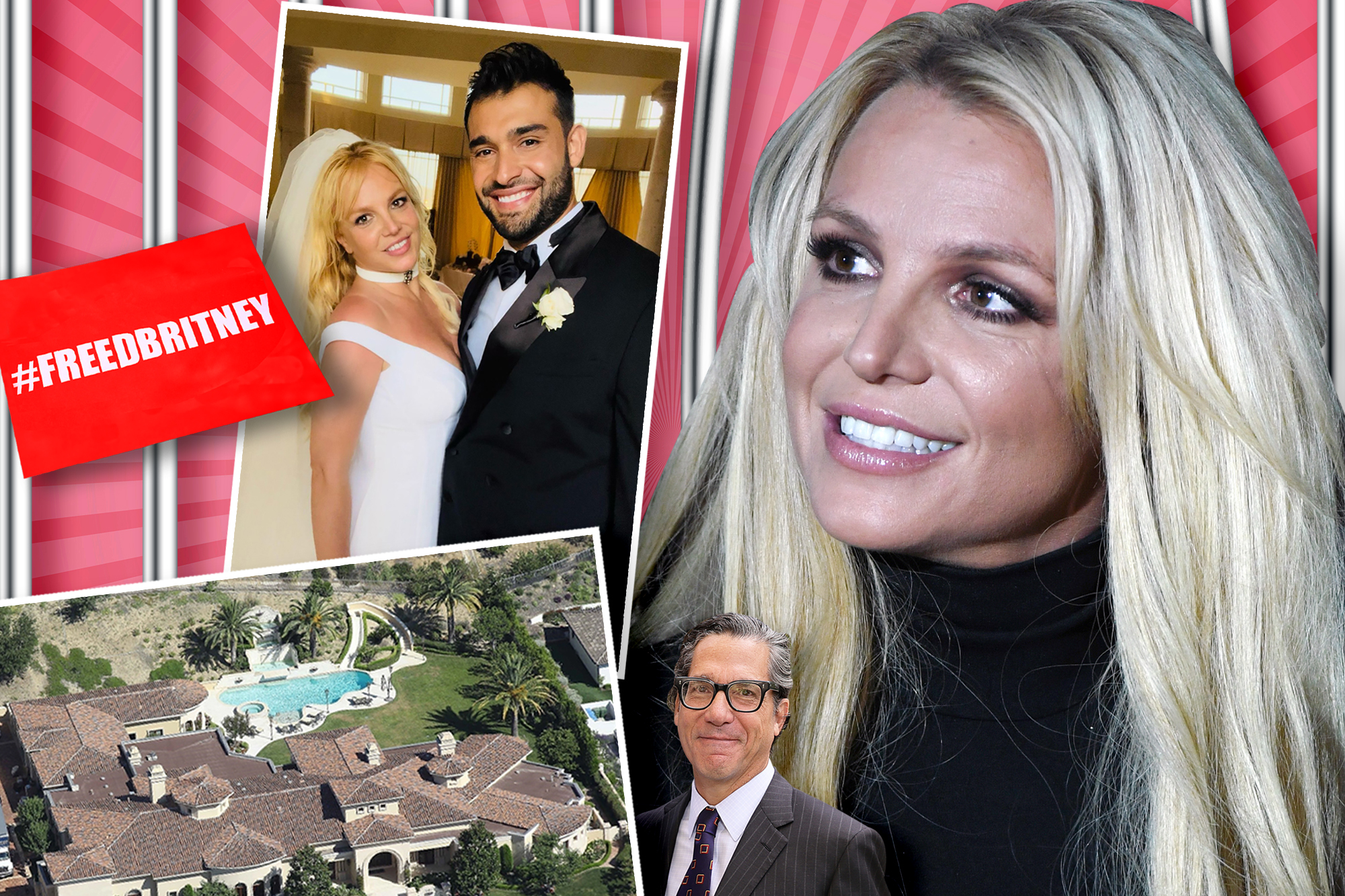 Britney Spears and Mathew Rosengart are an odd couple of sorts — an era-defining pop star and a resolute former federal prosecutor brought together by a common goal: to suspend Spears’ father as her conservator and then dissolve altogether the legal arrangement that dictated her life and money for nearly 14 years.

As Spears’ new husband, Sam Asghari, once put it, she and Rosengart have proven to be a “dream team,” one who in November 2021 saw through their holy grail and got a Los Angeles judge to set Spears free, just four months after she retained the high-powered attorney following the resignation of her court-appointed lawyer, Samuel D. Ingham III.

“This man has turned my life around,” Spears later wrote in an Instagram post thanking Rosengart “for being so kind and respectful.”

But the dynamic duo’s work is not done yet.

“Rosengart has no intention of backing down,” a source familiar with the situation tells Page Six exclusively. “Just because the conservatorship is over doesn’t mean he’s closing his briefcase and moving on.”

And neither is Spears, who has uploaded countless bloodthirsty missives about her family to her Instagram feed in recent months. She has unleashed on everyone from her father and former conservator, Jamie Spears (“My dad is not smart enough to ever think of a conservatorship”), and her mother, Lynne Spears (“She secretly ruined my life”), to her brother, Bryan Spears (“GO F–K YOURSELF”), and her sister, Jamie Lynn Spears (“You are scum”).

“After being silenced for 13 years, Britney is not afraid to expose anyone or anything,” a friend tells us. “She wants to share her truth, and her Instagram posts are just the tip of the iceberg.”

Page Six broke the news in February that Britney, 40, signed a $15 million contract with Simon & Schuster to write a tell-all memoir, one of the biggest deals in publishing history. She has since finished the book, but a release date has yet to be announced.

“Wait ‘til her memoir comes out. She’s been through more heartbreaking s–t than she’s let on,” the friend teases. “She worked hard on the book, but it wasn’t easy. A lot of old wounds reopened throughout the process, but it was also incredibly therapeutic. It’s going to be a juicy, eye-opening read.”

Britney has certainly been busy as of late. Just under a year after telling Judge Brenda Penny that she was “not able to get married or have a baby” under her dad’s strict rules, the “Toxic” singer wed Asghari, 28, in June. The couple have also tried starting a family together. Britney, who already shares sons Sean Preston, 16, and Jayden James, 15, with her ex-husband Kevin Federline, announced in April that she was pregnant, but she suffered a miscarriage in May.

The day after her wedding, Britney closed on an $11.8 million estate in Calabasas, Calif., an affluent neighborhood that Will Smith, Justin Bieber and the Kardashians call home. Britney’s new mansion, according to its listing, is tucked away in a “double-gated community” with “strict security,” a welcome safeguard in the wake of a harrowing violation at her previous house.

Just hours before Britney and Asghari walked down the aisle, her first husband, Jason Alexander, showed up to her home in Thousand Oaks, Calif., waltzed past security and stormed inside while allegedly armed with a knife. He brazenly declared on Instagram Live that he was there to “crash the wedding.”

Police promptly responded to the scene to arrest Alexander, 40, who was subsequently ordered to stay away from his 55-hour bride for three years. He was also hit with four charges including felony trespassing, the latter of which was dismissed when he pleaded no contest earlier this month.

Britney was so “shaken” by the breach, according to a source, that she fired and replaced her security guards with Rosengart’s help. However, several other professionals who worked for Britney throughout her conservatorship — and were therefore hired by Jamie — are still in the picture, which has raised concern among some fans who believe she should start with a clean slate.

Jeff Raymond has been Britney’s publicist for over a decade and counting, and digital marketing company CrowdSurf remains in charge of her social media postings. Her longtime friend Cade Hudson is also still on her team, although his current title is unclear; Hudson was Britney’s agent for years, but a recent Vogue story described him as her manager, a role previously held by Larry Rudolph, who quit in July 2021 after Britney said in court that her “management … should be in jail” for their “cruel tactics.”

“It wasn’t a complete bloodbath after the conservatorship ended,” the source familiar with the situation tells us. “Some people were let go or left on their own accord, while others stayed and new faces were brought on. A lot of people have failed Britney over the years, but not everyone around her is a bad egg.”

Those currently under the microscope include Jamie, whom Britney accused in court in June 2021 of a litany of abuses prior to his suspension as her conservator in September, as well as Lou Taylor, the business manager whose company, Tri Star Sports & Entertainment Group, Britney has vowed to “sue the s–t out of.”

Rosengart has additionally accused Jamie, 70, and Taylor, 56, of enriching themselves with the millions of dollars that his client earned from music sales, live performances and other lucrative ventures during her conservatorship, a type of guardianship typically reserved for the elderly, incapacitated people or those with disabilities.

Jamie and Taylor have both maintained their innocence and credited themselves with protecting Britney’s life and fortune as early as February 2008, when the conservatorship was established while the newly divorced Grammy winner was hospitalized on an involuntary psychiatric hold during a period of crippling media scrutiny.

But in July, Britney scored another big legal win when Penny ordered Jamie and Taylor, along with Taylor’s Tri Star associate Robin Greenhill, to sit for depositions and turn over any relevant documents in their possession.

Rosengart had attempted for months to schedule depositions with Jamie, Taylor and Greenhill, all of whom a former member of Britney’s security team, Alex Vlasov, alleged had secretly surveilled the “Gimme More” singer’s cellphone communications and bugged her bedroom with an audio-recording device. The embattled trio have repeatedly denied Vlasov’s bombshell accusations, which he made in the September 2021 New York Times documentary “Controlling Britney Spears.”

Nevertheless, the “writing is on the wall,” according to Britney’s friend, who notes to Page Six, “Alex said there are over 180 hours of recordings, so how can anyone deny their existence? It’s not like they’ve been deleted, never to be seen again.” (The Times reported that it also “reviewed the recordings to confirm their authenticity.”)

All of this led ardent supporters of the social media-led #FreeBritney movement to recently transform their hashtag to #JusticeForBritney, which trends on Twitter each time a post-conservatorship hearing takes place in downtown LA.

“The termination of the conservatorship wasn’t the end of #FreeBritney; it was a new starting point for Britney’s pursuit of justice,” “Eat, Pray, Britney” podcast co-hosts Jaclyn and Lisa tell Page Six. “There are still an enormous amount of unanswered questions, including whether those responsible for the conservatorship will be held accountable for what Britney experienced during those nearly 14 years. We hope the pressure and scrutiny stay on those involved until they are fully held responsible for what happened.”

The podcasters add, “Britney deserves to live her life to the fullest in whatever way that means for her, and we hope that she will receive vindication legally to help her move on to her next chapter.”

Until then, Britney has tried to find peace in familiar places, most recently the studio. Page Six exclusively revealed in July that she recorded a duet of “Tiny Dancer” with Elton John, which is set to be released in the coming days under the title “Hold Me Closer.”

“They’ve already played it for people at their record label, and everybody is freaking out. It is so good,” a source shared at the time. “They are saying this is going to be the song of the summer.”

Fans hoping for a total comeback will have to wait a while longer, however. Page Six hears that Britney, who last released an album in August 2016, does not have any immediate plans to record a full-length project or go back on the road, though she does get “the itch sometimes,” according to one source.

“A lot of Britney’s downtime these days consists of simply adjusting to this new chapter of her life,” the friend explains. “She wasn’t a free woman for over 13 years. Now, the sky’s the limit.”