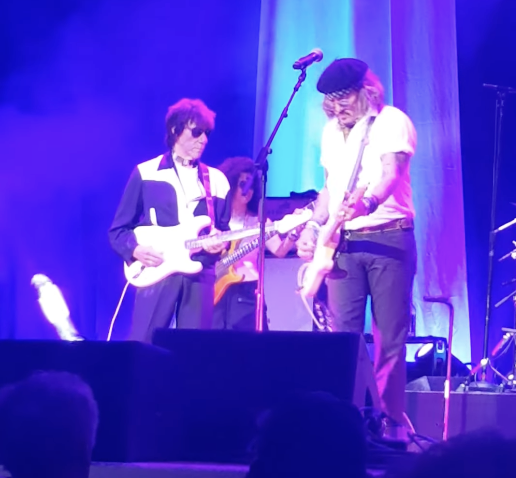 Johnny Depp made a surprise appearance in the English city of Sheffield on Sunday for a special performance alongside Jeff Beck who is currently touring in the U.K.

Depp and Beck rocked out to their 2020 collaboration “Isolation,” a remake of the John Lennon song released in 1970. The pair also performed covers of Marvin Gay’s “What’s Going On” and Jimi Hendrix’s “Little Wing.” There’s speculation Depp may also join Beck on his next two tour stops at London’s Royal Albert Hall on May 30 and 31.

Depp fans erupted with joy on social media seeing the passionate performers together again, as well as his newly dyed hair that’s much lighter than what he wore during his court appearances.

Before becoming an actor, Depp began his career as a musician. He formed the supergroup Hollywood Vampires with Alice Cooper and Joe Perry in 2015.

Depp is currently on a break from his high-profile court case against his ex-wife Amber Heard which is nearing its conclusion as the jury deliberates. Depp is suing Heard for defamation for $50 million in damages; his ex is countersuing for double that amount. The televised case has been ongoing since April 11 with a decision expected as early as Tuesday.

Check out videos of Depp and Beck’s performances below.