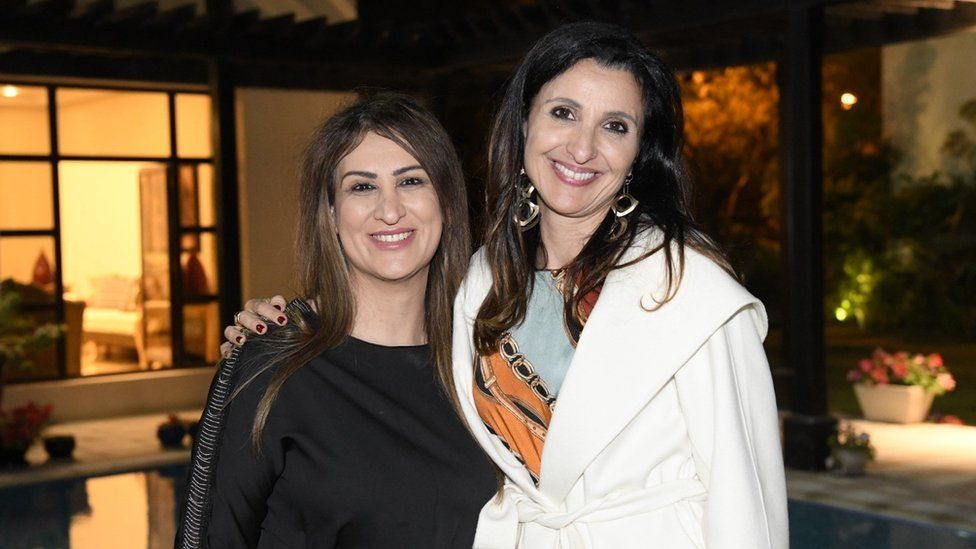 ‘Israeli women and their Gulf sisters are so similar’

Fleur Hassan-Nahoum describes the first meeting of the forum she co-founded as “how the sisterhood started”.

Ms Hassan-Nahoum, the Israeli deputy mayor of Jerusalem, is referring to the Gulf-Israel Women’s Forum.

It was set up back in the autumn of 2020, immediately following the signing of the historic, US-brokered Abraham Accords between Israel and the United Arab Emirates (UAE) and Bahrain.

Those agreements saw them become the first Gulf states to normalise relations with Israel and end a decades-old boycott of the Jewish state.

The agreements were signed at the White House in September 2020, and a month later Ms Hassan-Nahoum hosted the first meeting of the women’s forum, which was held in Dubai.

The idea behind the organisation is that Israeli and Gulf businesswomen and other female leaders can regularly meet to develop trade ties and friendships. Ms Hassan-Nahoum, who is also the boss of a PR company and a qualified lawyer, says “the underlying belief is that women are natural leaders and industry stalwarts”.

She admits that she was apprehensive before the first meeting, but that all went well. “I was very nervous about it, but it was apparent that we all want the same things – peace and prosperity in the region.

“Contrary to what others want us to believe, we are not enemies. If anything, Israelis and their sisters in the Gulf are so similar. We all came out of the first meeting giddy.”

The forum now has hundreds of members from a wide range of professions, and includes women from non Abraham Accords countries, such as Saudi Arabia and Egypt. Saudi Arabia still doesn’t have diplomatic relations with Israel, while Egypt signed a peace treaty with Israel in 1979, but is not a Gulf state.

The women meet up to eight times a year, either in person or via video conferencing.

Bahraini political commentator and former president of the Bahrain Journalists Association, Ahdeya Ahmed Al-Sayed, is a fellow member of the forum. She says that the while the organisation is helping to build “new alliances”, she admits that there is still much prejudice against Israel in the Gulf region.

“Whether they are political, military, security or economic cooperation and investments, in a changing world with a lot of economic and security challenges, and food security issues, we all need new alliances that help us face these issues,” she says. “And that’s what the Israeli-Bahraini relations is about.”

Yet she adds when she first voiced her backing for the Abraham Accords “the amount of hate, threats and online harassment was unbelievable”. “It shows that women will always be viewed as vulnerable, and anyone opposing them will attempt to break us with different opinions. But in my case it made me stronger.”

For UAE-based, US-expat Leah Tedrow, one key benefit of the forum is helping Israeli businesswomen learn the intricacies of working and securing deals in that Gulf country.

“Having local knowledge on the ground to guide you is incredibly important here, to ensure you don’t make any missteps that can have larger ramification,” says Ms Tedrow, who is boss of Dubai-based PR firm Evoke International.

“While the Western mindset is very transactional when it comes to business, here in the UAE it is about building and developing relationships.”

Ms Tedrow adds that if you are new to doing business in the UAE you have to take the time to build trust, and on a deep level. “Anyone who believes that they can just walk into the UAE and sign several contracts in as many days, is in for a rude awakening.”

Ms Tedrow was in fact involved in the first communications between Israeli and UAE political and business leaders ahead of the Abraham Accords. She describes listening into the first direct phone calls as “incredibly moving and exciting”.

“Then it was about addressing the rudimentary business challenges of creating banking channels to allow direct wire transfers between Israeli and UAE banking systems, and accepting Israeli bank and credit cards in the UAE and vice versa.

What the Horoscope Predicts for Each Zodiac Sign in 2021

“That was all resolved fairly quickly between the two, but it seemed the biggest challenge was letting the rest of the world know the two countries had even signed the Abraham Accords,” adds Ms Tedrow.

“We heard many instances where airlines in mainland Europe wouldn’t let Israeli passengers travel on direct flights to the UAE in the beginning because they had no idea the Accords had been signed and that travel was now allowed!”

As the Gulf-Israel Women’s Forum continues to meet, one study predicts that trade between Israel and the UAE will reach $2.5bn (£2bn) this year, rising to $5bn by 2027. The two nations signed a free-trade agreement back in March.

Israel and Bahrain are continuing talks to establish a similar deal between their two countries.

Yet while Israeli and Gulf businesswomen develop ties, Palestinian entrepreneur Maha AbuShusheh says that she and her compatriots are missing out.

“I feel like we are in a bubble and isolated from other Arab countries when it comes to business,” says the chief executive of Ramallah-based construction company AbuShusheh.

“It’s so hard doing business with them because we do not really have an open market with the world, our economy is suffering due to many things, such as uncertainty and no control of borders and resources.

“Yes we are sisters and friends with Arab nations… but it’s hard to have business relations with them, with or without the Abraham Accords. It didn’t make our life easier that’s for sure and I can’t even tell you of any positives for us.”

Next
Survivor 43 Episode 11 Recap: The Tide Is High