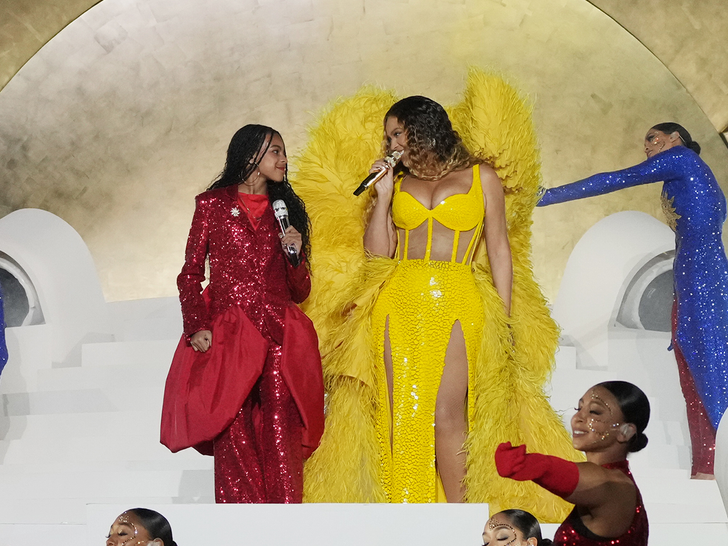 In brand-new Dubai performance photos, Beyonce proves that she is still the Queen Of Music

Share
Home
Celebrity
Beyoncé
In brand-new Dubai performance photos, Beyonce proves that she is still the Queen Of Music

Beyonce most certainly lived up to her nickname, “Queen Bey,” during her Dubai performance Saturday night … and we got the pics to prove it.

Check out these new images, showing Bey in a yellow sequined gown with a feathered cape — which was fit for a queen!!! She was surrounded by dancers in large red dresses and a Middle Eastern orchestra.

Bey then changed into a gold body suit with a matching corset and long train. She also wore a red dress with a different corset, stockings and gloves.

Safe to say … Bey brought the house down at the star-studded event … Kendall Jenner, Liam Payne and Ronan Keating were just a few of the celebs on hand.

Everyone got to enjoy Bey’s 90-minute set that included her biggest hits … “Crazy In Love,” “Naughty Girl”, “Halo” and “XO.” The show ended with a huge fireworks display.

Bey hit the stage at Atlantis The Royal hotel in the United Arab Emirates after an almost 5-year hiatus. The singer was paid a whopping $24 million to be the centerpiece of the hotel’s launch party. Recording devices were banned, but many in the packed crowd didn’t follow the rules and leaked footage of the event on social media.

A livestream showing The Atlantis resort cut off immediately as Beyoncé hit the stage. It’s possible Wi-Fi has been turned off, and signal blockers could be in use.#BeyonceInDubai pic.twitter.com/q21sqK9KWf

The concert was also a family affair … Jay-Z was present along with Bey’s parents, Tina and Mathew Knowles.

Bey/Jay’s 11-year-old daughter Blue Ivy, and 5-year-old twins, Rumi and Sir were there as well. Ivy even jumped on stage to perform a duet with her mom, singing a song from the album, “The Lion King: The Gift.”