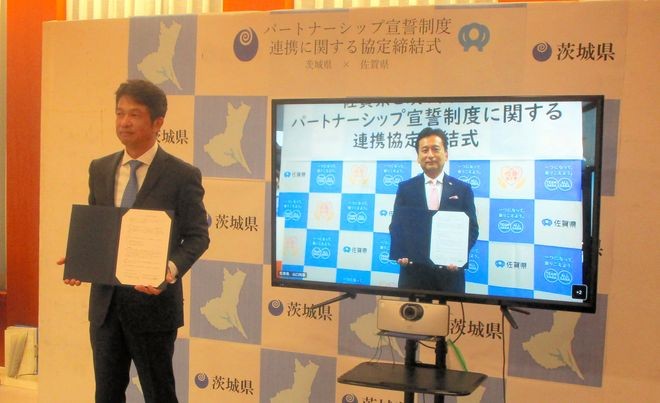 Ibaraki, Saga officials will help LGBT couples when they move

MITO–Ibaraki and Saga prefectures have reached an agreement to accept each other’s certification for same-sex couples as partners following their relocations to either prefecture.

“Many individuals will rely on the inter-prefecture partnership system, and this marks a major step forward,” said Yuri Namekawa, 35, a Mito city assembly member who had her same-sex partnership certified in Ibaraki Prefecture in 2019.

As the central government has not put a comprehensive framework into place, those in a same-sex partnership who move to a new area have to again show required documents to local governments in their new homes.

The agreement, signed on Aug. 18, is expected to allow sexual minorities to skip the procedure when they relocate between Ibaraki Prefecture and Saga Prefecture.

It marked the first time for prefectural governments to cooperate on their programs that recognize same-sex partnerships as equivalent to marriages between opposite sexes.

Preparing the required forms under the recognition system entails a lot of time and labor, Namekawa said.

The hope is to make life easier for gays, lesbians and other sexual minorities, since couples from those categories are often discriminated against, according to the human rights promotion division of Ibaraki Prefecture.

Pairs whose partnerships have been approved by either of the prefectures can also be briefed on their partners’ health conditions or give formal consent for their hospitalization and surgery as family members at medical centers.

They can also apply for living in public housing facilities. Couples may also be allowed to become life insurance beneficiaries or receive fee reductions offered to families under cellphone contracts in some cases.

Ibaraki Prefecture is also planning to form alliances with other local governments who have the same type of framework in the future.

In July 2019, Ibaraki became the first prefecture to have a civil partnership mechanism, under which same-sex couples can receive certificates if they submit a special form to the prefecture to declare they will jointly run a household on a continual basis.

Ibaraki Governor Kazuhiko Oigawa has since been calling on other prefectures to work together on the issue at National Governors’ Association conferences and on other occasions.

(This article was written by Haruhiro Hirahata and Shun Hayashi.)

Previous
377A: Singapore to end ban on gay sex