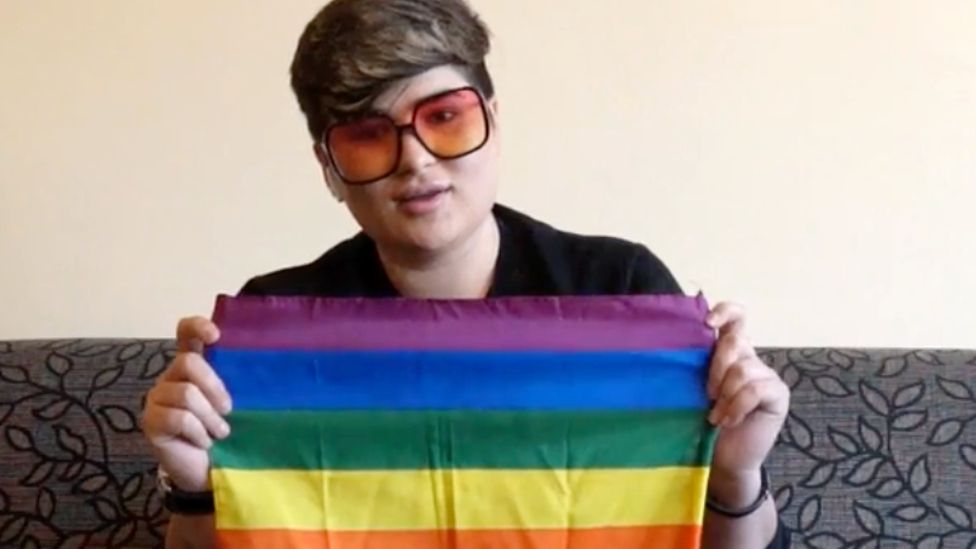 ‘I want to see the rainbow flag raised in Iran’

For the first time, two women known to have been lesbian have been sentenced to death in Iran. It marks a new stage in the Islamic republic’s persecution of LGBT people.

“My biggest hope in life is to raise the rainbow flag in Iran and shout this fact that we exist.”

So said Zahra Sadiqi Hamedani, also known as Sareh, talking to BBC Persian in May 2021.

Five months later she was arrested by Iran’s revolutionary guard. Now she has been tried and sentenced to death, at the age of 31, along with another woman, Elham Choubdar, 24.

The two women were friends and had a business relationship, as both sold beauty products.

Originally from the small city of Naqadeh, in north-western Iran, Sareh married young and had two children, a boy and a girl, before divorcing her husband and leaving Iran to live in Iraqi Kurdistan.

According to some reports, Elham Choubdar travelled regularly between the two countries.

Sareh was not a well-known LGBT activist but had an Instagram account that was popular among Iran’s Azeri and Kurdish minorities. She also talked occasionally to foreign TV crews about the situation of LGBT communities in both Iran and Iraqi Kurdistan.

“We are not corrupt; we are like you, like anyone else. I am trying to raise awareness, so others, including my children, know what freedom means. I want to empower others to have the choice [to come out].”

According to the Iranian authorities, Sareh was arrested near the border of Iran and Turkey, where she was planning on seeking asylum.

It is certainly possible that Sareh was planning on moving to Turkey, which has a large community of Iranian LGBT exiles. But if so, she could have travelled directly from Iraqi Kurdistan – there was no need to enter Iran – so it is unclear whether she went there voluntarily.

A friend of Sareh’s in the city of Urmia, also in north-western Iran, suggests that she could have gone to Iran to see her children.

“She kept talking about her kids. She missed her family, especially her brother. Maybe she wanted to meet them and then take the kids?” she told the BBC, admitting that this was a guess.

Sareh told the BBC in 2021 that her children were her “biggest concern”.

“I have gone through many terrible, torturous experiences in my life. I don’t want them to happen to my son or daughter. I’d do whatever it takes to protect my children, even if I had to sacrifice my life.”

The trial against the two women is said to have begun earlier this year. News of their conviction and sentencing first appeared on Sunday, and was confirmed on Monday.

The Mizan News agency, linked to Iran’s judiciary, said they had been found guilty of human trafficking and “corruption on Earth” – a sharia-law term that refers to anti-Islamic behaviour.

The trafficking accusation was first made on Iranian state television in November. A news report said that Sareh had been promoting offering young Iranian women higher education, jobs and better lives in Iraqi Kurdistan, but had instead sold them into slavery. It also said that she had been promoting illegal gambling and throwing LGBT parties.

No evidence was given for these accusations, however, and the human rights group Amnesty International has rejected them.

Amnesty described Sareh as a “gender-non-conforming human rights defender” who had been detained “solely in connection with her real or perceived sexual orientation and gender identity as well as her social media posts and statements in defence of [LGBT] rights”.

Although the Mizan news agency denied that Sareh and Elham Choubdar were prosecuted because of their activism, Iranian human rights groups have said they were accused of “spreading homosexuality”, “promoting Christianity”, and communicating with media hostile to the Islamic Republic.

The allegation about promotion of Christianity is said to have been made partly because Sareh has worn a necklace with a cross.

It’s quite normal for the Iranian authorities to prosecute gay men under bogus charges. Under Iranian law, sex between two men is punishable by death, but the authorities often charge people instead with offences such as rape, incest, or drug-trafficking.

One-Time Hookups Account for Half of MPV (Monkeypox) Cases

According to Iranian activists, at least four other people have been executed for being gay in the last 12 months, two of them as recently as June.

The use of the same tactic with two LGBT women marks a new departure. Sex between women is not punishable with the death sentence, but with up to 100 flogs.

“Iran was not always like this. We know before the 1979 Islamic revolution, many international LGBT figures, including Andy Warhol, travelled to Iran. There were rumours that the Shah’s favourite prime minister was a gay man,” says a lesbian from the capital, Tehran.

“But my generation has suffered a lot under the rule of the Islamic Republic. Since the news about Sareh came out, I deactivated all my social media accounts. I don’t want to get arrested and executed.”

Others who stayed online have been posting a photo of Sareh and trying to get a hashtag against the death sentence to trend.

Over the past few years, a vibrant underground LGBT movement has taken shape inside Iran, but this appears to have increased the authority’s hostility. Rainbow flags have been set on fire alongside the US and Israeli flags, and there have been reports of people being arrested for using LGBT dating apps.

Only a few days ago, the country’s hardline president Ebrahim Raissi referred to homosexuals using the highly offensive word and described homosexuality as “dirty behaviour” and “modern barbarism”.

According to Iranian law, both Zahra Sadiqi Hamedani and Elham Choubdar have the right to appeal to the Supreme Court but prospects of overturning the sentence are slim. The court has a reputation for approving the harshest sentences when it comes to charges which are considered as anti-Sharia law.

Sareh told the BBC she had faith that she would see the day when the rainbow flag was no longer burned in Iran. But this, like her hope to hold the flag aloft and shout about the existence of LGBT people, now seems destined to go unfulfilled.