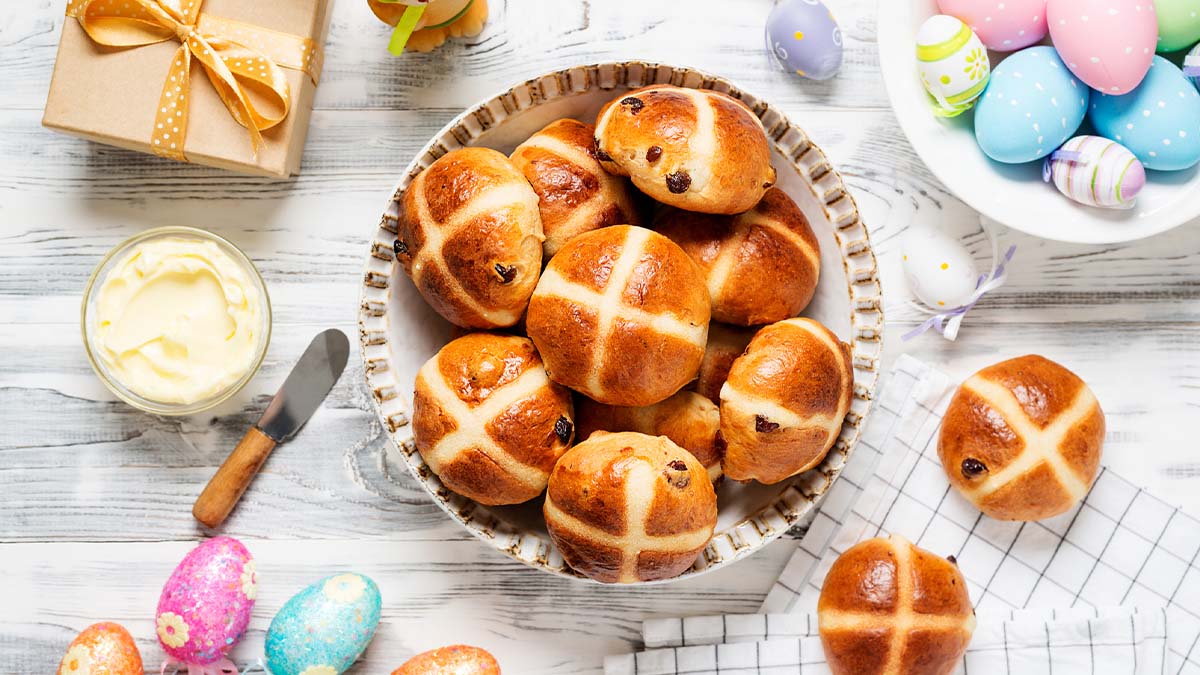 How to Make the Best Hot Cross Buns, Because It’s Not Good Friday Without Them

Share
Home
Food
How to Make the Best Hot Cross Buns, Because It’s Not Good Friday Without Them

It just wouldn’t be a traditional Easter weekend celebration without hot cross buns, would it? Sure, there are other must-haves for this spring holiday — baskets, the Easter bunny, pretty pastel dresses, even popular candies like jelly beans, Cadbury eggs, and Peeps. But hot cross buns are something special: A classic and time-honored treat that doesn’t beg for attention but somehow manages to complete your holiday feast.

In fact, some (and we include ourselves in this bunch) might say they’re a must, especially on Good Friday. But why?

How are hot cross buns made?

Most easy hot cross bun recipes (this one is our favorite) call for flour, eggs, yeast, sugar, butter, powdered milk, cinnamon, nutmeg, and dried currants (raisins, golden raisins, and other dried fruits, like apricots, are sometimes used a substitute). Other seasonings — such as cloves, lemon juice, fruit juice, or even rum — are sometimes added in.

Typically, the fruit and dough ingredients are kneaded together (using an electric mixer, a bread machine, or by hand) until the dough is soft and elastic. The dough then must sit, covered, to rise for one hour, covered.

The dough will become puffy and will grow in size. From there, dough is divided into small ball-sized pieces; a heaped muffin scoop (about 1/3 cup) makes about the right portion.

The balls (buns) are then given another chance to rise, are brushed with butter and egg, and will bake in the oven, usually at about 375 degrees Fahrenheit for 20 to 25 minutes or until golden brown. Once cool, icing (or pastry) crosses are put atop each bun.

Where did they originate?

As for where the hot cross bun tradition began, the St. Albans Cathedral in Hertfordshire, England offers one compelling theory. According to the popular legend, the hot cross bun is said to originate in St. Albans, where Brother Thomas Rocliffe, a 14th-century monk at St. Albans Abbey, developed an original recipe for the buns and distributed them to hungry, poor locals on Good Friday, starting in 1361.

Why eat them on Good Friday?

Hot cross buns are traditionally eaten on Good Friday in the British Isles, Australia, Canada, Ireland, New Zealand, South Africa, and some parts of the Americas. The buns mark the end of the 40 days of Lent.

The cross on top of the hot cross bun represents the crucifixion of Jesus and is meant to remind Christians of the cross on which Jesus was killed. In the United States, this cross is typically made from sugary frosting; in parts of Europe, the cross is made either by slashing the dough with a knife or by laying strips of pastry across the top of the bun.

There is more to the story of what hot cross buns represent. The spices inside of hot cross buns — usually nutmeg, cinnamon, and cloves — are meant to symbolize the spices used to embalm Jesus at his burial.

Sweet, rich hot cross buns are not the healthiest snack you’ll find at an Easter brunch spread. From the buttery bread to the candied fruit, warm spices, and icing, hot cross buns are more like miniature cakes — and each one will set you back anywhere from 150 to 300 calories, depending on the size of the bun and the exact ingredients used to create it. (And who can ever stop at just one hot cross bun? Certainly not us!)

Hot cross buns are typically loaded with refined carbohydrates, sugar, and saturated fat, so a dieter’s dream these Easter treats are not. That doesn’t mean you have to sacrifice enjoying this traditional Good Friday or Easter weekend sweet, however.

The healthiest way to eat hot cross buns is stick to small portion sizes — try to stop at one bun! — go easy on the butter and icing. Cooks can also try to use one or two fruit ingredients (think dried currants, dried apricots, or raisins) rather than more decadent fillings like chocolate chips, Nutella, extra butter, buttermilk, or brown sugar.

Though some types of bread are generally safe for your beloved pooch to consume, the question of whether hot cross buns are safe for dogs is a tricky one. In general, the answer is no — and that’s because of some of the ingredients in typical hot cross buns recipes.

“Hot cross buns in particular may be extremely dangerous to pets,” Jennifer Dean, an animal nutritionist with pet food brand Webbox Natural, told Metro.co.uk. “Raisins and sultanas found in the snacks can cause sudden kidney failure in dogs and cats. The precise reasons why are still not clear, but there’s a toxic agent in the fruit that can also lead to diarrhea, vomiting, and extreme lethargy.”

Another hot cross bun ingredient that can lead to trouble for your dog? Nutmeg.

“Some hot cross buns will also contain lots of nutmeg. Unfortunately that spice contains a compound called myristicin, which can poison dogs if consumed in large amounts — such as might happen if your pet were to raid your baked goods,” said Dean. “In extreme cases dogs can experience hallucinations, increased heart rate and blood pressure, dry mouth, abdominal pain, and even seizures.”

Yikes! Sounds like we’ll be keeping Fido out of the kitchen this Good Friday — because there’s no way we’d miss this delectable springtime treat ourselves. 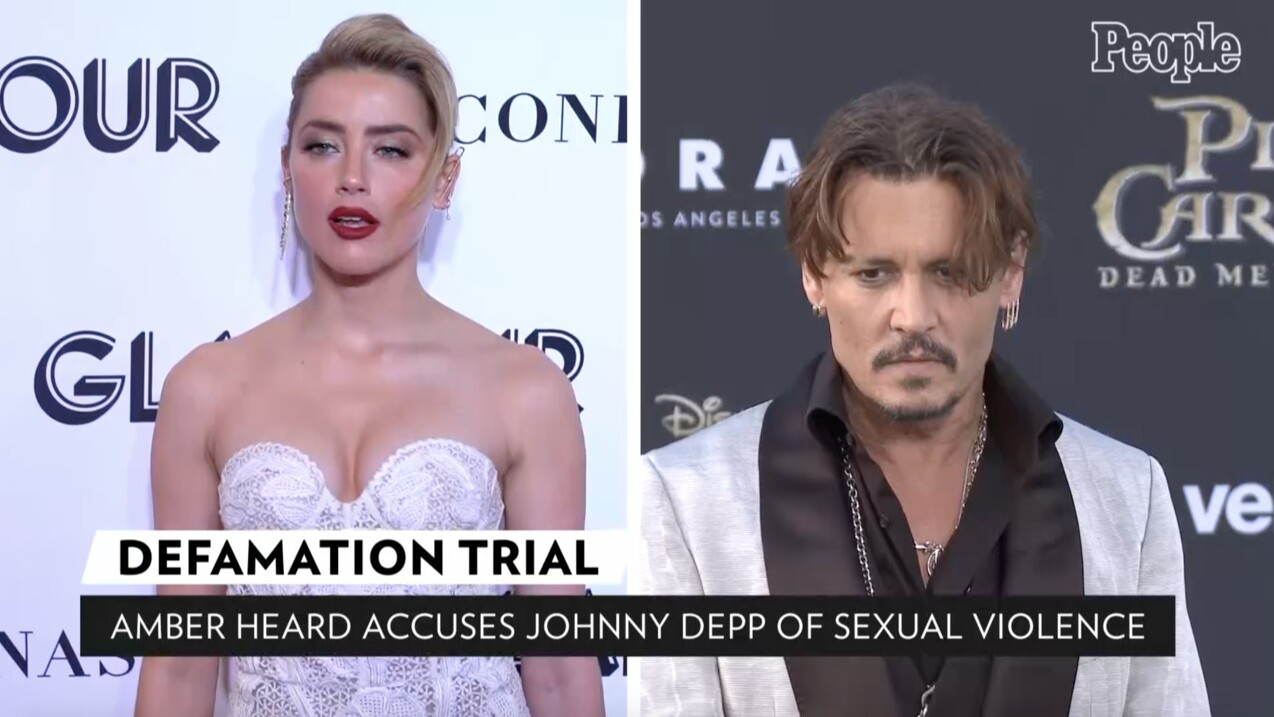 Previous
Johnny Depp Struggled to Detoxify from Drugs During Amber Heard Relationship, His Doctor Testifies
Next
This Ukrainian Skincare Influencer Now Uses Her Platform To Tell The World About The Impact Of War