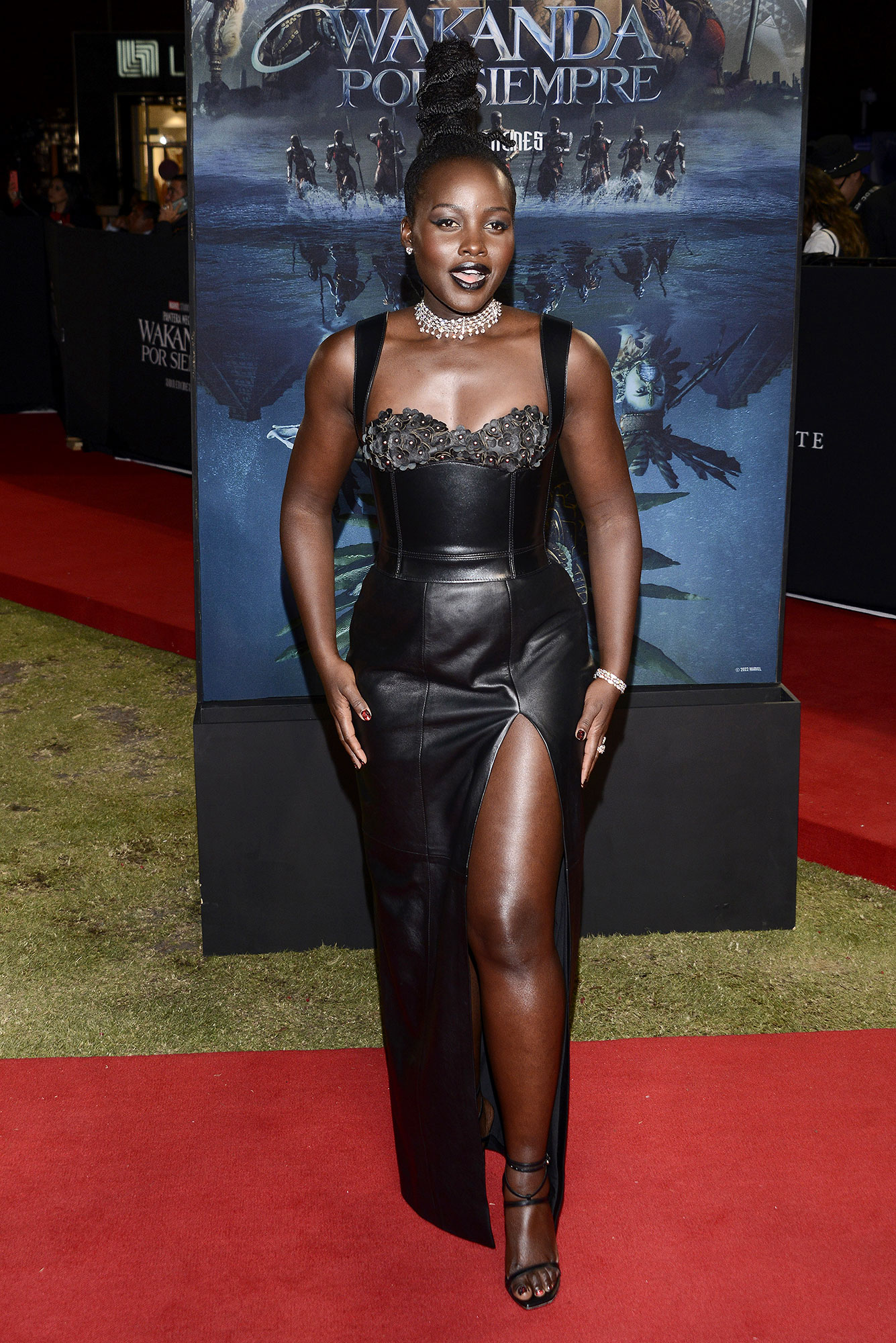 All eyes on Lupita Nyong’o! The actress has dazzled Us with a number of jaw-dropping looks while celebrating the release of Black Panther: Wakanda Forever.

For the film’s Los Angeles premiere on October 26, Nyong’o, 39, who portrays Nakia in the Marvel movie, showed off her curves in a two-piece set by Balmain. The all-white ensemble featured a one-shoulder cropped top that boasted a tiny cutout below her cleavage. The look was paired with a coordinating skirt that was equipped with cascading openings and a rope-like detail at the center.

The Us star added to her outfit by having her hair styled in a crown-like updo that was reminiscent of a work of art. She accessorized with a cowrie headband — a popular symbol in African culture that is meant to represent good luck. The action movie is largely set in Africa, in the fictional nation of Wakanda.

Eye-catching hairstyles were a theme for Nyong’o during the film’s press tour. At a New York screening of Wakanda Forever on November 1, she drew attention to her locks as they were pulled back into a spiky top bun. The bold hairdo perfectly complemented her teal Dolce & Gabbana mini dress — the same color as Nakia’s suit in the superhero sequel. The short frock hugged the Oscar winner’s figure and was designed with a bustier construction and a flirty thigh slit. Nyong’o gave the getup a monochrome finish by pairing it with blue-green scrunch boots and a matching mini bag. Her glam was also standout as she rocked a striking metallic look.

At the London premiere, Nyong’o looked like royalty. That night, the 12 Years A Slave actress tapped Alexander McQueen, stepping out in a ruffled creation by the fashion house. The high-neck look included a contrasting gold and black pattern with a tiered skirt. She teamed the gown with dangling earrings and a halo-esque hair design, a nod to her character’s iconic ring blades.

Each red carpet masterpiece was brought to life in collaboration with Nyong’o’s longtime stylist Micaela Erlanger.

The style guru opened up about working with the Emmy holder to Variety in 2019. “With Lupita, we always like to have a narrative and tell a story through the fashion choices … it’s not wearing a costume, it’s about promoting your work and having fun with it,” Erlanger told the publication.

While at the November 9 event, the Star Wars actress ditched the red design, unveiling a sexy black leather corset dress on the red carpet.

At the Mexico City premiere, Nyong’o lit up the room in a red coat dress by Jonathan Cohen that featured princess sleeves and a long train. The actress complemented the look with a diamond choker and a towering bun hairstyle.

For the Wakanda Forever premiere in Nigeria, Nyong’o’s curves looked unreal in a sparkly Vivienne Westwood dress that draped her body. She paired the number with pumps by Betsey Johnson.

Her glam was warm thanks to a striking highlight and rosy blush. The actress also sported metallic eyeshadow and goddess locks that were styled into pointed pigtails.

Fit for a Queen

At the London premiere, the Little Monsters actress donned an Alexander McQueen gown that was finished with a gold layered skirt.

Nyong’o’s halo-like mane was a moment all by itself.

She rocked a head-to-toe teal look by Dolce & Gabbana at a screening of the film in New York.

The 355 actress sported a Balmain two-piece set at the Los Angeles premiere.

Her cowrie headband paid homage to the film’s African roots.

Next
Khloe Kardashian Reveals Why She’s Glad to Not Have ‘Massive’ Breasts After Implant Plans: ‘Thank Goodness’