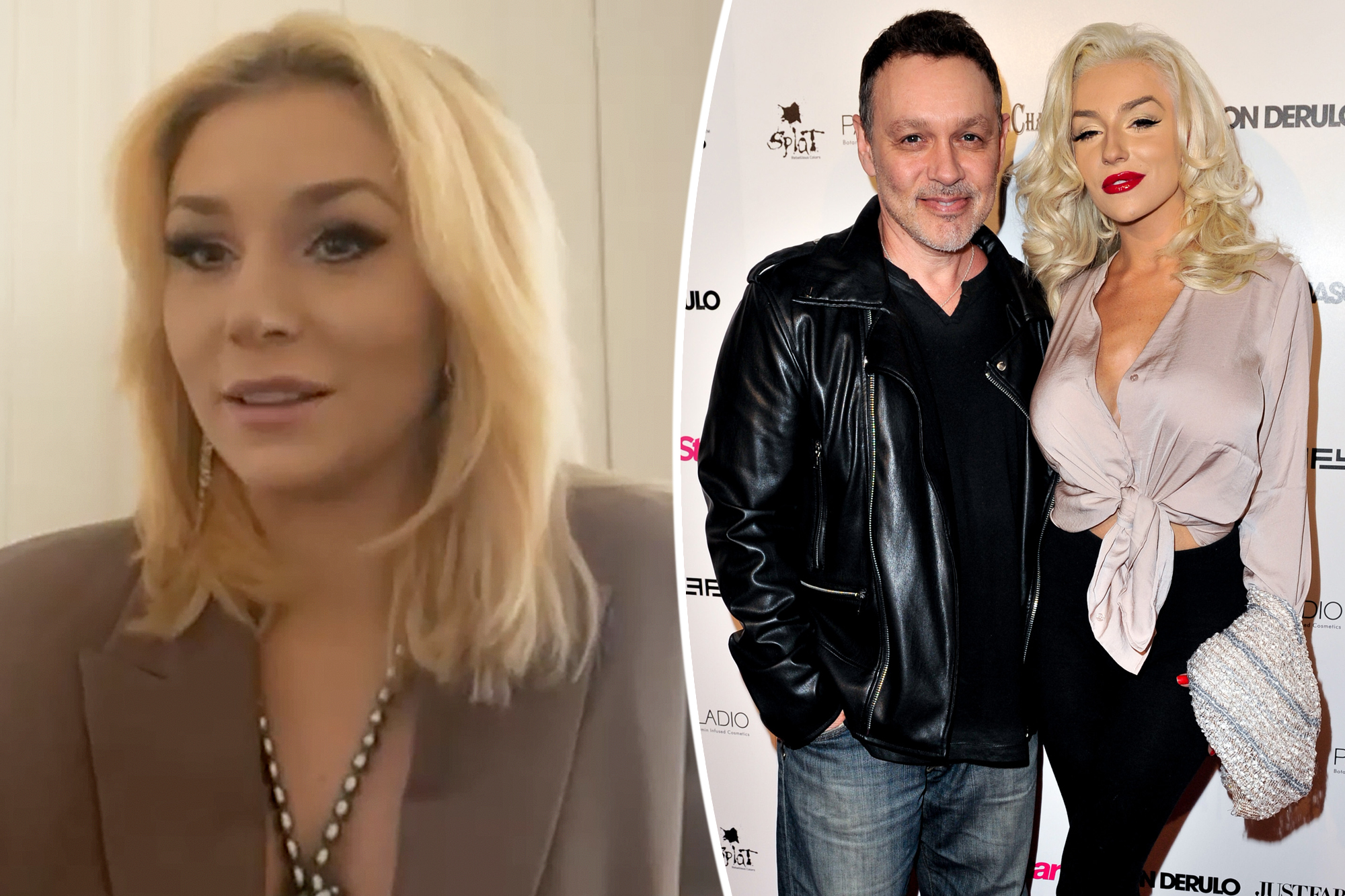 Courtney Stodden says their marriage to Doug Hutchinson felt like a “conservatorship.”

“I was married into a conservatorship, that’s how it completely felt,” the 27-year-old tells Page Six in an exclusive interview, reflecting on their nearly decade-long union with their ex-husband.

Stodden, who identifies as non-binary and uses they/them pronouns, claims that the actor, 61, domineered over their finances and personal whereabouts, oftentimes allegedly exerting his control through physical reinforcements.

“I would always have to have him with me. If you notice photos from the past, you can see he always has his arm here on my arm and I just always felt even physically shackled,” the reality TV personality claims.

Stodden became a tabloid fixture in 2011 after tying the knot with Hutchison at age 16 in a rushed Las Vegas ceremony. The marriage got the green light from Stodden’s parents, who Stodden feels succumbed to the actor’s “grooming” tactics. (“Grooming” is defined by the American Bar Association as a method “that involves building trust with a child and the adults around a child in an effort to gain access to” them.)

At the time of the wedding, the Tacoma, Wash., native — then just a teen with dreams of making it in the music industry — was mercilessly slut-shamed by the public, press and even beloved celebs of the era.

While Chrissy Teigen and Jason Biggs were sending Stodden threatening messages via social media and Anderson Cooper was mocking them on CNN, the Hollywood ingenue was quietly navigating the early stages of a “scary” marriage that they felt lured into by a man they believe to be a “predator” and “pedophile.”

“I didn’t have my own credit card. I couldn’t go anywhere and buy something by myself without permission from [Hutchison],” Stodden claims, adding that the paparazzi attention they received after relocating to Los Angeles only made them feel more helpless in the confines of their new life.

“It was really difficult to live in that,” they add, “not being able to just be free.”

Stodden claims they tried to split from Hutchison twice before ultimately filing for divorce in March 2018. The “Celebrity Big Brother UK” alum — whose marriage was legally dissolved in January 2020 after a “debilitating” back-and-forth — found it difficult to depart from the “Green Mile” star after alleging that they were sexually assaulted by multiple men during their separation.

“I tried to leave and I was assaulted,” they say, claiming that Hutchison coldly pinned the attacks on their attempt at breaking free. “It was this shackle where, [I thought], ‘Oh my gosh, this is my safe box and I have to stay in that box, I need to stay there. I am safer being controlled in this environment.’”

In that way, Stodden says, their marriage to Hutchison “was this emotional and physical reflection of a conservatorship.”

A rep for Hutchison did not immediately respond to Page Six’s request for comment.

The “Pleasure” singer began thinking about their relationship with Hutchison as a restrictive legal arrangement after watching the #FreeBritney movement mobilize to liberate Britney Spears from her controversial conservatorship over the last several years.

“I just watched ‘Britney Vs. Spears’ on Netflix and it was really emotional for me. I saw so many paparazzi that I recognized [who had] stalked me, just in the footage,” Stodden says. “And just the freaking feeling of not having your own life and your own rights and feeling trapped, I connected with that.”

The pop superstar’s estranged father, Jamie Spears, established the conservatorship in 2008 to control Britney’s personal, medical and financial affairs. Months before Britney was released in November 2021, she claimed in an explosive court testimony that she was stripped of such privileges as driving a car by herself or simply enjoying a cup of coffee throughout the lengthy ordeal.

Arguably more shocking, though, the Grammy winner alleged that, under Jamie’s control, she was browbeaten into a mental health facility, forced to take lithium and forced to have an IUD contraceptive inserted, all against her will.

“My heart just goes out to her so much because you see her on her Instagram and she’s popping off over chocolate. She’s so excited to eat chocolate,” Stodden observes. “She’s just doing so well and for somebody who’s been through so many world tours and just under so much control, I have so much respect for her.”

Like Britney, Stodden is currently unpacking their trauma as they write a forthcoming memoir.

“I’m working through it while I’m going through the book process,” they say. “Writing a book is interesting because you think you know what you’re going to write and then you hit something and you’re like, ‘Oh my gosh, that exists in me and that’s something I’ve been hiding from.’”

The cathartic process of penning a tome has made way for internal healing, Stodden says, as have the cultural reassessments of stories like theirs and Britney’s; both were sexualized at a young age and then felt controlled by men for extended periods before ascending to freedom.

“I am overwhelmed by the [support I have today],” they elaborate. “It’s such a contrast by how I was treated and I’m just starting to see that change.”

No lounger bound to the restraints of a marriage that they have alleged was “abusive,” Stodden — who is now engaged to entrepreneur Chris Sheng — is working on getting their driver’s license, studying for the California real estate exam and learning to manage their own money.

On the creative side, Stodden is recording more music that they hope empowers people who have endured similar struggles.

“I’m really excited to start taking my career in a direction that reflects where I am now and I think where society is now which is empowering for females,” says the artist, whose most recent single, “Boy Destroyer,” features lyrics that challenge patriarchal ideology.

Next
Should You Trust Beauty Counter? Here is What To Consider