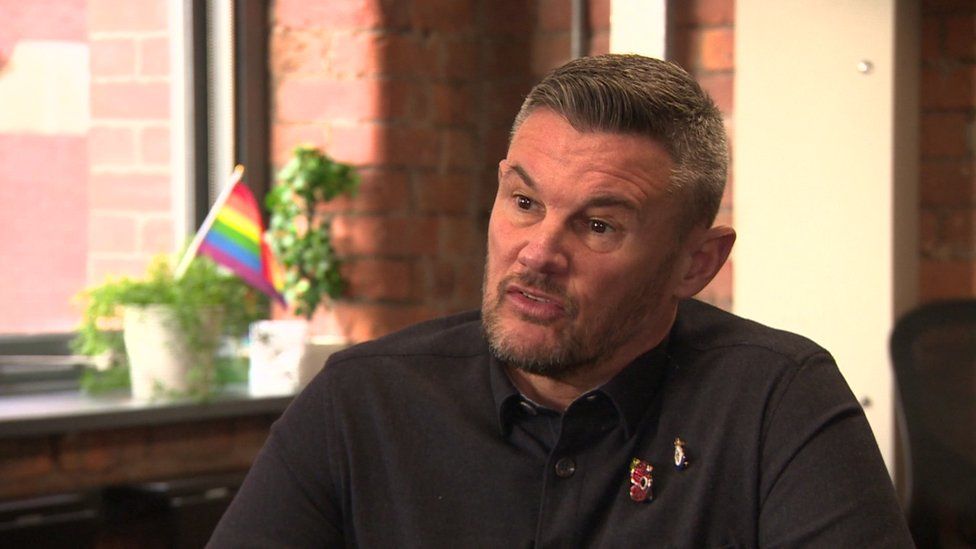 Call for LGBT veterans to share their stories with review

A former military fireman who was Manchester’s first openly gay Lord Mayor is urging LGBT veterans to take part in a review on the ban on homosexuality in the armed forces.

Carl Austin-Behan was expelled from the Royal Air Force in 1997 because of his sexuality.

He was escorted off base by military police and “lost everything” he had worked for.

He said he was “proud” to lay a wreath in Manchester on Remembrance Sunday.

Until 2000 it was illegal to be gay in the British military – a rule that is thought to have affected about 5,000 people in the armed forces.

Ahead of Remembrance Sunday, Mr Austin-Behan said it was important to get evidence to support the review, which is examining the impact of the ban on homosexuality in the military.

He joined up in 1991 but six years later was dismissed.

“They called me in and just asked me… ‘do you have homosexual tendencies’,” he said.

He recalled “bursting into tears” and was later told his “services were no longer required” and that he could face military prison.

Mr Austin-Behan said “My whole life just changed that minute, losing my career… my house, losing my friends and everything I’d been doing for the last six years.

“I remember driving outside the camp gates and sitting there for three hours and just crying.”

Everything You Need To Know About Britney Spears’ Fiancé Sam Asghari

Launched as part of the government’s Veterans’ Strategy Action Plan, the independent review will cover the period from the 1967 decriminalisation of homosexual acts in England and Wales to the lifting of the military ban in 2000.

Hirendra Patel, from Manchester LGBT Foundation, said: “The review’s going to be important in terms of finally acknowledging some of those injustices and some of those horrific stories are finally going to be documented so we can really look into the history of that.”

He added that he hoped that the armed forces would be “much more inclusive going forward”.

Campaigners have been seeking compensation for lost livelihoods, restoration of pensions removed for those who underwent dishonourable discharge and mental health support.

The deadline for submissions of evidence is 1 December.