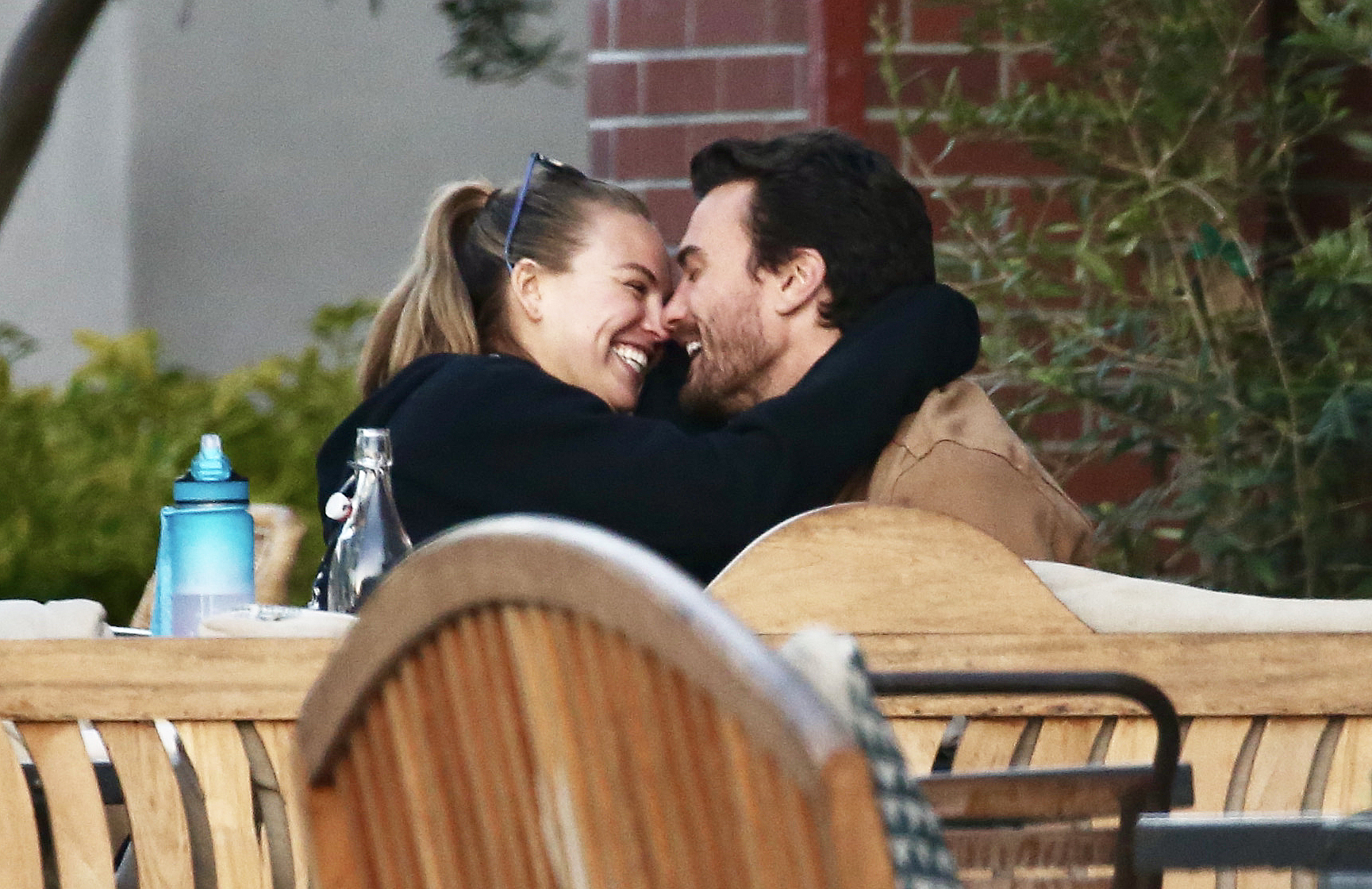 Coming up roses! Hannah Brown may not have found love on The Bachelorette, but her relationship with Adam Woolard has fans rooting for their happily ever after.

The former Bachelorette, who looked for love on season 15 of the ABC show, which aired in 2019, was first linked to Woolard in January 2021 after eagle-eyed fans identified him as the mystery man from her Nashville photos the same month.

The duo were spotted holding hands days later in Los Angeles, but they didn’t confirm the relationship until Valentine’s Day the following month.

Brown’s friend and fellow Bachelor Nation star Matt James did, however, comment on the budding romance in early February 2021, telling Entertainment Tonight that he had met the model already.

After posting photos with each other on the February holiday, the couple became more public about their romance. In March 2021, the Dancing With the Stars winner did a Q&A on her YouTube channel where she detailed different parts of her and Woolard’s life together.

“Life tends to assume a flow state when values and purpose are aligned 💙💫,” Woolard wrote via Instagram the same month, alongside a photo of the duo on a romantic beach date.

The following month, a source exclusively told Us Weekly that the relationship is “blossoming” and shows signs of turning into “something serious.”

The insider noted that Brown is “really excited” about her new man, especially because “their lifestyles are very similar.” Woolard feels the same way, according to the source, who told Us, “He even posted about ‘values and purpose’ aligning, and you can tell he’s just as happy having her in his life.”

The former pageant queen’s parents also “adore” Woolard and think he is a “great match for her,” the insider added.

As the romance has progressed the couple haven’t been shy about their feelings for one another. When Brown launched her clothing collaboration with L.A.-based line Show Me Your Mumu in May 2021, her boyfriend was quick to congratulate her.

“Many have seen you shine on TV, but few get to see how hard you work,” he gushed in an Instagram post at the time. “How thoughtful you are … and how you care for others … every single day.”

The same month, the southern belle wished Woolard a happy birthday, sharing videos of them dancing together throughout their relationship.

“You radiate goodness, positivity, and joy. I’m so thankful to be surrounded by your shine,” she captioned the clip.

After the former Bachelor contestant, who appeared on Colton Underwood’s season in 2019, shared a photo of an unnamed man’s feet on a date in Nashville in January 2021, Bachelor Nation speculated that it was Woolard. Days later, the pair were spotted getting cozy and holding hands in Los Angeles.

A source exclusively told Us in January 2021 that the rumored couple “seem like a great match” due to their similar interests. The insider added that it “seems like they’re taking things slow” for now, noting Woolard lives a “more private” life than Brown.

The lovebirds became Instagram official in February 2021. “Happy Valentine’s Day @admandew,” Brown wrote via her Instagram Story at the time, adding a heart emoji alongside a photo of the pair kissing on horseback. Woolard, for his part, posted a cuddling photo with Brown on the love holiday, captioning it, “My sweetie♥️.”

The Alabama native starred alongside her man in country singer Jordan Davis’ music video for “Almost Maybes,” which premiered in February 2021. In the video, Woolard proposes to Brown during a romantic meal.

The former Bachelorette dished about her first date with Woolard during a YouTube video posted on her channel in March 2021. “He asked me out and it was a Mexican restaurant called Chulita,” she recalled. “We had margaritas.” Brown also shared Woolard’s first impression of her with her viewers, revealing that he was “Effortlessly beautiful and vibrant and a little frantic, but so beautiful. Instant spark.”

Brown and Woolard played a game of “Never Have I Ever” on her YouTube channel in May 2021. They showed off their playful relationship revealing whether they’ve ever snooped in each other’s phones and whether they’ve slid into someone’s DMs. Woolard has also helped Brown pick out outfits on her channel and put on makeup.

When the TV personality’s clothing collaboration with Show Me Your Mumu launched in May 2021, her boyfriend was right by her side. The duo modeled the new outfits together in a promo shoot and cute campaign video.

“Many have seen you shine on TV, but few get to see how hard you work … how thoughtful you are … and how you care for others … every single day 😎,” Woolard wrote via Instagram after of the release. “Cannot wait for this collab to drop!! @hannahbrown x @showmeyourmumu – the perfect match.”

“Happy Birthday, @admandew. It’s so fun celebrating you! You radiate goodness, positivity, and joy,” Brown wrote via Instagram in May 2021 alongside a video montage for Woolard’s birthday. “I’m so thankful to be surrounded by your shine. You’re my sweetie💙. Let’s keep dancing, k?” The couple spent the weekend toasting Woolard on the beach in L.A. with friends.

The couple headed to Nashville in June 2021 to celebrate Woolard’s twin nephews’ first birthdays. The duo posed with the birthday boys after Brown hung out with the model’s two brothers, Alex and Austin.

Call to Prayer and Emergency Appeal for Ukraine

“Adam appreciation post 💙 Just feeling especially blessed today to have you by my side,” the TV personality wrote alongside a series of beach photos via Instagram in June 2021. “Thank you for everything you do for me. I’m one lucky girl.”

Brown shared an adorable video of herself dancing at home with Woolard, soundtracked to “Glad You Exist” by Dan + Shay. “I’m glad you exist,” she wrote via Instagram. In the comments section, the model replied, “Easy like … 💙.”

The southern belle and her boyfriend showed off their dance moves via Instagram while asking Brown’s followers a series of questions. “Is he hot or does he just know how to cook?” Brown pondered while shaking it for the camera. “Is she hot or does she just have a southern accent?” Woolard joked as he snapped from side to side.

“Happy birthday, Sweetie!! If you’re smiling, it’s because of YOU,” he gushed. “You’ve created such an amazing life… so happy to be a part of it. Excited for what this next year will bring 💙.”

She responded in the comments section, “I love you! You are my favorite wish come true💙.”

When Brown’s book, God Bless This Mess: Learning to Live and Love Through Life’s Best (and Worst) Moments, debuted, Woolard eagerly supported the project. “GOD BLESS THIS MESS IS OUT TODAY!!!” he wrote via Instagram. “So proud of you @hannahbrown … I saw the grind firsthand. You deserve it all.”

In the comments of the post, the newly minted author replied, “I love you so freakin much! Thank you my sweetie!”

The twosome took their romance to New York City for early Christmas celebrations, which included ice skating at Rockefeller Center and tickets to the Radio City Rockettes.

Previous
Celebrities Who Are Obsessed With Their Cats: Taylor Swift, Kate Beckinsale and More

Next
Not Sure What to Watch Next? Here’s What Our Editors Are Binge-Watching Right Now