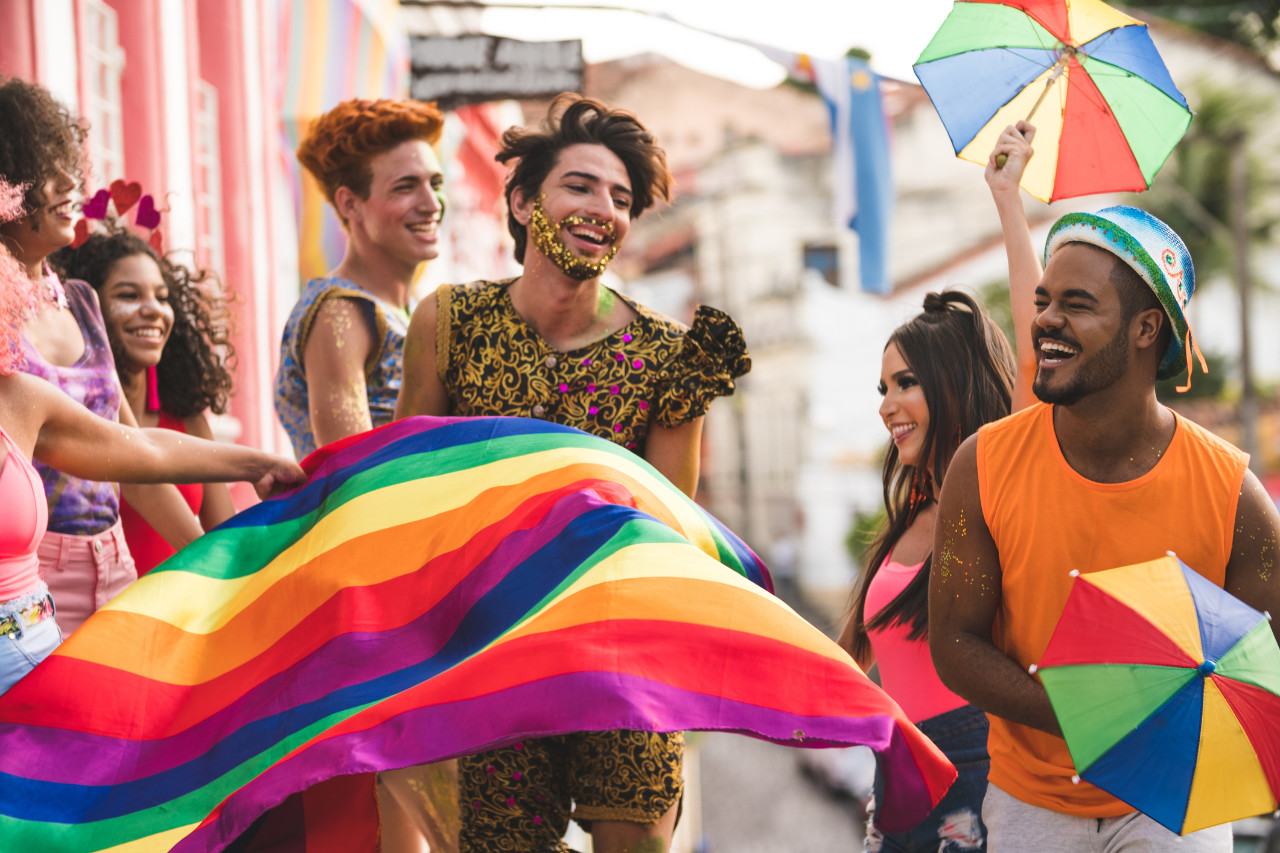 More than 150 anti-LGBTQ bills have either been pre-filed or introduced across 23 states so far in 2023, according to nonprofit organization The Trevor Project.

These policies themselves — and the dangerous rhetoric that surrounds them — are taking a toll on LGBTQ youth across the country.

In a recent poll, The Trevor Project sheds light on how these proposals and legislation that directly target LGBTQ youth are having a tangible effect.

Among the findings, 86% of transgender and nonbinary youth report that debates around anti-trans bills, specifically, have had negative effects on their mental health.

Due to 2022 debates that swirled around these policies, and fears over what will happen if they are enacted, 45% of transgender youth reported experiencing cyberbullying, while nearly 1 in 3 reported “not feeling safe to go to the doctor or hospital when they were sick or injured,” according to the poll.

These data are just a snapshot of the wider picture of how anti-LGBTQ legislation and rhetoric are filtering from political forums through tv and laptop screens and directly into the day-to-day lives of queer young people in the United States.

“The bulk of these harmful bills target transgender and nonbinary youth in particular,” said Kasey Suffredini, VP of Advocacy and Government Affairs at The Trevor Project. “These youth continue to hear dangerous rhetoric that distorts who they are and puts their personal welfare up for public debate. That can have an especially damaging impact on their mental health and sense of self.”

The poll sheds light on the reality of being an LGBTQ adolescent or young adult against the backdrop of potentially damaging and discriminatory legislation, and experts say, offers a glimpse at how we can best help and support our nation’s LGBTQ young people.

How anti-LGBTQ legislation is impacting youth

This new poll was conducted by Morning Consult between October 23 and November 2, 2022. It took a national sample of 716 LGBTQ young people who were between 13 and 24 years old. The poll also examined the emotional responses these young people had to anti-LGBTQ policies in addition to registering the modern social issues that are predominantly causing stress and anxiety among LGBTQ youth.

The poll revealed that 71% of LGBTQ youth overall reported that state laws that restrict the rights of LGBTQ young people “have negatively impacted their mental health.”

Zeroing in further, the number is 86% for trans and nonbinary young people.

Additionally, 75% of LGBTQ youth, which includes 82% of trans and nonbinary youth, reported that “threats of violence against LGBTQ spaces” (think Pride events, drag shows, community centers, and even hospitals and clinics) that primarily serve transgender people give them stress or anxiety.

The poll shows that 48% of these LGBTQ young people reported that this gave them stress or anxiety “very often.”

When asked how big of a challenge it is for a young person to no longer feel like their safe spaces are no longer, well, safe, Suffredini told Healthline that it can be a major challenge.

“The Trevor Project’s research has consistently shown that access to safe and affirming spaces can be life-saving for LGBTQ young people. Many of the anti-LGBTQ bills that are being considered in state legislatures right now directly aim to eliminate those spaces and supports for the young people just when they may need them most,” he said. “We urge lawmakers to support LGBTQ youth in their communities and increase access to affirming spaces, not restrict it further.”

These policies and the discussions and debates they generate have had a negative cascade in these young people’s lives.

The poll found that:

In addition to this, 1 in 3 LGBTQ youth overall said they experienced online harassment and cyberbullying, 1 in 4 said they stopped speaking to a family member or a relative, and 1 in 5 reported bullying overall.

When asked how simply seeing information about these anti-LGBTQ bills can have on a queer person, Heather Zayde, LCSW, a Brooklyn-based clinical social worker and psychotherapist, told Healthline that this isn’t unique to teens and young adults.

It can have “a detrimental effect on people of all ages,” she said.

“When there is an attempt to criminalize such integral and basic needs like using the bathroom, having romantic relationships, or getting appropriate identification documents it sends the message that LGBTQ people are wrong for simply existing,” said Zayde, who is unaffiliated with the new poll.

“The impact on health and well-being can be staggering. People can develop symptoms of anxiety and depression or have issues with eating and sleeping because of the fear that comes with not knowing if one’s rights will be taken away,” Zayde added.

An analysis of the policies themselves is troubling. The Trevor Project reported that a record of over 220 anti-LGBTQ bills were introduced last year. Most of them targeted transgender people.

The Trevor Project specifically highlighted how American schools have become a particular landmine for LGBTQ young people right now, with many of the proposals and legislation filtering directly into the classroom and schoolyards.

The poll shows that policies that would require schools to tell a student’s guardian or parent “if they request to use a different name/pronoun, or if they identify as LGBTQ” while at school made 67% of trans and nonbinary young people feel angry.

When it comes to policies and proposals aimed at banning books in school libraries that discuss LGBTQ topics, 66% (which includes 80% of trans and nonbinary youth) reported feeling angry.

The poll also shows that almost half of all LGBTQ young people overall, and 54% of trans youth specifically, felt sad about bans on these books.

“Unfortunately, instead of being places for learning and exploration, schools have increasingly become places of censorship and exclusion. This poll found that policies around topics such as respecting students’ identities, LGBTQ inclusive curriculums, and book banning make many LGBTQ youth – and trans and nonbinary youth in particular – feel angry, stressed, scared, and sad,” Suffredini explained. “All young people deserve to feel safe, accepted, and able to thrive at school.”

He added that educators and school officials should ensure their LGBTQ students are supported and that they “remain in their corner no matter what rhetoric their state lawmakers may espouse.”

“Young people need this support now as much as ever,” Suffredini said.

What issues are on the minds of America’s LGBTQ youth?

When conducting the poll, Morning Consult asked participants an open-ended question — “What social issue impacting our country/world is the most important to you?”

The respondents were also given a list of issues in order to measure their sources of stress and anxiety. Out of the total respondents, 60% cited mental health, 57% said “not having enough money,” 52% said “efforts to restrict access to abortion,” as issues that gave them stress and anxiety “very often.”

More than 65% of all LGBTQ youth surveyed said that “both climate change and police brutality often give them stress and anxiety,” according to the poll.

Zayde pointed to the overwhelming challenge of how anti-LGBTQ rhetoric and political policies can feed into discrimination and anti-LGBTQ sentiments within these young people’s communities.

“A major issue is that when people see our government acting cruelly toward a minority community, it can feel like that gives permission on a micro level for people to do that in their daily lives too,” she stressed. “If a congressperson, for example, berates the use of correct pronouns, an individual might use that as fodder to do the same, thus enacting a maelstrom of bigoted behavior.”

Essentially, these larger discussions coursing through the nation at large can seep into communities and schools, creating an oppressive, triggering atmosphere for young people, especially those who find themselves at vulnerable ages to begin with.

How to support LGBTQ youth

How can a young person in the greater LGBTQIA+ community protect themselves from this onslaught of legislation and cable news debates?

“Reading or hearing about the wave of anti-LGBTQ legislation that we are experiencing right now can be overwhelming. We encourage LGBTQ young people to take breaks from watching or reading this news as they need to. It’s also important that they know there are many advocates, organizations, and lawmakers who are working hard to protect them, and we have often found success in doing so,” Suffredini suggested. “Last year, LGBTQ advocates and allies defeated nearly 90% of the anti-LGBTQ bills that were considered.”

“This type of news is often difficult to process – and if LGBTQ youth ever need someone to talk to, The Trevor Project’s counselors are here for them 24/7,” he added.

Zayde said it’s all about taking care of yourself.

“Strategies that can help may include being among supportive and loving people, engaging in protests or letter-writing when legislation comes up that negatively impacts the community, limiting media so one isn’t constantly bombarded with the news, joining an LGBT+ support group either online or in person, and talking to a loved one or therapist about how this feels,” Zayde said.

“Stress and anxiety can also be managed by talking to oneself kindly and engaging in things that bring a person joy, whether that’s reading, sports, funny movies, or being with friends. It’s important to balance fighting back against this absurd legislation with self and community care,” Zayde added.

There’s also a clear role family, loved ones, and allies can play.

“Research has found that LGBTQ youth feel supported when parents and caregivers talk respectfully about their LGBTQ identities, act welcoming and kind toward their LGBTQ friends or partners, and educate themselves about LGBTQ issues. It cannot be overstated how impactful adults can be in the lives of LGBTQ young people – especially in this current, politically hostile moment,” he said.

“A small sign of support from an adult can truly be life-saving – having at least one accepting adult can reduce the risk of a suicide attempt among LGBTQ young people by 40 percent,” Suffredini added.

Previous
Caitlyn Jenner says everyone ‘needs to chill’ over pronouns: ‘Pronouns are an overrated’ topic

Next
Prior to the premiere of “Vanderpump Rules” Season 10, Katie Maloney and Lala Kent agree that “Vibes Are Definitely Off” in the midst of a rift