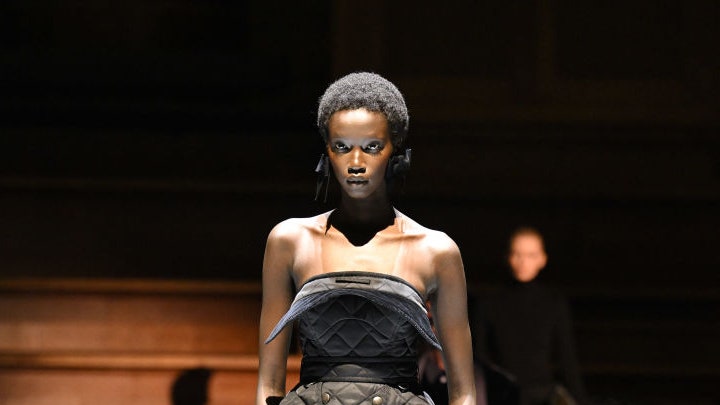 The show marked Burberry’s return to the runway

Nothing says “I’m back” quite like a procession of models marching over a ballroom of banqueting tables to a live orchestra on an afternoon in London. “It was very emotional. It’s our first show live after two years, so it was interesting not working to a computer and being alive and being real,” Riccardo Tisci said after his return to the runway in an off-schedule Burberry show at the Central Hall in Westminster. After two years of digital presentations, he wanted to celebrate the physicality a live show can bring and emphasise the importance of seeing fashion up close. “It’s the relation between the clothes and the people. They were walking among the people. You could really see the work we put into the clothes, which were very street but with hints of couture.”

Tisci decked out his venue like a formal dinner party, each table laid with plates, glasses and cutlery (which had been glued down to the tablecloths). He invited guests – including Adam Driver, Jacob Elordi, Kate Moss and Naomi Campbell – to stand around the tables as the models ceremoniously climbed them to a score by Max Richter, Philip Glass and Michael Nyman performed by the London Contemporary Orchestra. “It was a celebration of Britishness: the regal with the underground and the tough and the rebellious. It’s a punk girl walking on a dinner table,” he said, adding how London had taken centre stage in the collection’s exploration of the dichotomies of British culture. “London is a place of dreams, a capital building on its heritage and unified by its diverse community and an attitude of moving beyond boundaries.”

Identifying Burberry’s historical influence on its country’s dress codes, Tisci took the tropes of the British wardrobes – from heritage to punk – and reinterpreted them through his own irreverent lens. “I deconstructed the past – the knight, the colours of the check – and reconstructed it again, which is very Burberry and very articulated and rich,” he said. “It was important for me to explore what it means to belong, how our roots influence our identity and how the power of community and togetherness is what truly brings meaning to the world.” He expressed it in his most inspired collection for Burberry to date, in a chic and eccentric wardrobe that both elevated and subverted the codes of the house – and of Great Britain.

It was a terrific wardrobe

Tisci’s de- and reconstruction transformed the staples of the British wardrobe. Country outerwear – quilted jackets, field jackets, trench coats, raincoats – were heightened in construction and re-sculpted for a refined silhouette. Twinsets and dresses were encrusted in the motif of the Equestrian Knight logo. Tartan and Burberry’s Nova check were punk-ified in kilts, grunge-ified in overshirts, and chic-ified in long-sleeve

d pleated dresses. Finally, Tisci rolled out a series of evening dresses constructed from carcoats, Harrington jackets and trench coats, culminating in huge ballroom silhouettes in quilted and furry manifestations. Most irresistible were his trompe l’oeil trench coats, printed with their own familiar motif in beige and red contrast colours.

The collection introduced the Catherine, a front-pocket bag created in a shoulder version, as a cross-body bag, and a bum bag, while other models carried pouches printed with trompe l’oeil motifs of British packaging. True to a season that’s seen a lot of shoe elevation, Tisci styled his looks with platformed, thigh-high, slightly fetichised takes on riding boots. Cat-eye sunglasses featured flip-up lenses borrowed from the eyewear of country pursuits, and in the hat department, Tisci threw in a sculptural baseball cap to underline the collection’s urban, contemporary point of departure.

Previous
War in Ukraine: ‘No one wants to die’ – meeting Ukraine’s teenage soldiers
Next
Meet The Jeweller Behind Rihanna’s Maternity Body Chains