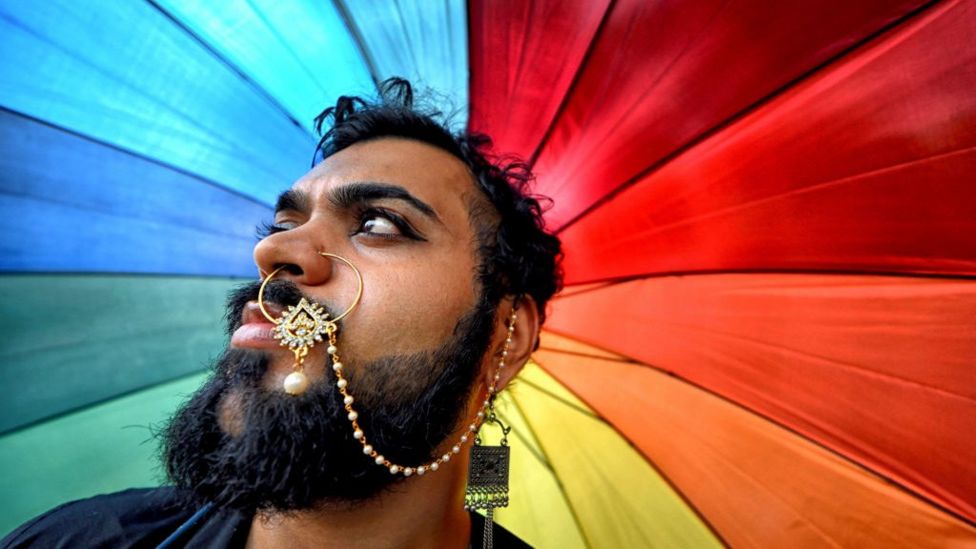 377: The British colonial law that left an anti-LGBTQ legacy in Asia

For much of the past two centuries, it was illegal to be gay in a vast swathe of the world – thanks to colonial Britain.

Till today, colonial-era laws that ban homosexuality continue to exist in former British territories including parts of Africa and Oceania.

But it is in Asia where they have had a significantly widespread impact. This is the region where, before India legalised homosexual sex in 2018, at least one billion people lived with anti-LGBTQ legislation.

It can be traced back to one particular law first conceptualised in India, and one man’s mission to “modernise” the colony.

Currently, it is illegal to be gay in around 69 countries, nearly two-thirds of which were under some form of British control at one point of time.

This is no coincidence, according to Enze Han and Joseph O’Mahoney, who wrote the book British Colonialism and the Criminalization of Homosexuality.

Dr Han told the BBC that British rulers introduced such laws because of a “Victorian, Christian puritanical concept of sex”.

“They thought if there were no regulations, the soldiers would be easily led astray.”

While there were several criminal codes used across British colonies around the world, in Asia one particular set of laws was used prominently – the Indian Penal Code (IPC) drawn up by British historian Lord Thomas Babington Macaulay, which came into force in 1862.

It contained section 377, which stated that “whoever voluntarily has carnal intercourse against the order of nature with any man, woman or animal” would be punished with imprisonment or fines.

Lord Macaulay, who modelled the section on Britain’s 16th Century Buggery Act, believed the IPC was a “blessing” for India as it would “modernise” its society, according to Dr Han and Dr O’Mahoney’s book.

The British went on to use the IPC as the basis for criminal law codes in many other territories they controlled.

Till today, 377 continues to exist in various forms in several former colonies in Asia such as Pakistan, Singapore, Bangladesh, Malaysia, Brunei, Myanmar and Sri Lanka.

Penalties range from two to 20 years in prison. In places with Muslim-majority populations which also have sharia law, LGBT persons can also face more severe punishment such as flogging.

Activists say these laws have left a damaging legacy on these countries, some of which have long had flexible attitudes towards LGBTQ people.

Transgenderism, intersex identity and the third gender, for example, have traditionally been a part of South Asian culture with the hijra or eunuch communities.

“It’s in our traditions. But now we are getting so embarrassed about [LGBTQ relations]. Clearly the change happened because of certain influences,” says Anjali Gopalan, executive director of Naz Foundation India, a non-governmental organisation which offers counselling services for the LGBTQ community.

One common argument governments have made for keeping the law is that it continues to reflect the conservative stance of their societies. Some, like India, have even ironically argued that it keeps out “Western influence”.

But activists point out that this perpetuates discrimination and goes against some countries’ constitutions which promise equal rights to all citizens.

This has a “de-humanising effect” on an LGBTQ person, and can seriously impact their access to education and career opportunities as well as increase their risk of poverty and physical violence, said Jessica Stern, executive director of LGBTQ rights group OutRight International.

“If you’re a walking criminal, you’re living with a burden every day. Whether you internalise it or not, it affects you and everyone who loves you,” she told the Miss Internet.

One recent example her group found was in Sri Lanka, where the police were tasked to distribute emergency rations while the country was under curfew – but some in the LGBTQ community were too afraid to come forward due to the country’s anti-sodomy law.

“People said they have to risk arrest or risk going hungry… it’s a stark life or death choice they have to make,” said Ms Stern.

Some governments, like Singapore, have tried to tread the middle ground by publicly promising never to enforce the law. But the LGBTQ community in the city-state say this is unfair as they live knowing the government could change its mind at any time.

Olivia and Irene Chiong left Singapore five years ago for the US, where they got married and are both legally recognised as the mothers of their two daughters – something that would not be possible back home.

The lack of rights is one reason they find it difficult to return, as well as the refusal among some Singaporeans including government ministers to acknowledge that there is discrimination.

“I think for me the biggest frustration comes from the fact that Singaporeans think everything’s okay – that as long as gay people keep quiet… keep themselves in the closet, it’s fine!” said Olivia.

“There are many rainbow families in Singapore…You can’t just keep sweeping things under the carpet.

“The only reason why Singapore is holding so tightly to (377) is because it gives them the illusion of control,” she said.

A long road ahead

There has been progress – most notably, of course, with the Indian Supreme Court’s decision in 2018 to repeal 377, following years of legal challenges mounted by determined activists.

It was a historic decision and a major step forward for LGBT rights in India. But three years on, there is still a very long way to go in changing cultural attitudes, activists say.

“The most common thing we still see in counselling is families wanting their gay sons to get married (to a woman),” said Ms Gopalan.

“Everything is linked to the family in India, and marriage is a very big part of our lives. So the first issue is acceptance from the family and then by extension, society.”

Activists say more protection is needed, such as anti-discrimination laws. Earlier this month, a court in Chennai ordered officials to draw up plans for reforms to respect LGBTQ rights.

Still, India’s repeal of 377 has helped to lessen the stigma – and inspired other countries.

In Singapore and Kenya, activists have used the repeal in legal arguments against their own colonial anti-homosexuality laws.

Two centuries after it was used by the British as a legal blueprint, India once again is seen as an example to follow – this time to strike down that very law that was exported across Asia.

“It has emboldened others in Asia, unequivocally… it sent a message to all former colonial outposts,” said Ms Stern.

Previous
Homosexuality: The countries where it is illegal to be gay

Next
377A: Singapore to end ban on gay sex